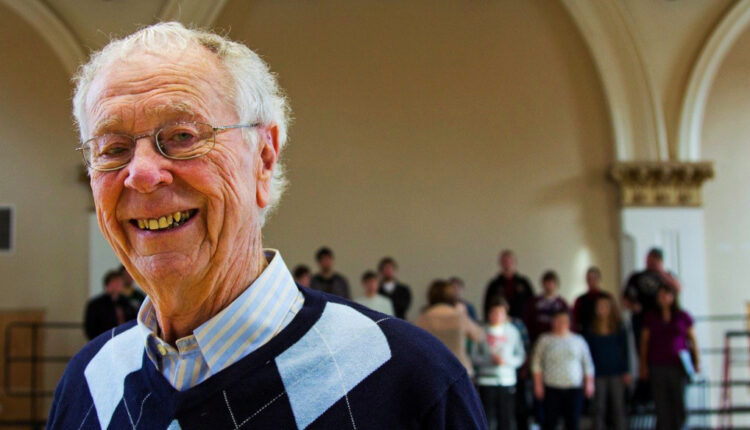 Birder spent more than half a century at St. Norbert.

“Everyone in the St. Norbert College family mourns the loss of our friend and colleague Dudley Birder,” said Thomas Kunkel, interim president. “Indeed, for many Dudley was synonymous with St. Norbert. More than anyone he elevated the modern profile of the college and made thousands and thousands of people around the world aware of it as our foremost cultural ambassador.

“Closer to home, the Dudley Birder Chorale and Music Theater contributed immensely to the cultural life of Northeast Wisconsin and greatly enhanced our collective quality of life. Other institutions tried to lure him away, but for Dudley, this place was home.

“We will be forever grateful to him for his decades of musicianship, friendship and dedication, and our hearts go out to the Birder family.”

Birder was affectionately known as the “Music Man” in the region.

He was a professor of music at St Norbert dating to 1958. He served as artistic director of St Norbert College Music Theater from 1961-2017.

Hundreds of performers and thousands of people experienced the hand of Dudley Birder on musicals for 56 years. In the latter years, he teamed with a son, James P. Birder, and a daughter, Alicia Birder Bakken, to produce the elaborate shows.
Birder founded the community/campus Collegiate Chorale in 1974. The group bears his name. When Birder officially retired in 2018, the chorale named Kent Paulsen, Birder’s long-time assistant, as artistic director.

Paulsen said he feels “a great mix of both sadness and joy – sadness for the loss of a dear friend, but also great joy for the life he has led and what he has meant to me and countless others…

“Much will be shared in the coming days and months about Dudley. Simply put, for more than half of my life I have been connected with Dudley – first as my director, then as a mentor, but most importantly as a dear friend.

“While I mourn Dudley’s passing, I know he is with me every day – not only because I work in his old office, direct the chorale that bears his name and rehearse in the hall named in his honor, but most importantly in the musical inspiration and loving friendship we shared for so many years.”

The chorale presents three to four concerts each year, usually with orchestra. The chorale is a musical organization composed of adult singers from more than 30 communities in Northeastern Wisconsin who come together to sing choral masterworks. Members can range from 15 years old to seniors.

In 2007, the chorale commissioned Randol Alan Bass to write “Psalm 96” in honor of Dudley Birder’s 80th birthday. Each year, the chorale provides scholarship money to students and teachers who excel in choral music. A million-dollar endowment is in place to keep the chorale operating in perpetuity.
In February 2013, Dudley Birder Hall, formerly St Boniface Church, was dedicated. The completely renovated building, located on the corner of Grant and Fourth streets, has Birder’s name attached.
The $1.7 million project, supported by donors, converted the church into a performance space, especially for music. It holds about 200 seats and is used for recitals, chamber concerts and public lectures. It’s also used for Dudley Birder Chorale rehearsals. Much of the work involved installing professionally designed, custom-made acoustical materials for state-of-the-art sound quality.