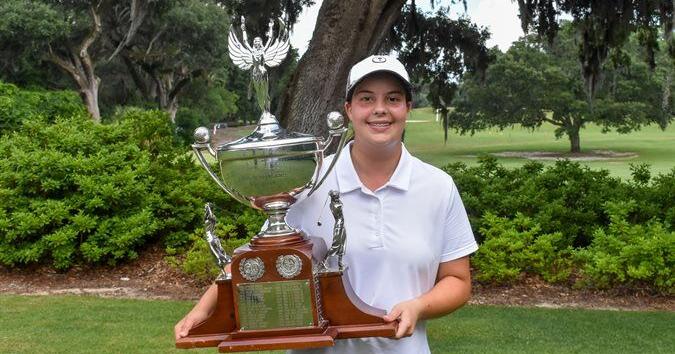 Talledo, from Spartanburg, had a five-shot lead going to the 17th hole, but a triple bogey on the par-4 hole coupled with a birdie by Messimer resulted in a four-shot swing. Talledo then bogeyed the final hole to Messimer’s par, sending the golfers into a playoff. Messimer then birdied the playoff hole for the victory.

Yeamans Hall member Kerry Rutan of Daniel Island won the Carolinas Division by 12 shots, finishing at 5-under-par 211. Rutan also finished as low senior (age 50-plus) and low super senior (age 65-plus) to win all available titles in her division.

The College of Charleston won the Collegiate Cup with Talledo and Smith Knaffle of Murrells Inlet combining for a 3-over-par score of 435.

Jay Smith of Florence won the boys 15-18 age group in the SC Junior Golf Association’s Upstate Junior Classic played at Smithfields Country Club in Easley with a two-day score of 144. Logan Lutz of Mount Pleasant tied for third at 148, and Ryan Bozard of Charleston tied for fifth at 149.

Summerville Country Club will hold its Father-Son/Daughter Tournament on June 25-26. The tournament is a captain’s choice event with an entry fee of $180 per team.

Summerville Country Club’s Roy Meyers Junior Open will be played July 22. The tournament is open to male and female golfers ages 7-18 with a $25 entry fee.