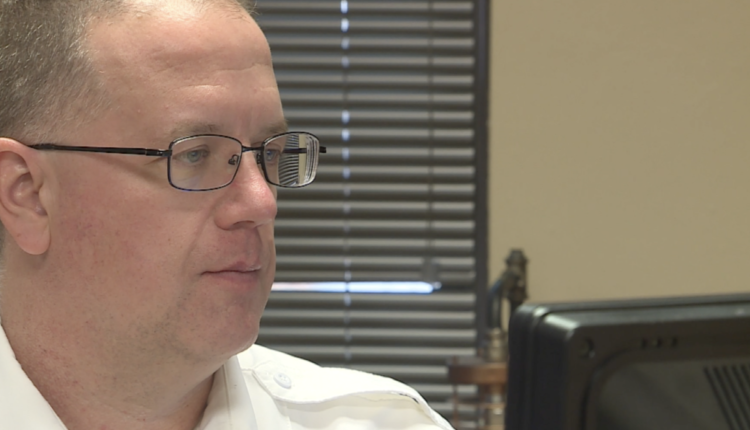 Matthew Knott replaced former fire chief and longtime firefighter David Litton, who was in fire services for more than 40 years.

When you take the reins from someone, it can be a tall task.

But Chief Knott says he is prepared to take on his new and important role.

It’s Knott’s first week on the job in Green Bay.

“Feels great,” Knott said. “I can’t say enough about the community and how welcome I feel.”

As someone from Illinois, Knott followed the Bears.

But now that he’s up here, he says he’s a Packers fan now. He already has a cheesehead and a Packers coffee cup in his office.

“Just seeing what all the Packers have to offer, it’s very exciting,” Knott said.

The new chief has 25 years of experience, and was most recently the division chief in Rockford, Ill.

Goldhahn says the new chief is also good at getting grant funding.

“All departments are struggling with budgets and funding, and communities as well,” Goldhahn said. “And so, he’s done a lot of work on that.”

Knott says he hopes to continue the progress being made to replace Fire Stations 1 and 3.

Both of those stations are around eight to nine decades old.

And Knott says it’s his goal to serve residents the best that the firefighters can.

Not just his goal, but also his promise.

The president of Green Bay Area Fire Fighters, a local union, sent NBC 26 a statement regarding his thoughts about the new fire chief.

Green Bay Area Fire Fighters, IAFF Local 141 is extremely excited to start this new partnership with Fire Chief Matthew Knott. The retirement of Chief Litton left some big shoes to fill, however in this short time already we have seen that Chief Knott is the type of leader that is going to ensure his fire fighters and citizens are protected at all times. Chief Knott brings a wide variety of service related specialty skills that will continue to advance Green Bay Metro Fire Department. We look forward to working under his leadership, proudly serving the city of Green Bay and the Villages of Allouez and Bellevue.