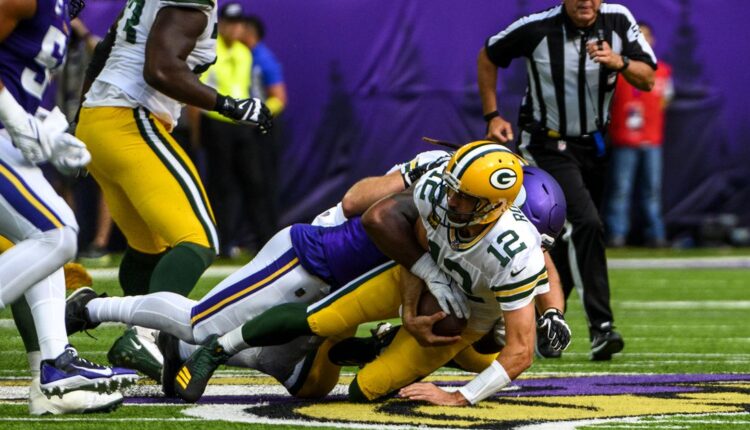 Last week, Acme Packing Company began tracking what the national media said about the Green Bay Packers through some of the more popular power ranking posts on the internet. On average, the Packers were ranked about sixth overall, but that changed quickly following their 23-7 loss to the Minnesota Vikings in Week 1.

Heading into Week 2 of the regular season, Green Bay has fallen down every single one of the rankings that we chose to track this year, dropping down to an average ranking of about eighth in the league. Here’s what writers have to say about the Packers and where they stand in the current landscape of the NFL:

Christian Watson toasted Patrick Peterson on a deep route and had nothing but green in front of him as a perfectly thrown Aaron Rodgers spiral entered his orbit. The ball clanked off Watson’s hands, however, an ominous first play from scrimmage for the 2022 Packers. Green Bay’s attack was held to a single scoring drive in a dispiriting 23-7 loss to the Vikings on Sunday. Watching in real time, it was hard not to think about moments in the game when Rodgers would have looked to Davante Adams to get the offense going. It’s a transition period for the attack, but trust Rodgers to figure things out in time.

They looked awful in losing to the Vikings. Aaron Rodgers got beat up and didn’t play well. A defense that was supposed to be dominant wasn’t.

Aaron Rodgers threw for 133 yards, no touchdowns and had two picks in a 38-3 loss to the Saints in Week 1 last season and went on to win the league MVP award. But this year’s blowout loss to the Vikings feels different. The offensive line is plagued by injuries, Davante Adams plays for the Raiders, and Green Bay’s supposedly stacked defense gave up 184 yards to one player (Justin Jefferson). The Packers need offensive linemen David Bakhtiari and Elgton Jenkins back healthy and literally any receiver to step up to maintain deep postseason contention. It’s wild that Rodgers’s Peaky Blinders haircut was the lone highlight of their season debut.

The Green Bay Packers have problems.

That Minnesota Vikings wide receiver Justin Jefferson roasted the Green Bay defense for 184 yards and two touchdowns on nine catches in a 16-point loss is frankly the least of them. The bigger issue is that with Allen Lazard sidelined by an injured ankle, the entire Green Bay wide receiver corps managed just 151 receiving yards. Green Bay’s top pass-catcher in the game in terms of both catches and yardage was running back AJ Dillon.

While speaking to reporters after the game, Packers quarterback Aaron Rodgers made no excuses for the pitiful performance.

“There’s expectation for whoever’s in there, that they’re going to play well. We had a lot of chances today. I’m not taking anything away from their defense, but we hurt ourselves many times, myself included,” Rodgers said.

It’s not necessarily time to panic—Green Bay got blasted in Week 1 a year ago as well only to go on to win 13 games and capture the No. 1 seed in the NFC. But these Packers didn’t look like a Super Bowl contender in Week 1. Or even the best team in the NFC North.

These Packers looked like a deeply flawed team with problems on offense that may be too much for even Rodgers to overcome.

A lot will be made of the receivers not showing up in Week 1, but missing key offensive linemen David Bakhtiari and Elgton Jenkins was a big deal, too. It’s fair to wonder if Bakhtiari, a fantastic left tackle who has played 27 snaps since tearing his ACL in 2020, will ever get right.

Last week, the only team that was ranked over the Packers on all five power rankings was the Buffalo Bills. After one week of play, the Kansas City Chiefs, Los Angeles Chargers and Tampa Bay Buccaneers joined them. The 0-1 Los Angeles Rams, despite their offensive line troubles and quarterback Matthew Stafford’s visible injured play, held steady with three writers sliding the team ahead of Green Bay.

The following teams lept the Packers, after Green Bay was ranked ahead of them on every list heading into the regular season: Baltimore (four times), Minnesota (three), Philadelphia (three), New Orleans (two) and Miami (one. ) The Dolphins being rated as a better team than Green Bay might be the most hurtful thing said about this squad all week. Bleacher Report really called their shot there.

Thankfully, the Packers have a Sunday Night Football opportunity coming up this weekend that gives them a chance to prove a national audience wrong.