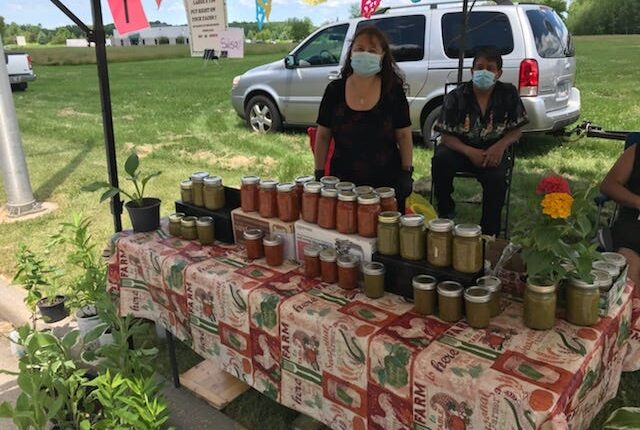 ONEIDA – Organizers for the Oneida Farmers Market have won a federal grant that promises to eventually enhance the weekly outdoor summer event.

The Oneida Nation received the $50,723 grant from the US Department of Agriculture to better develop the Oneida Farmers Market, organizers announced this month.

The three-year grant is designed to expand the number of vendors at the market by teaching farmers on the reservation how to create “value added products.”

These are products created from raw produce using only one or two steps in to extend their shelf life or value, such as through dehydration.

For example, dehydrated white corn is a popular product from Oneida. Farmers and gardeners may also learn how to make jams and preserves through the training program.

More:‘It’s great to embrace who I am.’ Rob Michno, 50, is only now discovering his Native American roots after being adopted and raised by a family of German and Polish descent.

“We don’t know exactly what products they’ll come up with,” said Don Miller, grant specialist for the Oneida Nation. “It’ll be based on what they produce on their farm. Until we actually start training them, we won’t know what’s possible.”

Training is expected to start next year and market organizer Bill Ver Voort expects new products could be hitting the Oneida Farmers Market by late summer or early fall.

Business at the market started to pick up again last summer since the start of the pandemic.

Ver Voort said the market averaged about 42 vendors per week, which was down a couple pre-pandemic, and about 550 customers per week.

In 2020, at the height of the pandemic, the market averaged about a dozen vendors and customers had to drive through in a line, rather than walk around like they can do again now.

Ver Voort said one aspect that sets the Oneida Farmers Market apart from other markets in the Green Bay area is the vendors selling Native American crafts and jewelry, as well as locally grown produce.

He said the serene, natural setting in the woods located at the Oneida Business Park, N7332 Water Circle Place, also sets the market apart from the large one in downtown Green Bay amid the buildings, traffic and crowds.

“For a rural market, I’m very happy with how we do,” Ver Voort said.

Ver Voort said anyone, not just tribal members, is welcome to shop at the Oneida Farmers Market.

“We’d love to see more people from Green Bay and from Seymour,” he said.

Ver Voort isn’t Oneida and lives in Appleton, but he works in the Nation’s community development department.

He started the market in 2002 as a way for tribal members to have access to healthy food to promote good health.

As a result of being forced onto reservations where there was typically poor farmland, many Native Americans developed several diseases because of poor diets.

Some of the top killers of indigenous people are heart disease, cancer and diabetes.

Heart disease and cancer both caused 20% of indigenous deaths in Wisconsin, according to the Wisconsin Department of Health Services.

Indigenous people in Wisconsin are also more than three times more likely to die from diabetes than the white population, according to the state agency.

Ver Voort said he also wanted a place where locals can sell their overflow of garden or small farm produce and can set up for free.

“I don’t charge a dime to vendors,” he said.

Like customers, all vendors are welcome, whether they’re Oneida or not.

The Oneida Farmers Market is open from 3 to 6 pm Thursdays from July through September.

Frank Vaisvilas is a Report for America corps member who covers Native American issues in Wisconsin based at the Green Bay Press-Gazette. Contact him at [email protected] or 815-260-2262. Follow him on Twitter at @vaisvilas_frank. You can directly support his work with a tax-deductible donation online at GreenBayPressGazette.com/RFA or by check made out to The GroundTruth Project with subject line Report for America Green Bay Press Gazette Campaign. Address: The GroundTruth Project, Lockbox Services, 9450 SW Gemini Drive, PMB 46837, Beaverton, Oregon 97008-7105.

Milwaukee flights canceled due to weather, rental cars hard to come by