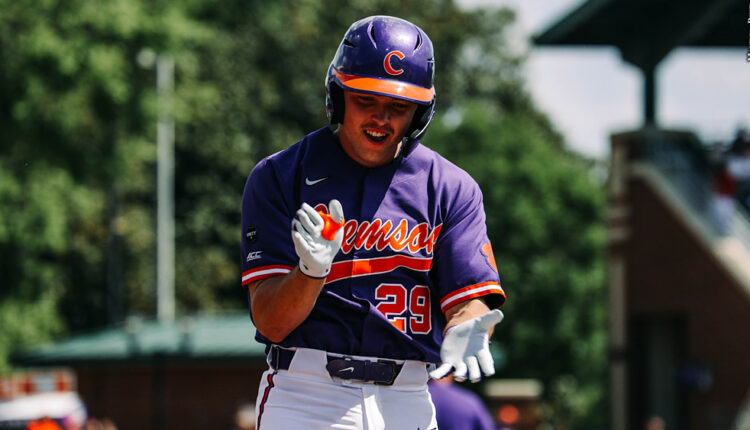 For Orioles infield prospect Max Wagner, getting his offseason work in wasn’t always the easiest task while growing up in Green Bay, Wis., especially when compared to his counterparts in warmer climates.

Wagner initially played baseball, basketball and football as a kid, but it didn’t take him long to drop football despite growing up in the shadow of Lambeau Field. He eventually focused on baseball, which made for some interesting workout sessions in the winter.

“I kind of realized that I was pretty good at baseball, so I just stuck with it,” Wagner said on Glenn Clark Radio Sept. 1. “Granted, training during the offseason when there’s 20 inches of snow is not the easiest. But yeah, just kept on grinding with baseball and things just played out.”

“Forty degrees was pretty much the first month of our season up there in Green Bay,” he added. “You’ve got to make sacrifices if you want to be good one day.”

Wagner was certainly good for Clemson this spring, hitting .369/.496/.852 in 259 plate appearances as a sophomore for the Tigers. His 27 home runs tied Clemson’s single-season record, originally set by Khalil Greene in 2002. He added 76 RBIs, 66 runs, 45 walks and 15 doubles in a remarkable season.

It came after a freshman season in which he hit .214/.305/.345 with seven extra-base hits and was mostly used as a defensive replacement at third base. In fact, he wasn’t even Clemson’s starting third baseman to begin the 2022 season. So, how did it all come together for Wagner?

“I kind of just changed my approach a little bit and saw it a little bit different when I was up to bat [with] what I really wanted to accomplish,” Wagner said. “I did that, trained really hard during the offseason and even in summer ball before the season and really tried to put my approach into the game. That’s exactly what I did come springtime and it just played out for me.”

Wagner was taken by the Orioles in the second round (No. 42 overall) of the 2022 MLB Draft and reportedly signed with the club for a slightly over-slot bonus of $1.9 million. After four plate appearances in the Florida Complex League after signing, Wagner reported to Low-A Delmarva. The 6-foot, 215-pound corner infielder has hit .269/.409/.462 with six extra-base hits for the Shorebirds entering play Sept. 6.

Wagner is focused on using this late-season stint with Delmarva to learn where he has to improve in order to succeed in pro ball. The Shorebirds’ season ends Sept. 11.

“Even if performance isn’t the greatest, it’s all about learning on what you need to work on during the offseason,” Wagner said. “That’s definitely something that I’ve accepted over these games that I’ve been with Delmarva. There’s a bunch of stuff that can be worked on. There’s always a part of your game that needs some work. I guess I don’t really have one thing, but I know there’s a good amount of stuff. I’m ready for the work. This is what I’ve been dreaming about [about] since I was a little kid.”

Jackson Holiday, the No. 1 overall pick of the 2022 MLB Draft, has also gotten time on Delmarva’s infield as the season winds down. Wagner has enjoyed getting his pro career started alongside Holiday.

For more from Wagner, listen to the full interview here:

U.S. labor movement on the rebound