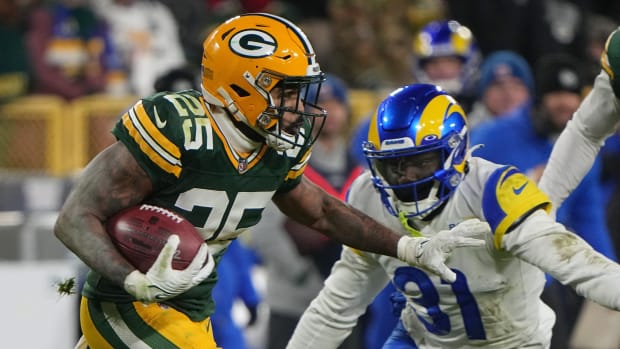 It’s Keisean Nixon, whose rise from anonymous role player to NFL-leading kick returner has perhaps surprised everyone but himself.

“I’ve got supreme confidence, for one. Two, it’s fun,” Nixon said to a throng of reporters on Wednesday. “I don’t want to take it too seriously. I think of everything like I did playing with my friends outside in Long Beach just playing street ball, for real.”

For years, Packers fans have treated kick returns with a sense of doom. Just don’t fumble, they thought. Just kick the ball into the end zone for a touchback, Aaron Rodgers hoped.

Now, kickoff returns come with anticipation. When the Los Angeles Rams pulled within 24-12 late in the third quarter on Monday night, a feeling of electricity, not dread, coursed through Lambeau Field.

“They turned me up,” Nixon said of the fans.

Nixon caught the ball at the 1, shot around the right side and up the sideline for 52 yards. His teammates celebrated. Coordinator Rich Bisaccia raced up the sideline and jumped onto someone’s back.

“I knew I had to make a play,” Nixon said. “Made a play for them, I think. Hopefully, they were happy about it.”

Nixon is quite a story.

As a kid from Compton, Calif., he played in Snoop Dogg’s youth football league and, later, at Bishop Mora Salesian High School in Los Angeles. Scholarship opportunities vanished when he sustained a broken collarbone during his senior year. He wound up going to Arizona Western, a junior college located in Mesa, Ariz. As a sophomore, he earned second-team All-American honors as a cornerback. He also returned two of his nine kickoffs for touchdowns.

That got him to South Carolina. He started at cornerback as a senior, when he returned three kickoffs.

Nixon went undrafted in 2019 and spent three seasons with the Raiders. He played mostly on special teams but returned only six kickoffs.

In free agency this offseason, Nixon signed a one-year deal with the Packers. Amari Rodgers was given the return jobs—and kept the return jobs—for no reason other than being a third-round pick. Nixon, because of his limited experience on kickoff returns and complete lack of experience on punt returns, was never in the mix during training camp.

“It’s just about preparation and opportunity, you know what I’m saying?” he said. “It’s hard sometimes in this league to get opps at anything. You’ve got to think about it. There’s only one kick returner on every team, so that’s only 32 players in the whole world. Whenever you get an opp, you’ve got to take advantage of your opp.”

Who knew that a legend would be born?

In nine games, Nixon leads the NFL with three kickoff returns of 50-plus yards and eight kickoff returns of 30-plus yards. He was given a chance on punt returns when Rodgers finally fumbled his way out of the job against Dallas. In limited opportunities, he’s averaged 15.3 yards. Of his six returns, he’s taken five back at least 13 yards.

What Nixon lacks in experience, he more than makes up for in speed and fearlessness.

“Honestly, I treat returns just like I did in Pop Warner. I just run fast and I’m faster than other people,” Nixon, who was named a Pro Bowl alternate this week, said.

Against the Rams, Matt Gay did something highly unusual. On the opening kickoff of the second half, he kicked one short to the sideline rather than deep to Nixon.

“In all my 18 years, I’ve never once seen until tonight an opposing team’s kicker kick away from one of our returners on purpose. That’s fun,” Aaron Rodgers said. “That’s pretty incredible. He’s been a big difference-maker for us. You hate to do the what-ifs and look-backs, but the ways that certain players are playing for us, you wonder how it would have been if things had been a little different at the start of the season.”

During back-to-back postgame news conferences, Rodgers made a point to discuss Nixon unprompted. After the Chicago game, in the midst of an answer about Jaire Alexander, Rodgers said, “For a long time here, when that ball’s up in the air on a kickoff, I’m thinking, ‘Stay in. Stay in. Don’ don’t bring it out.’ Because not a lot of good stuff happened. But I always tell Kei when he’s about to go out there, ‘Bring it out. Bring that out.’ Just because he brings an extra type of juice to our football team. He’s the type of player I wish I’d had over the course of my career because you feel real good going to battle with a guy like that.”

Comments like that have meant a lot to Nixon, who said he didn’t even talk to Rodgers until after the Week 3 victory over Tampa Bay in which he replaced an injured Alexander.

“I love 12,” Nixon said. “He actually opened me up a little bit to get more comfortable around here. I’m a to-myself type of person. I’m a great locker room guy but just in-my-shell kind of thing and I was new here, and 12 always asked me, ‘Why you so uptight?’ So, he tried to give me a hug and I like pushed him and said, ‘Don’t touch me no more.’ He was like, ‘Just bring it in.’ Felt good. I needed a hug. So, 12 gave me a hug and we’ve been like this ever since.”

Against the Rams, star defensive end Leonard Floyd was talking trash to Nixon. With a kickoff return of 52 yards and punt returns of 19 and 17 yards, Nixon won the war of words and the war of field position.

“I told him I was going to do something with the ball. He told me I wasn’t. So, I had to prove him wrong. That’s what this is about,” Nixon said.

“He came to me after the game. He said, ‘I respect you.’ That’s all you can do in this league is earn other people’s respect around the league. Once you do that, that’s how you know you’re a good player in this league.”

“I think all great players make other players around them better. Most people look at the quarterback position first. When you have a great quarterback, it makes everyone else around you better. It makes everyone a little bit more accountable to their job. So, when you get a guy back there that the blockers feel can go score, I think they’re all trying to get on the punt return team to help you score. I think they’re all trying to do their job a little bit better because it’s getting magnified by the guy behind them that’s really good. So, I think you saw that. I thought those guys did a really good job blocking for him.”

Some good news on the injury front on a short week

A new chapter in the Kenosha casino saga