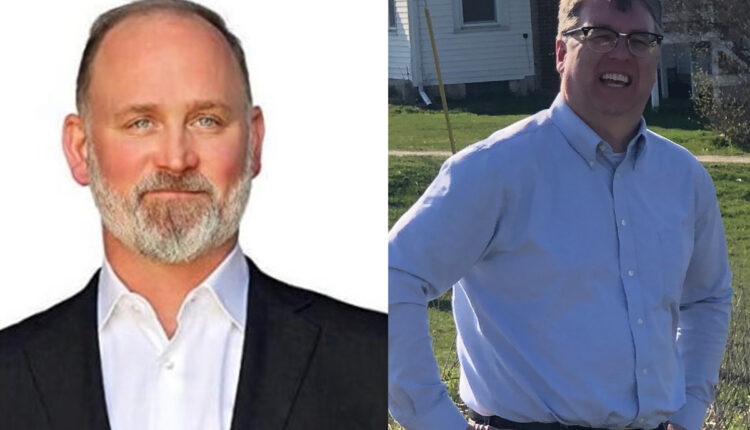 At a prayer breakfast in Sparta last week, Derrick Van Orden, the Republican running to represent Wisconsin’s 3rd Congressional District in the U.S. House of Representatives, said that “leftists” can’t be Christian.

In audio of the remarks, which were first reported by the La Crosse Tribune, Van Orden said that believing in God and being a leftist are incompatible.

“There are many God-fearing Christians who are Democrats, there’s not a single God fearing Christian that is a leftist, because those two things are incompatible,” he said, adding that leftists are false prophets and then going on to make a call for a return to the Judeo-Christian values “this country was based on.”

“I stood with La Crosse area pastors today to respond to Derrick Van Orden’s shocking and outrageous claim that only voters who agree with him politically can be Christians,” Pfaff said in a statement to the Wisconsin Examiner. “This wasn’t just an attack on my faith, my upbringing, and my way of life but on everybody who doesn’t hold the same political beliefs as Derrick. I’m a God-fearing, practicing Lutheran, and like voters in this district — Democrat or Republican — I don’t need Derrick or anyone else to tell me what I can and cannot believe in.”

In a statement to the La Crosse Tribune, Van Orden quoted the Communist Manifesto and said that Wisconsin values are being attacked by the radical left. Van Orden has frequently referred to Pfaff as a “radical leftist” online. Pfaff, a moderate, is a member of the Democratic Party and the Mindoro Lutheran Church in La Crosse County.

“It is undeniable that our Wisconsin values, culture and heritage are under assault by the Radical Left who are trying to destroy the American way of life,” Van Orden added. “I will not pander to anyone for telling the truth simply because they don’t want to hear it; that is the antithesis of leadership.”

Van Orden’s comments echo controversial statements by James Altman, a Catholic priest who used to be the pastor at St. James the Less Church in La Crosse. Altman appeared on a podcast in the days after the attack on the U.S. Capitol on Jan. 6, 2021 to argue it was a “false flag” event staged by Antifa and calling Democrats “godless.”

“No Catholic can vote with [Kamala Harris’] name on the ticket,” Altman, who was later removed from his job by the Diocese of La Crosse, said.

At the prayer breakfast, Van Orden said he’s a member of the Prairie du Chien-based Bible Baptist Church. The church’s statement of faith includes a number of beliefs that attack LGBTQ people and question science. In a section on human sexuality, the statement includes homosexuality on a list of sins including bestiality and incest and states that marriage can only be between a man and woman.

“We believe that God has commanded that no intimate sexual activity be engaged in outside of a marriage between one man and one woman,” the church states. “We believe that any form of homosexuality, lesbianism, bise!uality, bestiality, incest, fornication, adultery, and pornography are sinful perversions of God’s gift of sex. We believe that God disapproves of and forbids any attempt to alter one’s gender by surgery or appearance.”

The church also states that it “rejects evolution,” that men should be the leaders of the home and that a wife should “submit herself to the Scriptural leadership of her husband.”

In an election in which the criminalization of abortion in Wisconsin has become a major issue, the church’s beliefs about the procedure go even further than Wisconsin’s abortion ban, which was instituted in 1849.

“We reject any teaching that abortions of pregnancies due to rape, incest, birth defects, gender selection, birth or population control, or the physical or mental well being of the mother are acceptable,” it states.

Van Orden regularly makes forceful attacks against Democrats, whom he describes as a dangerous threat to the country. He joined protesters of the outcome of the 2020 presidential election on the U.S. Capitol grounds on Jan. 6, 2021. But the church states that its members love their enemies.

“We believe that we should demonstrate love for others, not only toward fellow believers, but also toward both those who are not believers, those who oppose us, and those who engage in sinful actions,” the church states. “We are to deal with those who oppose us graciously, gently, patiently, and humbly. God forbids the stirring up of strife, the taking of revenge, or the threat or the use of violence as a means of resolving personal conflict or obtaining personal justice. Although God commands us to abhor sinful actions, we are to love and pray for any person who engages in such sinful actions.”

Wild Things on Opening For the Who at Madison Square Garden, New LP – Rolling Stone

An Unexplained Injury Discovered After Eye Surgery. What Should Happen Next?