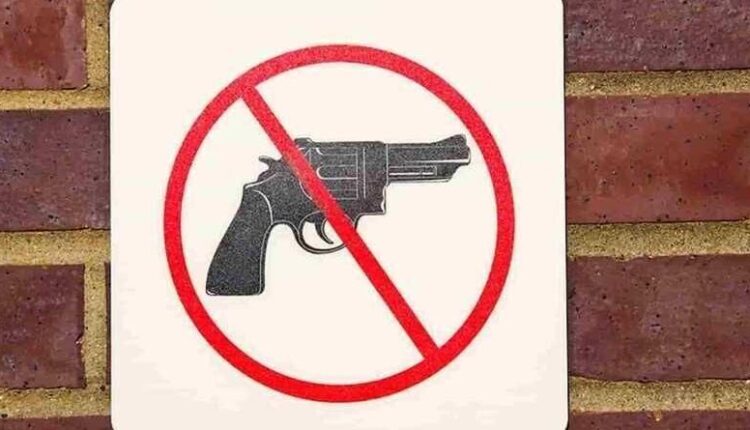 A resolution that would lift the ban on those possessing weapons in some Kenosha County buildings is among the proposals to be considered by the County Board on Tuesday evening.

The proposal is one of three sets to be introduced during the County Board meeting to be held at 7:30 pm in the third-floor chambers of the Administration Building, 1010 56th St.

If passed, anyone age 21 and older who has a valid permit to carry a firearm could do so on county properties, including the Administration Building and at the Kenosha County Center at highways 45 and 50 in Bristol, among other locations. Signs banning firearms would also come down from the properties.

Places where such a ban on firearms are already in effect by state law, such as the courthouse, the Public Safety Building, which houses both sheriff’s and Kenosha Police departments operations, the Downtown jail and the detention center at 4777 88th Ave., would remain intact, according to Supervisor Erin Decker, the County Board’s vice chairperson, who proposed the resolution and two others friendly to gun owners.

The ban on carrying firearms into county buildings has been in effect since 2011 by resolution. It allows only law enforcement officials to possess weapons in such properties.

Decker, who voted against the ban, is calling for amending the resolution based on several factors including Wisconsin Act 35 which allows most adults to lawfully carry concealed firearms if they have concealed carry permits.

“If I go into a building and I’m not allowed to carry a weapon to protect myself, then the county should be protecting me and making sure other people are not carrying weapons,” she said Monday. “So, we banned the guns for people who uphold the law, but there’s no check as in metal detectors for people that ignore the law.”

According to Decker, the rationale for the resolution amendment lies in reducing the county’s liability and would result in lower insurance costs to the county, as well.

“When concealed carry was passed back in 2011, it gave immunity to businesses that allowed people to conceal carry,” she said. “If a business does not allow concealed carry, then they are responsible and liable for any incidents that happen. So (the county) would be on the hook for anything that happened.”

“If someone got shot they could easily sue the county and we would be liable for it,” Decker said.

She said that the county’s liability insurance rose as a result of banning weapons in the buildings.

The other reason for lifting the ban is because the city does not currently have one in place for its public buildings.

“I know people don’t understand the difference between county buildings and city buildings, so it’s also nice to have them the same,” she said.

Sheriff David Beth, however, initially raised concerns that the resolution being proposed in lifting the ban in county buildings, would include areas such as the Public Safety Building, because law enforcement officers “don’t need the stressors that already come with this.”

Beth also wondered what effect no longer barring weapons in buildings such as the Administration Building would have on nearby public properties in the civic campus, such as Reuther High School and Harborside Academy, where state statue prohibits the possession of weapons 1,000 feet from schools.

Beth noted weapons being a concern in the civil unrest and rioting in August of 2020. He said he believes the statute covers all of the campus that contains the county Administration Building, the courthouse, the district attorney’s office and the Public Safety Building.

Decker said state law already defines that weapons are not allowed on school property and that those who have permits know that they are not allowed to carry them there.

“Concealed carry owners know that they can’t carry per the state statute and they know what they have to follow,” she said.

Two other resolutions also authored by Decker, include one that would declare Kenosha County a Second Amendment “sanctuary county” and would ask the sheriff to exercise discretion in not enforcing against any citizen any “unconstitutional firearms law,” or appropriate funds for such enforcement. The resolution also calls for opposing the enactment of any legislation infringing on the Second Amendment to the US Constitution, which allows people to keep and bear arms.

Despite the constitutional right, however, Decker said federal laws are already being eroded for gun owners.

She said several counties have passed “other sanctuary laws, like sanctuary cities for illegal immigrants.”

A third resolution asks that the board authorize conducting a countywide advisory referendum that calls for making Wisconsin a Second Amendment sanctuary state. Under the proposal and if passed, the referendum would be held during the Nov. 8 general election.

The board is not expected to deliberate on the three resolutions, which are expected to be deferred to their appropriate committees and discussed in the coming weeks.