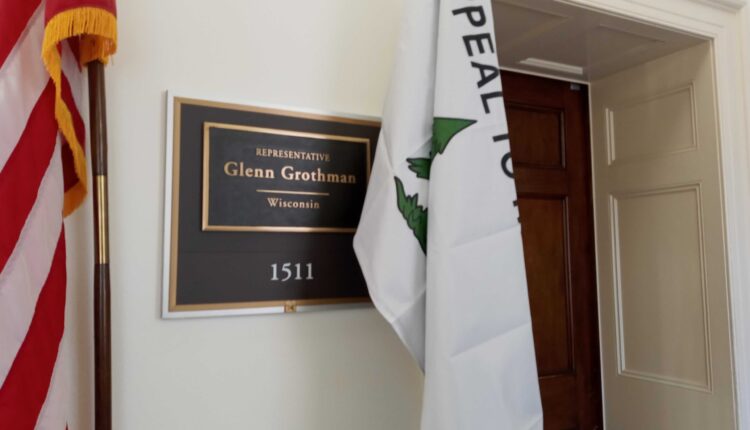 U.S. Rep. Glenn Grothman has a Christian nationalist flag connected to the Jan. 6 attack on the U.S. Capitol displayed outside his congressional office.

On Friday morning, Grothman posted a picture of the flag — which shows an image of a pine tree and the phrase “An Appeal to Heaven” on a white background — to his Twitter account with a message inviting people to visit him in the Longworth House Office Building.

“With the 118th Congress underway, the People’s House has finally reopened to visitors,” Grothman wrote.  “If you’re in Washington DC, I encourage you to stop by my office and say hello!” A white flag with a pine tree and the phrase “Appeal to Heaven” is visible in the photo, placed closer to the door than the U.S. and Wisconsin state flags.

With the 118th Congress underway, the People’s House has finally reopened to visitors.

If you’re in Washington #DC, I encourage you to stop by my office and say hello! #WI06 pic.twitter.com/9ECLp4GXck

Grothman’s office did not respond to a request for comment about the decision to display the flag, but experts say it has ties to a sect of Christian nationalism that was deeply connected to the planning of the Jan. 6 riot. Christian nationalism is a belief that Christians must fight to take back America from non-Christians.

Matt Taylor, Protestant scholar at the Institute for Islamic, Christian, and Jewish Studies, tells the Wisconsin Examiner there were possibly hundreds of Appeal to Heaven flags flying on the Capitol grounds on Jan. 6 and at least two documented instances in which the flags were flown by rioters who breached the building that day.

The Appeal to Heaven flag, which was designed during the American Revolution and used by the Massachusetts Navy, is associated with George Washington because he commissioned a number of ships that flew the flag. The phrase is taken from the philosopher John Locke and is meant to symbolize citizens’ right to armed revolution against tyranny.

Taylor’s research has found that a group of Christian leaders heavily involved in the planning of Jan. 6 have adopted the flag as a symbol of their beliefs.

The flag has also been displayed in a number of state capitol buildings, including Arizona, Missouri and Illinois. Former Pennsylvania gubernatorial candidate Doug Mastriano appears to have a particular fondness for the flag, having made a number of television and public appearances with the flag nearby.

“The prevalence of the Pine Tree flag could be viewed as a dog-whistle signaling kinship between these far-right and white supremacist movements and the Christian Nationalist and Christian Dominionist movements,” Columbia University’s Tow Center for Digital Journalism reported in 2021.

Displaying  flag, as with other right-wing memes, comes with a certain amount of plausible deniability, according to Taylor. Because of its connection to the American Revolution, he says people can say they’re just supporting its history.

“It’s a coy symbol in some ways,” Taylor says. “It’s become a potent Christian nationalism symbol, but when people get called on it they say ‘it’s just a reference to George Washington or American history.”

It’s unclear why Grothman chose to display the flag outside of his office and Taylor says he doesn’t want to guess at the intent, but that it definitely sends a signal.

“He’s obviously sending a statement with it,” Taylor says. “It’s definitely attached to this right-wing Christian mobilization. I don’t know whether Rep. Grothman knows about the flag. I wouldn’t want to attribute consciousness but it’s definitely sending a signal.”