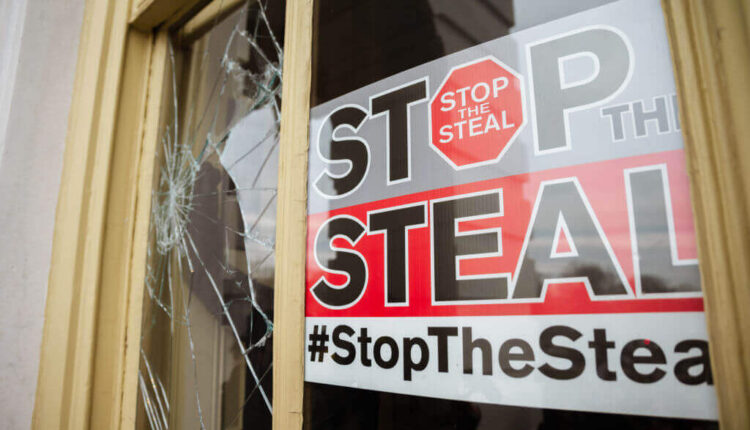 A report published last week by online democracy protection outlet Just Security makes the case that the 10 Wisconsin Republicans who cast false Electoral College votes for former President Donald Trump in 2020 can and should be charged with felonies. The report argues that the false electors possibly violated a number of state laws and in doing so committed crimes that carry penalties of up to 15 years imprisonment.

In the weeks after President Joe Biden won the 2020 election, as Trump’s campaign and Republicans across Wisconsin and the country attempted to find every legal avenue and back alley to overturn the results, the 10 Republicans met in secret on the same day that Wisconsin’s electoral college voters are statutorily required to meet and cast their votes.

While the actually elected voters met in public in a meeting broadcast on Wisconsin Eye, the false electors met secretly in the state Capitol and cast votes for Trump. A key point made by the report is that the fake electors cast their ballots hours after the state Supreme Court, in a 4-3 decision, ended the Trump campaign’s lawsuit to have thousands of absentee ballots cast in Dane and Milwaukee counties tossed out.

The report states that the false electors knew of the court’s decision and knew that this was the end of the line for Trump’s efforts to change the results. Because there was no longer a possibility of Trump being declared the winner in Wisconsin, the report states the electors’ actions possibly constituted forgery, falsely assuming to act as a public officer, misconduct in public office, simulating legal process as well as conspiracy and party to a crime.

“By that point, the Trump team had exhausted all available legal mechanisms for challenging the outcome within the state judicial system, including the Wisconsin Supreme Court,” states the report, written by Gretchen Knaut, the research director of a Washington D.C.-based voting rights law firm, and Shan Wu, a former federal prosecutor. “Wisconsin voters and courts alike had definitively spoken in favor of the Biden electors. Yet the 10 would-be Trump electors persisted in gathering and submitting their own votes, thereby attempting to usurp the will of the people, the judiciary, and the foundations of U.S. democracy itself.”

The votes of the false electors, the report argues, played a direct role in the chain of events that caused the Jan. 6 riot at the U.S. Capitol — including the actions of Sen. Ron Johnson, whose aide attempted to have the false votes from Wisconsin and Michigan passed along to Vice President Mike Pence as he counted the votes that day.

The report outlines all the elements present to make the case for charging each felony and breaks down what the electors’ defense would look like and how it could be taken apart.

“Only by holding the ten individuals in Wisconsin and their co-conspirators accountable for their actions can we hope to repair the damage they inflicted, and to discourage others from following in their footsteps,” the report states.

A number of voting rights advocates in Wisconsin have pressed to have the false electors held accountable since taking their votes, yet so far no action has been taken. The electors, Carol Brunner, Mary Buestrin, Darryl Carson, Bill Feehan, Scott Grabins, Andrew Hitt, Kathy Kiernen, Kelly Ruh, Robert Spindell and Pam Travis have not faced any consequences, and in some cases have continued to hold positions of power within the state party and the government.

The voting rights focused legal outfit, Law Forward, has been one of the few organizations within the state pushing for the electors to be held accountable. In 2021, the firm filed a complaint with the Wisconsin Elections Commission alleging that the false votes constituted election fraud.

In March, the commission unanimously voted to dismiss the complaint. Spindell, a Republican-appointed member of the commission, was able to cast a vote on the issue that involved his own actions.

In February, attorneys for Law Forward sent a letter to Dane County District Attorney Ismael Ozanne urging him to investigate the false electors for potential crimes. That letter argues the electors committed many of the same crimes alleged in this week’s report.

“We respectfully suggest that it is within the duties of your office to promptly investigate and prosecute to the fullest extent of the law the apparently felonious acts described here,” attorneys Jeff Mandell and Mel Barnes wrote. “What is most important is that the unbridled and unlawful attacks perpetrated … against the fundamental precepts of American democracy, both here in Wisconsin and more broadly, never recur. Unfortunately, developments over the past year clearly establish that the only way to ensure that these attacks do not recur — or worse, become a routine part of our presidential election cycle — is to hold the fraudulent electors and anyone else responsible for their conduct accountable. We are determined to see that happen.”

In May, Law Forward and Georgetown University Law Center’s Institute for Constitutional Advocacy and Protection, filed a civil lawsuit in Dane County against the false electors arguing that a court should declare they engaged in a civil conspiracy and be held responsible for the damages their actions caused. In June, that lawsuit was moved to U.S. District Court where it is currently pending.

Calls have also been made for Wisconsin’s Democratic Attorney General Josh Kaul and the U.S. Department of Justice to investigate the false electors, but so far no action has been taken. The electors have sparked the interest of the investigators working for the congressional committee reviewing the events that led to the Jan. 6 attack. Earlier this year, Hitt, one of the electors who was at the time the chairman of the state Republican party, was subpoenaed by the committee.

After Tuition, Books, and Room and Board, Colleges’ Rising Health Fees Hit a Nerve