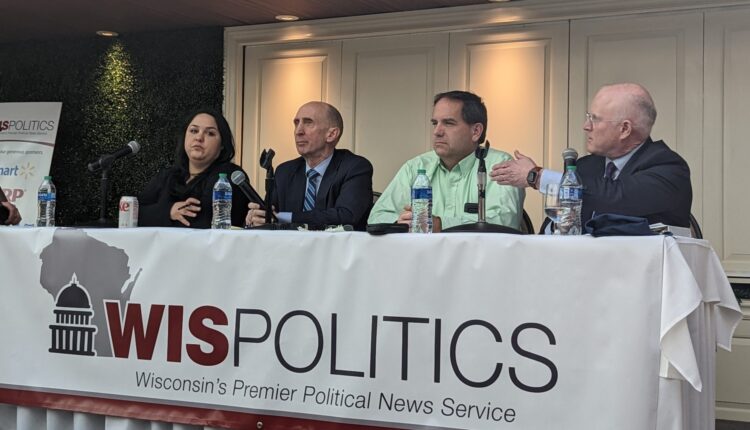 Democratic and Republican strategists detailed their midterm election forecasts on Tuesday, disagreeing over Republicans’ potential for achieving supermajorities in both of Wisconsin’s state houses.

With election day less than three weeks away, the significance of Republicans’ supermajority potential has been magnified. A two-thirds majority in the state Senate and Assembly would allow Republicans to overturn potential vetoes by Gov. Tony Evers, who has vetoed a record number of bills, should he win reelection against GOP nominee Tim Michels.

Republicans, however, need to hold all of their current seats and flip five additional seats to achieve the two-thirds majority in the Assembly. Achieving this in the Senate will be slightly less difficult as Republicans need only gain one seat there.

During the panel discussion hosted by WisPolitics.com, Republican panelists Joe Handrick and Scott Jensen — both former state legislators — were mostly confident in the party’s chances of winning the supermajority in the Senate and Assembly.

“It’s somewhere between a very good night and a great night for Republicans in this state at the legislative level,” Jensen said.

Chuck Chvala and Liz Treviño, the Democratic panelists, argued that the path to the supermajority in both houses is unlikely, and that abortion could be the reason Republicans fall short of this goal.

“I don’t think that, in the Assembly, Republicans will get there,”Treviño said. “I do think it’s possible in the Senate. It’s likely in the Senate.”

Handrick said a giant red wave is unlikely this year, but there is a good chance the party will win enough races to achieve the supermajorities. He attributed potential success to Republicans’ focus on issues like the economy, crime and President Joe Biden’s performance in the White House, saying they will help them win some tight races.

Jensen added that Democrats’ messaging on issues like abortion, Trump and democracy isn’t strong enough for them to win where they need to.

“If abortion is as dominant an issue as it was [in Kansas and Alaska], you could see this be a very different landscape,” Chvala said.

Handrick — who has contributed to previous redistricting processes — acknowledged the advantage of the maps for Republicans: “Yes, the map was drawn by Republicans,” he said. “It’s a favorable map to Republicans that expands the size of those majorities. I don’t think anyone would be wise to deny that.”

Despite this, Handrick said the map isn’t driving Republican majorities in the state. He said Democrats are recruiting the wrong candidates in rural areas of Wisconsin.

Treviño, Wisconsin state director of All On The Line, a national organization combating gerrymandering, said blaming Democratic difficulties completely on their ability to connect with voters is disingenuous.

“The problem here is that in 2011 maps were drawn for Republicans to withstand waves…” she said. “[The new] maps not only perpetuated the gerrymander, but further reinforced the situation we’re in now, so I think it puts Democrats, and puts voters, in a terrible place for representation.”

How did Milwaukee build the massive pier home to Harbor House?