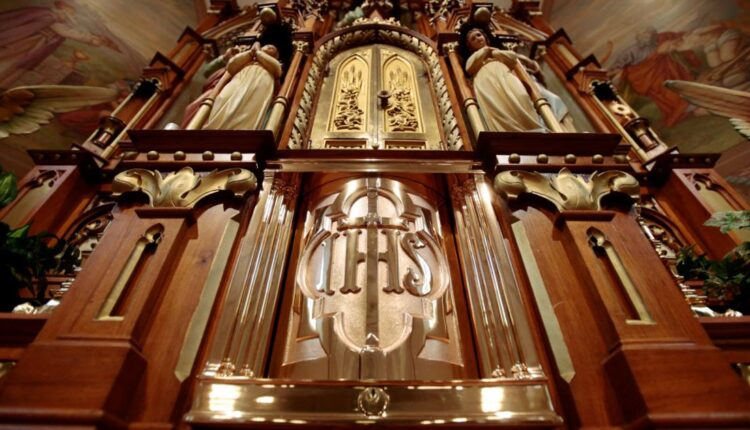 Retired Milwaukee Archbishop Rembert Weakland, a leading Catholic liberal who pushed for social justice and increased power for women in the church before he resigned amid a sex and financial scandal, has died. hey what 95

A classically trained musician who spoke multiple languages, Weakland died overnight at Clement Manor in Greenfield, where he lived following a long illness, the Archdiocese of Milwaukee said Monday.

This Aug. 28, 2002, photo shows retired Archbishop Rembert Weakland at the Cathedral of St. John the Evangelist in Milwaukee. Weakland, a liberal voice in the American Catholic Church who left his position amid the church’s global crisis over sexual abuse of minors, has died at age 95, the archdiocese said Monday.

“For a quarter of a century, Archbishop Weakland led the Archdiocese of Milwaukee and his leadership embodied his Benedictine spirit,” Milwaukee Archbishop Jerome Listecki said in a statement.

The archbishop, who spoke publicly about his struggles with being gay, stepped down after a former Marquette University theology student revealed he had been paid $450,000 in 1997 to settle a sexual assault claim against Weakland two decades earlier. The money came from the archdiocese, though Weakland maintained the contact was consensual.

The settlement came to light as the church was dealing with a national scandal that erupted when the Boston Globe published a series of articles about child sexual abuse by priests. Victims in Milwaukee and other cities began coming forward with claims of their own.

Weakland had expected the public to understand that his settlement with the former theology student, Paul Marcoux, was different from sums paid to child sexual abuse victims, but he acknowledged in his 2009 memoir that was naive.

“Most papers just tossed it into the hopper with the others, no distinctions being made,” he wrote.

Weakland had submitted his resignation on his 75th birthday in keeping with church policy. Pope John Paul II accepted it after Marcoux appeared on national television to accuse the archbishop of date rape.

Weakland told The Associated Press in 2009 that he had tried to leave his bitterness behind.

Born in 1927 in a hotel owned by his father and grandfather in Patton, Pennsylvania, Weakland was named George Samuel after his maternal and paternal grandfathers. He received the name Rembert nearly two decades later when he took vows as a Benedictine monk.

A fire destroyed the hotel in 1929, just as the Great Depression was starting. The combination sent the family into financial ruin and drove Weakland’s father to drink and despair. Basil Weakland died of pneumonia the day after his son’s fifth birthday.

Weakland told The Associated Press in 1984 that growing up on welfare after his father’s death was a major influence in his life.

As archbishop, he helped craft a 112-page pastoral letter from the nation’s bishops that decried high unemployment, homelessness and hunger and described huge income gaps between the rich and poor as morally unacceptable. Released days after former President Ronald Reagan’s reelection, the letter sharply contrasted with the Republican administration’s hands-off economic policies.

Weakland pushed to increase women’s role in the church and to make it more welcoming to them. He created a task force that recommended women be permitted to preach and be considered for ordination.

Outside the church, he was a pianist who studied at The Juilliard School and earned a doctorate in musicology from Columbia University. Weakland also spoke six languages ​​— English, French, German, Italian, Spanish and Latin — and was elected to lead the Benedictine monks at age 40.

But his star began to fade as the church’s leadership became more conservative under Pope John Paul II. The archbishop’s public comments on abortion, married priests and the use of condoms to prevent the spread of HIV put him in conflict with other church authorities.

The Milwaukee archdiocese had been struggling with child sexual abuse before Weakland took office. He continued a practice of seeking treatment for offending priests and transferring them to new churches but eventually came to see pedophilia as an incurable disorder.

In 1992, he dismissed Rev. William Effinger from a Sheboygan parish and publicly apologized during a Mass for assigning him there following abuse allegations in 1979. Effinger died in prison after being convicted of child abuse.

Yet Weakland still seemed to blame some victims, and many felt the archdiocese maintained a hostile atmosphere toward them under his leadership.

“Sometimes not all adolescent victims are so ‘innocent.’ Some can be sexually very active and aggressive and often quite streetwise,” the archbishop wrote in a 1988 diocese newspaper article.

The article focused primarily on Weakland’s call to remove abusive priests from the church, and he later regretted the comments about victims. He wrote in his memoir of his earlier failure to comprehend the impact of sexual abuse on children.

“If I have any sadness, it is that we have made too little progress in understanding and helping victims regain a full life,” he added. “Too many seem to be left in anger.”

The Sacred Heart of Mary Church in Boulder County in Colorado was vandalized May 3 with the spray-painted words “my body, my choice” after the draft opinion to overturn Roe v. Wade was leaked. Other graffiti on the church stated “keep your religion off our bodies” and “(expletive) the church.” A few days later on Saturday, another Catholic church in Colorado was vandalized, this time in Fort Collins. Read more about the incidents in The Denver Post and Denver 7 News.

Two Molotov cocktails were thrown at an anti-abortion organization in a suburb of Salem, Oregon, on Sunday after an unsuccessful attempt to break in, the Associated Press reported. Keizer police said the small fire caused minimal damage, seen above.

About 100 demonstrators protested outside the home of conservative US Supreme Court Justice Samuel Alito in Virginia on May 9, one week after his leaked draft opinion indicated the court is prepared to overturn the landmark Roe v. Wade abortion ruling, Bloomberg News reported. Another crowd of about 100 marched May 7 from Justice Brett Kavanaugh’s house in Chevy Chase, Maryland, to Chief Justice John Roberts’s residence about a half mile away.

If the US Supreme Court overturns Roe v. Wade and Wisconsin reverts to an 1849 state law banning abortions, providers might set up an abortion clinic just over the Illinois state line or “clandestinely” provide abortions using pills, a Madison doctor said.

Adam Woodford, center, with his kids, from left, Odessa, 7, Emilio, 10, and Oliver, 13, right, attend a protest outside the state Capitol in Madison on May 3. They were among more than 1,000 who gathered outside of the Wisconsin Capitol to protest the potential overturn of Roe v. Calf.


Stay up-to-date on the latest in local and national government and political topics with our newsletter.