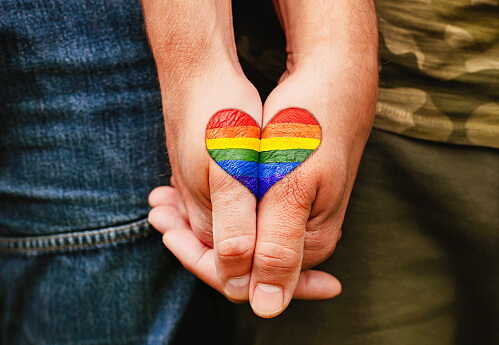 A leaked draft opinion that shows the conservatives on the U.S. Supreme Court are poised to overturn Roe v. Wade, ending the constitutional right to an abortion, has led people to worry that the right to same-sex marriage could be next.

That worry comes from Justice Samuel Alito’s interpretation of what counts as a right. He wrote in his draft opinion overturning Roe that any right not explicitly stated in the Constitution must be “deeply rooted in this Nation’s history and tradition,” leading to the belief that he and the court are hostile to court precedents set in cases such as Loving v. Virginia which allowed interracial marriage and Obergefell v. Hodges, which allowed same-sex marriage.

In Wisconsin, the end of Roe means that a law still on the books from 1849 will take effect making it illegal for someone to get an abortion unless the mother’s health is at risk. The state similarly still has a provision in its constitution outlawing same-sex marriage, but it wouldn’t be immediately triggered if Obergefell were overturned, according to Larry Dupuis, legal director at the Wisconsin chapter of the American Civil Liberties Union (ACLU).

“Obviously the decision and its fundamental reasoning about what counts as a fundamental right is definitely concerning for a whole host of things, contraception and same-sex relationships among them,” he says. “There are at least some distinctions, and the opinion itself points to some of them, saying that this decision doesn’t necessarily mean that those are in jeopardy. Certainly the overall reasoning of it is definitely concerning. If there are ways that anti-LGBT folks can try to get that issue in front of the courts, it could be problematic.”

In 2006, Wisconsin voters approved a referendum to amend the state constitution and ban same-sex marriages.

In 2014, the ACLU filed a lawsuit, Wolf v. Walker, to challenge the amendment and a federal judge agreed, deciding that it violated the U.S. Constitution’s equal protection clause. The decision was upheld by the 7th Circuit Court of Appeals. A year later, Obergefell was decided, giving same-sex couples across the country the right to marry.

Even if Obergefell were overturned, Dupuis says, the Wolf decision is still the law of the land in the 7th Circuit, which includes Illinois, Indiana and Wisconsin. The Wolf decision would remain in effect because it was decided on different legal grounds than Obergefell, offering some tenuous protection.

“It’s binding law in the 7th Circuit and would still remain in effect even if Obergefell were overruled because it’s on technically separate grounds,” he says. “I don’t think that’s a lot of comfort. If the Supreme Court were to overturn Obergefell, the next step would be to attack the decisions based on equal protections.”

“So there’s at least a handful of steps,” he continues. “It’s not like all of a sudden marriage equality is gone in Wisconsin with one stroke. But it’s still the signals the court is sending, particularly if the decision comes out anything like the draft opinion that Alito has written. It’s certainly worrying.”

If Obergefell were overturned and someone were trying to end marriage equality in the 7th Circuit, that challenge could possibly come from a government official who refuses to issue marriage licenses to same-sex couples, according to Dupuis.

“It may be something like a county official refusing to provide a marriage license on the grounds they think they have the right to do that under the state constitutional amendment,” he says. “One question there is, would they have standing to just seek declaratory relief? That’s one mechanism, some government official saying they want to follow the amendment rather than the injunction.”

If a case were brought to challenge the Wolf decision, Dupuis says the ACLU would defend its initial work, but he also says more is required because, after Roe is overturned, the courts may not be a trustworthy forum for protecting people’s rights.

“It really does underscore the limits of the law, of legal claims, as the only way of protecting civil rights and civil liberties,” he says. “You can’t rely on that entirely. The courts are sometimes hostile. People who care about civil rights and liberties have to vote. People who care about civil rights and civil liberties have to seriously look at the candidates’ positions on those issues and make that a major part of why they vote. Abortion became this litmus test for a whole range of voters. People have to realize if they want to protect their civil liberties they have to be motivated to get out and make that happen. We can’t always rely on the courts.”

“We would defend the decision in Wolf v. Walker if someone were to try to attack it, but I also don’t want to suggest that we should rely on it,” he adds. “LGBT rights, as much as they’re under attack right now, if you look back 20 years we’ve made huge progress. That’s partly because of people showing we’re all human and we all have a right to exist and be able to thrive in this culture, supposedly E Pluribus Unum — out of many, one. That seems to be lost, and we have to get back to it.”