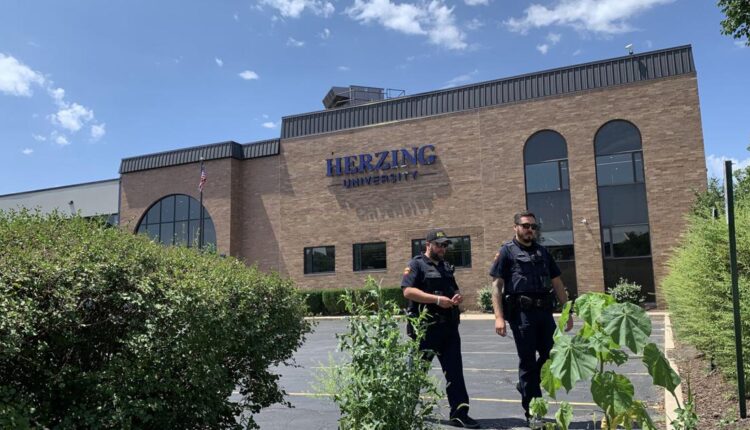 The second bomb threat this week at a local college forced Herzing University, 5800 Seventh Ave, to evacuate students and staff for about an hour. That gave time for Kenosha Police Officers to search classrooms for a supposed bag with a timer that was counting down.

KPD received the bomb threat sometime before noon, which described a backpack with a timer, claiming it was located in one of the school’s nursing classrooms. Police contacted the school. After officers found no explosive devices, students and staff returned to their classrooms before 12:30 pm

Erin Ginn, Herzing’s senior director of admissions, what the senior-most school official on scene when the evacuation began. Ginn said approximately 70 people were evacuated from the building.

“The priority was students and faculty safety,” Ginn said. “We evacuated immediately while police inspected the building.”

Students said they learned something was wrong as staff ran room-to-room instructing people to exit the building. Micaela Pasillas, a student at Herzing, was standing across the street from the building with other students. She said she and friend were studying for an upcoming test when the evacuation began.

“We were in a study hall when someone came in and told us to skedaddle,” Pasillas.

Despite the bomb threat, students and staff alike seemed largely unworried. After less than an hour, KPD officers on scene had finished their search and determined the building to be safe. Despite some light-hearted protests from students, classes and tests resumed.

The bomb threat comes after a similar case at Carthage College Tuesday, occurring shortly after 3 pm The threat forced an evacuation of campus buildings out of “an abundance of caution,” according to the college’s associate vice president for marketing and communications, Elizabeth Young.

“If someone is identified, they will likely face charges of terrorist threats, which is a felony,” Nosalik said.

It was uncertain if the two calls were related as of press time Thursday. Anyone with information on either bomb threats should call Crime Stoppers 262-656-7333.