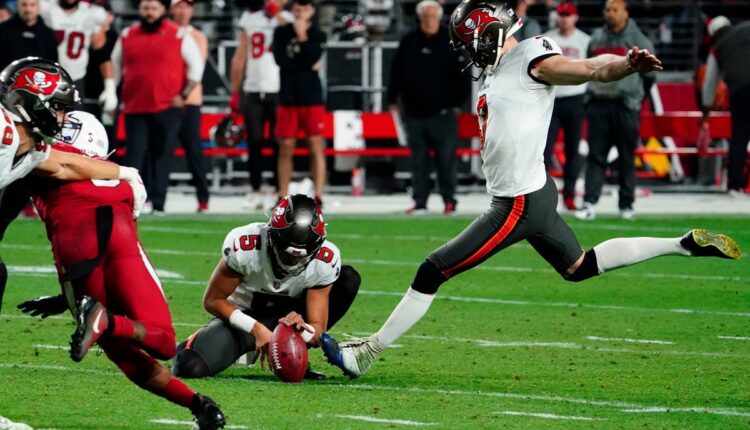 The Tampa Bay Buccaneers kept their NFL playoff chances in their own hands with a come-from-behind 19-16 overtime victory against the Arizona Cardinals on Christmas Day.

The visitors stayed top of the NFC South after overcoming a 10-point fourth-quarter deficit in Glendale, with kicker Ryan Succop the hero with four field goals including the winning 40-yarder in overtime that capped a nine-play, 66-yard drive .

Tampa can clinch the division and a postseason spot when they host the Carolina Panthers on New Year’s Day, though defeat would open the door for their opponents and the New Orleans Saints.

Tampa Bay quarterback Tom Brady’s struggles continued, though, with the 45-year-old leaving State Farm Stadium with the unenviable statistic of having thrown at least two interceptions in three straight games – he mixed one touchdown with two picks on Sunday – for only the second time in his 23 years in the league.

The Green Bay Packers kept alive their playoff hopes with a 26-20 win at the Miami Dolphins.

Miami quarterback Tua Tagovailoa threw three interceptions in the fourth quarter as the Packers won for the third straight week.

Aaron Rodgers threw for 238 yards and one touchdown as the Packers took their record to 7-8 in the NFC and need two more wins plus another result to go their way to secure a fourth straight play-off campaign.

But the Dolphins’ fourth consecutive loss means the 8-7 side now need two wins or a win at New England and the New York Jets to lose to Seattle in Week 17 to make the postseason in the AFC.

Russell Wilson had a day to forget as his Denver Broncos were embarrassed 51-14 by the Los Angeles Rams.

The veteran quarterback threw two interceptions in his first three pass attempts, while on the other side of SoFi Stadium new Ram Baker Mayfield was setting a record.

The former number one overall pick, who only joined the reigning Super Bowl champions on December 9, threw two touchdowns as he went 24 of 28 for 230 yards through the air, with his 85.7 per cent completion rate surpassing the Rams’ single-game record .

At least one hospitalized after Beltline crash