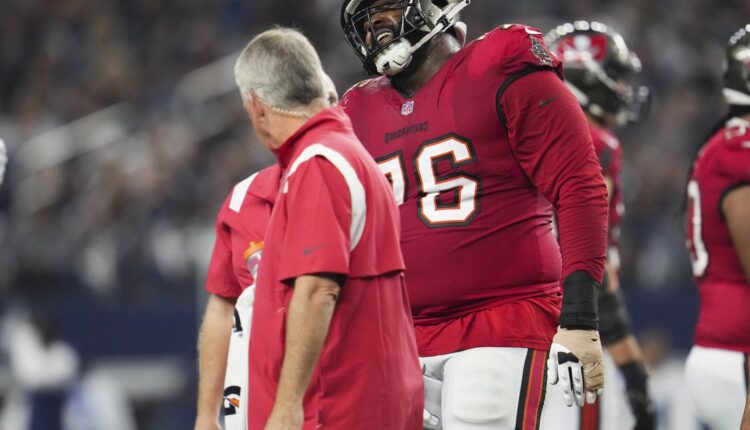 Tampa Bay Buccaneers wide receiver Mike Evans was suspended today for Week 3 action after his involvement in an on-field fight against the New Orleans Saints last Sunday. Beyond losing Evans, who is appealing his suspension, the Buccaneers could also be out receivers Julio Jones and Chris Godwin, who didn’t suit up against the Saints due to injury, in their Week 3 matchup with the Green Bay Packers.

Beyond just their receiver room, though, there’s another reason to check in on Tampa’s injury report throughout the week: their offensive line unit. This summer, the team lost starting center Ryan Jensen and potential starter Aaron Stinnie to knee injuries that have placed both linemen on the injured reserve. Left tackle Donovan Smith hyperextended his elbow in Week 1 and had to miss Week 2.

These cluster injuries may have actually influenced the Packers’ roster decisions already, as Tom Silverstein of the Milwaukee Journal Sentinel tweeted out last week that the promotion of tackle Caleb Jones from Green Bay’s practice squad to their 53-man roster could have been sparked from offensive line issues in Baltimore and Tampa. “They weren’t taking any chances,” said Silverstein. Jones is 1 of 11 offensive linemen that the Packers currently roster. Jones was inactive in Week 2 against the Chicago Bears.

Aside from the preferred starters that the Buccaneers have lost, replacement left tackle Josh Wells, in for Smith against the Saints, went down with a calf injury that forced Brandon Walton into action. By the end of the game, Tampa’s offensive line (left to right) was Walton, Luke Goedeke, Robert Hainsey, Shaq Mason and Tristan Wirfs.

While Mason and Wirfs are preferred starters, Wirfs has been dealing with “frustrating” ankle and oblique issues this season. Still, the biggest question marks on the offensive line are on the left side. Wells has only started 18 games over eight years in the NFL, including this past weekend. Wells’ replacement, Walton, has never started an NFL game since he joined the league as an undrafted rookie in 2020. Goedeke, a second-round rookie, is set to make the third start in his NFL career on Sunday. Hainsey, a 2022 third-round pick, didn’t start a single game in his rookie season and was only named a starter after Jensen’s injury this summer.

Quite the stat here. Top seven LB and DL in the NFL in % of pass-rush snaps resulting in a pressure among guys with at least 30 pass-rush snaps, per @TruMediaSports:

The wide receiver position might have the flashly names of Evans, Jones and Godwin to keep tabs on throughout the week, but Tampa’s offensive line, considering how many inexperienced and injured players the team has on their roster, could be just as important. Considering how well Rashan Gary, Kenny Clark and Preston Smith have played for the Packers so far this season, a bad matchup up front could be what ends up swinging the game in Green Bay’s favor. The pointsspread for this game originally opened with the Buccaneers being three-point favorites, but has already dropped down a half-point since Sunday night.