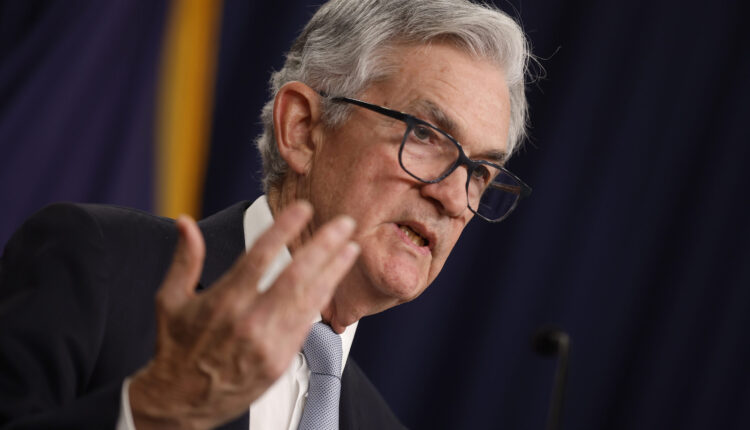 The Federal Reserve announced on Wednesday that in its continuing efforts to tamp down inflation, it would raise interest rates yet again by another three-quarters of a point to a target range of 3.75 to 4%.

Federal Reserve Chair Jerome Powell said during a press conference following the announcement that the “historically fast pace” of rate increases is “appropriate given the persistence and strength in inflation and low level at which we started.”

Powell, who has been pressured in recent months by members of Congress to avert a recession, said that at some point it will make sense to slow down the pace of increases but added, “We have some ways to go,” and said he anticipates ongoing increases.

Powell said he does not want to prematurely change the Fed’s approach because “ … the longer the current bout of high inflation continues, the greater the chance that expectations of higher inflation will become entrenched.

In its policy statement, the Federal Reserve said: “In determining the pace of future increases in the target range, the Committee will take into account the cumulative tightening of monetary policy, the lags with which monetary policy affects economic activity and inflation, and economic and financial developments.”

In September, when the Fed raised rates three times, a Bankrate analysis found it was the most increases by the Fed in one year since the 1980s. In the 1980s, Federal Reserve Chair Paul Volcker raised rates several times — ultimately to the highest they had ever been, which was close to 20%. There were two recessions as a result and inflation fell to 3.4% in 1987 from 9.8% in 1981.

In August, Powell said the Fed’s goal to eventually get to 2% core inflation is “unconditional.” On Wednesday, the Fed repeated its mission and said it is “strongly committed” to meeting its 2% inflation goal.

And while Powell has said the Fed’s aim is to bring down inflation without causing a recession, he has also said “No one knows whether this process will lead to a recession or, if so, how significant that recession would be,” PBS NewsHour reported. The acknowledgement that efforts to curb inflation could lead to job losses, has resulted in pushback from some economists and lawmakers who argue that a recession would be worse than today’s inflation.

Josh Bivens, director of research at the Economic Policy Institute, wrote in July that inflation does not directly decrease people’s incomes in the aggregate in the way that unemployment does and that in the long term, a recession would hurt economic growth more than inflation would.

Several Democratic senators have spoken out against raising rates, saying that it will put more Americans out of work, and would ultimately result in a painful recession. U.S. Sen. Elizabeth Warren tweeted on Wednesday morning, “Throwing millions out of work without addressing key drivers of higher prices isn’t the solution to fight inflation.”

Powell had previously heard from U.S. Sens. Sherrod Brown (D-Ohio) and John Hickenlooper (D-CO).  Brown, chair of the Senate Committee on Banking, Housing, and Urban Affairs, wrote to Powell on Oct. 25, “ … potential job losses brought about by monetary over-tightening will only worsen these matters for the working class.” While Hickenlooper wrote: “… I worry any additional action will undermine economic growth and harm American families.”

Democratic members of Congress introduced a bill in May that would focus on stopping price gouging during an “exceptional market shock.”

Republicans say they would cut government spending and “regain American energy independence” to bring down inflation, under the Commitment to America plan shared by House Minority Leader Kevin McCarthy.

Republican candidates for Congress have seized on the issue for the midterm elections. On Oct. 6, Madison Gesiotto Gilbert, who is running to represent Ohio’s 13th Congressional District, tweeted, “41-year high inflation” among her list of criticisms of Biden’s presidency. While Mark Robinson, the Republican running to take Democratic Rep. Dina Titus’ seat in Nevada’s 1st Congressional District, has blamed pandemic relief for inflation, according to the Financial Times. He said, “It’s reckless government policy that spent trillions of dollars we did not have and then paid people not to work: that’s what fueled the inflation. If they hadn’t done that, the Fed would not have to react.”

The CARES Act, the first pandemic relief measure with a $2.1 trillion price tag, was passed with bipartisan support in Congress during Donald Trump’s presidency. And economists have said that inflation in large part is now being driven by consumer spending.

In the past month, the Biden administration has taken action to try to alleviate the burden of inflation by providing cost-of-living adjustments to people receiving Social Security benefits as well as implementing IRS inflation adjustments.

Kenosha’s Saturday markets head inside for the season