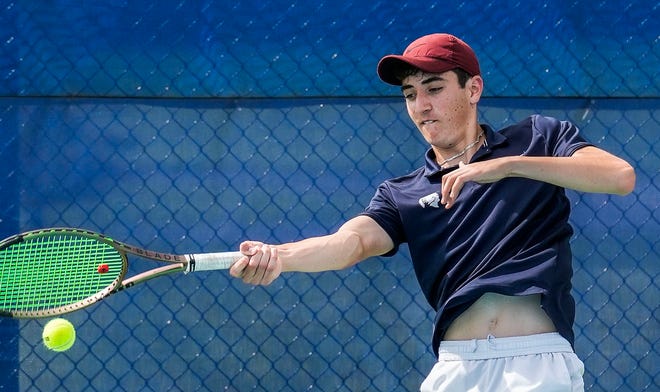 Schedule: Thursday – 10:30 am, first- and second-round matches. friday – 9 am, play through the quarterfinals. Saturday – 9 am semifinals followed by finals.

Surya Arvind, Brookfield Central: The sophomore, who is 21-6, pushed the area’s top two seeds, Oscar Corwin of Brookfield East and Marco Loro of Wauwatosa East, to tiebreakers before falling. He is seeded ninth.

Max Botey, Kenosha Tremper: The senior arrives at state with a 23-5 record and the no. 16 seeds.

Oscar Corwin, Brookfield East: The sophomore earned the No. 4 seed after winning the Greater Metro Conference title and posting a 25-3 record with the only in-state loss coming to Madison West’s Ethan Yu. He won two matches as a No. 16 seed last year before running into eventual champion Martin Blagoev.

Chatton Haws, Cedarburg: The North Shore champion, who is 26-1, had not dropped a set until falling to Wauwatosa East’s Marco Loro in a tiebreaker during the sectional. He won two matches at state last year as a no. 6 seeds.

Graham Kunick, Marquette: The junior took over the Hilltoppers’ No. 1 spot in mid-May and still managed to get the 15th seed.

Marco Loro, Wauwatosa East: The senior, an exchange student from Italy, is 23-3 with two losses by default due to injury. He scored postseason wins over two of the North Shore’s best players, Chatton Haws of Cedarburg and Tyler Schneider of Whitefish Bay, that helped him earn the No. 6 seeds.

Sam Quas, Milwaukee Lutheran/Lake Country Lutheran: The senior is 17-2 and seeded No. 11. His two losses came to Haws and Loro. His best win came in a tiebreaker over Schneider.

Tyler Schneider, Whitefish Bay: The sophomore is 18-10 and seeded No. 13 after a challenging schedule that featured matches against many of the players seeded at state. he was the no 15 seeds last year.

Henry Irwin and Reed Scullen, Brookfield East: The seniors, who are the defending state champions, spent a significant portion of the season playing singles but still own a 15-2 record with no losses to in-state opponents.

Alex Deubel and Ben Brandel, Arrowhead: The seniors, who are 18-2, finished sixth last season. Their only losses came to the tournament’s top seeds: Irwin and Scullen and Neenah seniors Nolan Kubiak and Khaled Saleh.

Michael Francken and Owen Kendler, Brookfield East: The seniors are the no. 10 seed, have a 25-2 record and the experience of a fifth-place finish last year.

Andrew LaBelle and Ryan LaBelle, Mukwonago: The seniors (26-3) are the No. 6 seeds. Two of their losses came to Deubel and Brandel, a team they could meet in the third round Friday.

Alex Gould and Lincoln Marshall, Marquette: This late-season pairing of Gould, a senior, and Marshall, a junior, has shown promise in their 10 matches together. Every win – the team is 9-1 with a loss to Irwin and Scullen – has come in straight sets.

Dayne Lindow, East Troy: The senior, who upset University School’s Max Watchmaker in the quarterfinals last season and went on to finish fourth, is 21-1 with the lone loss coming in a tiebreaker to Brookfield Academy’s Adrian Yin. He is seeded fourth.

Max Watchmaker, University School: The junior, who is 17-3, is the No. 1 seed. One of his most impressive showings was actually a loss, as he fell to No. 2 seeds Solomon Dunsirn of Neenah. He made it to the quarterfinals last year.

Teddy Wong, Dominican: The senior finished third last season. This year a postseason win over Yin helped get him the No. 2 seeds.

Adrian Yin, Brookfield Academy: The sophomore was the state runner-up last season. This year he is 13-4 with wins of note over Green Bay Notre Dame’s Alan Schneider, Watchmaker and Lindow plus a split with Wong.

Shaan Sharma and Joe Zimmerman, University School: The Wildcats seniors (14-4) are the No. 1 seed. Sharma was half of the state runner-up team last season. They have wins over Catholic Memorial’s team of Trent Adamson and Noah Carson and Brookfield Academy’s Pranev Gogineni and Vibhu Guda.

Pranev Gogineni and Vibhu Guda, Brookfield Academy: Gogineni, a senior, is pursuing a second straight title. Guda is a sophomore. The team is 16-6 and seeded No. 2.

Trent Adamson and Noah Carson, Catholic Memorial: Adamson is a junior; Carson is a sophomore. The two are the No. 4 seed and own a 10-11 record, though five of the losses came to Classic 8 rivals that played in Division 1.

Montana Hires a Medicaid Director With a Managed-Care Past