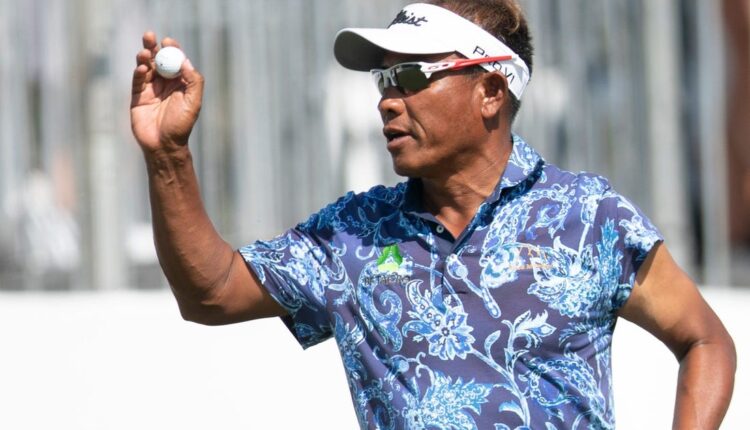 Thongchai Jaidee sank a slippery birdie putt at the 17th hole and went on to win the American Family Insurance Championship by one stroke on Sunday in Madison, Wis.

Jaidee, a veteran with 21 career wins across Europe and Asia, became the first player from Thailand to win on the PGA Tour Champions.

Jaidee’s crucial birdie followed a bogey on the previous hole and helped him card a final-round, 4-under-par 68 to finish at 14-under 202.

At No. 17, a par 3, he tapped a downhill, right-to-left putt that caught the outside lip of the cup and fell for birdie, giving him back sole possession of the lead. From there he saved at the last hole to secure the victory.

“I played solid, solid, solid (all) week,” Jaidee said. “I took one mistake on 16, hit the 3 and lost the ball, we make good bogey and try to get my plan. Made a good putt on 17 and the game changed. I think my (confidence with) the putting, that’s what helped me a lot for this week.”

Pernice’s bogey-free round set the clubhouse pace at 13 under before Jaidee’s final stretch.

Kelly, a Madison native, was both the two-time defending champion of his hometown event (2019, 2021) and coming off a victory last week on tour. He played a clean final round with five birdies and no bogeys.

“I’d like to start another streak next year,” Kelly said. “Yeah, these guys put on a fantastic tournament, don’t they? It’s pretty impressive it’s in our hometown. It’s fun.”