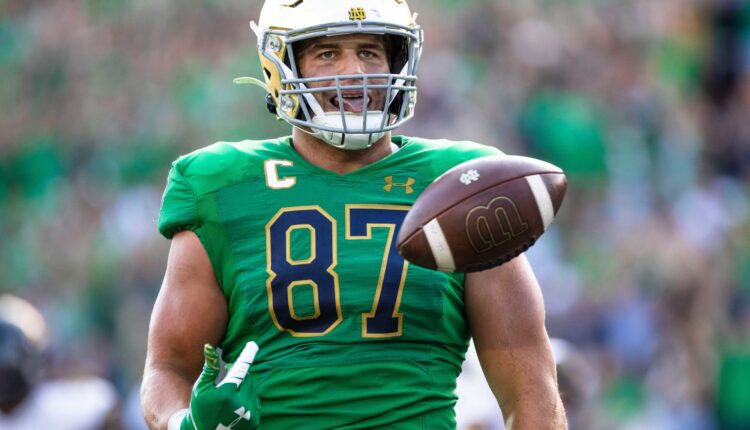 Another mock draft Monday, with more mocks showing up, have the Packers leaning towards tight end and safety in the first round.

Mock Draft Monday is in full swing after the divisional round, and with just four teams remaining in the NFL postseason, the mocks will continue to get more plentiful around the blogosphere.

As for the Green Bay Packers, they’ve been in draft season mode for a couple weeks now.

Part of that is taking a look at who the Packers could select in the first round of the 2023 NFL Draft.

Here, we’ll take a look every Monday at the mock drafts around the world of draft coverage, and offer some thoughts on every selection and how well it fits with Green Bay. Off we go!

Since officially declaring for the 2023 NFL Draft, Iowa’s Lukas Van Ness has been a popular pick in the first round. Parson brings this up as well, and talks about how Van Ness could improve a front seven in Green Bay that might not have Rashan Gary to start the season in 2023.

Relying on Kingsley Enagbare and Preston Smith didn’t doom the Packers, but getting more pass rush help should be on the list of needs this offseason. Van Ness has the size and frame that Green Bay likes in their edge rushers, and he packs plenty in terms of converting first-step explosion into devastating power at contact.

He gave both Paris Johnson and Peter Skoronski some trouble this season, and more development in rush moves could make him a dangerous player in the NFL.

There’s reason to question going edge rusher in the first round with other needs, but if the Packers believe he’s the best available, they’ll select him.

It’s been the most popular pick in mocks for the Packers over the past couple months, and it’s clear as to why. Green Bay has struggled to get tight ends going since Robert Tonyan’s impressive 2020 season, and they haven’t had a true stud at the position since Jermichael Finley.

Michael Mayer would bring the threat over the middle of the field back at tight end, for Aaron Rodgers, Jordan Love, or whoever else it could be.

Mayer is sufficiently athletic at the position, especially at 6-4 and 265 pounds (measurables not confirmed yet). He can line up inline, flexed out wide, or operate in the slot. His short area quicks and understanding of leverage as a receiver is impressive, and he wins at the catch point with toughness, body control, and extremely reliable hands.

Blocking improvement was needed from 2021 into 2022, and he answered that question. Mayer would be great roaming the middle of the field and could solve the red zone woes.

Another popular pick for the Packers, NFL.com’s Bucky Brooks sends Green Bay’s Brian Branch in his first mock of the draft process.

“Adding a high-IQ defensive back with position flexibility upgrades the athleticism and playmaking ability in the secondary,” writes Brooks.

With Adrian Amos and Rudy Ford set to be free agents, and questions about how long Darnell Savage will be around, safety is a big-time need for the Packers, especially if they want to continue to make Savage their nickel defender.

Brian Branch played mostly STAR and slot corner for the Crimson Tide in 2022, but thrived in that spot. His ability to read the quarterback’s eyes, infiltrate passing windows, and disrupt at the catch point would be a welcome addition. He’s a sure tackler in open space and can operate in man coverage or in spot drop zones.

The biggest question with this pick is whether or not Branch can indeed be versatile enough to play on the roof as well. If not, adding a player whose skill set mirrors where Savage fits best is a tough sell.

The last mock of this roundup is surprisingly another pass rusher. If this were to come true, it would give the Packers FOUR straight selections of Georgia defenders in the first round of the NFL Draft.

Smith has been a major part of the front seven at Georgia, accumulating 84 pressures in his four seasons with the Bulldogs. Despite his listed size of 6-3 and 235 pounds, Smith brings a lot to the table.

He is a premier pass-rushing talent in college football, with the first-step explosiveness, being, and flexibility to win around the arc and dip under contact at the top of his rush. Smith also packs some power in his lighter frame, holding the edge well against the run, and using the quickness and explosiveness he has to generate power to walk tackles back to the quarterback.

If Smith comes in at around 235-240 pounds at the combine, there’s reason to question if he’ll become a Packers pick. Green Bay has often liked their edge rushers to be a bit bigger to adequately defend the run and rush the passer.

Things aren’t always set in stone, though, so it’s impossible to rule this pick out. Smith is an impressive player.