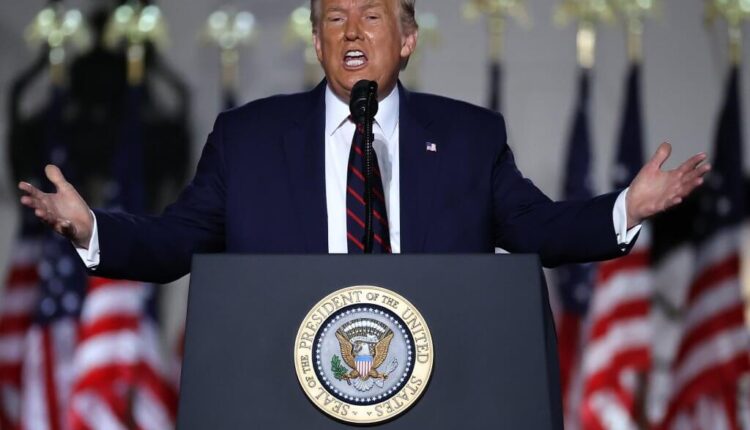 On Friday, the Supreme Court ruled that the Wisconsin Elections Commission acted illegally when it told local elections clerks that they can set up drop boxes as an alternative to the in-person return of absentee ballots. The court affirmed the January decision of a Waukesha County judge who said that absentee ballots must be returned through the mail or dropped off in person to the municipal clerk.

In a number of posts to his social media site, Truth Social, Trump falsely claimed the decision renders votes cast via drop box in 2020 invalid. The former president called the decision a victory for Republicans and ordered Republican leaders in the state Legislature, specifically naming Assembly Speaker Robin Vos (R-Rochester), to “do something, for once, about this atrocity!”

For nearly two years, Trump has been pushing baseless allegations that the 2020 election in Wisconsin and several other swing states were fraudulent. Following Trump’s demands, Wisconsin Republicans have continued to search for signs of misconduct.

Last summer, Vos appointed former Supreme Court Justice Michael Gableman as a special counsel to investigate the election. Gableman’s investigation has turned up zero evidence of fraud but spun out innuendo about drop boxes and voting in nursing homes, implying that the voting system is vulnerable to manipulation.

Earlier this year, Gableman suggested that the Legislature should “decertify” the 2020 election results, a legal maneuver that has been endorsed by right-wing members of the Wisconsin Republican Party but legal experts say is unconstitutional and impossible. Thus far, the Legislature’s Republican leadership has said it won’t act to decertify the results.

Gableman’s investigation has been going on for more than a year and cost taxpayers $1 million, far more than his initial budget. This spring, Vos suggested he would not renew Gableman’s contract, but relented under pressure from Trump. The review is currently “paused” as several lawsuits related to the former judge’s handling of open records and the constitutionality of subpoenas he delivered are pending in the court system.

In his posts on Saturday, Trump said Gableman is “highly respected” and touted his previous calls for decertification.

“Highly respected former Wisconsin Supreme Court Justice Michael Gableman, who has headed a major investigation into Voter Fraud, has strongly suggested that State Legislatures seek to decertify the Election results,” Trump wrote. “The victory for Republicans was, without doubt, substantial, as opposed to the very close result that was reported, with Biden eking it out. Other States are finding likewise, and some want to correct the situation. With corrupt Elections and Open Borders, we don’t have a Country…”

None of the allegations of fraud from Gableman, Trump or other Republicans have been proved. Numerous audits, recounts, lawsuits and investigations have affirmed that President Joe Biden won Wisconsin in 2020 by about 20,000 votes.

In hundreds of communities across the state voters used drop boxes to cast ballots for  both Biden and Trump in 2020. Many districts had also used drop boxes in prior elections. After Trump began pushing conspiracy theories about a stolen election, Republicans focused on the boxes as being vulnerable to fraud.

In his posts, Trump also quoted the majority opinion of Justice Rebecca Bradley, who compared the use of drop boxes in Wisconsin elections to elections run by dictators in Syria, North Korea, Iraq and Cuba.

Bradley has previously made historical comparisons in other opinions, including in 2020 when she wrote that stay-at-home orders to prevent the spread of COVID-19 were similar to the internment of Japanese Americans during World War II.

Following the release of the opinion last week, elections officials in Milwaukee criticized her comparison.

“An audit and recounts have proven that there is no doubt on the results of the 2020 election … nor do I think that our 2020 election was comparable to any authoritarian regimes that were referenced,” Milwaukee Election Commission Executive Director Claire Woodall-Vogg told the Milwaukee Journal Sentinel.