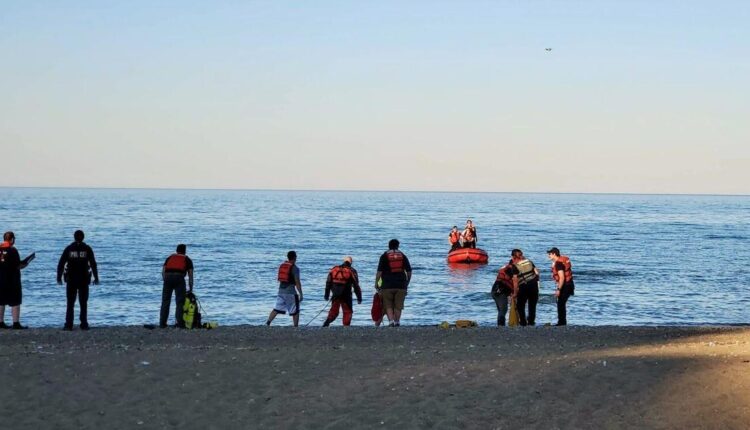 The 5-year-old boy pulled from the water at Pennoyer Beach on Tuesday evening has died.

Emergency responders from the Kenosha Police and Kenosha Fire departments were called to Pennoyer Beach east of the Pennoyer Park band shell for a report of an 8-year-old child struggling in the water shortly before 6 pm The girl was pulled to safety and was transported to an area hospital. This child survived.

While this rescue operation was taking place, a 5-year-old boy from the same group went missing, according to a media release from Kenosha Police. Fearing the child may have been playing near the Pike Creek River outlet to Lake Michigan, the search was immediately focused to that location.

The call was quickly upgraded with the United States Coast Guard being launched from its Kenosha station and Kenosha County dive teams being summoned.

A citizen drone operator also volunteered his personal drone which was put into action.

“After approximately 15 minutes of flight time, the 5-year-old was located about 50 feet from shore. The child was pulled from the water and taken to the hospital. Tragically, the child died,” according to the release.

The death investigation remains open and additional details of the investigation are not being shared at this time, including the identity of any person involved.

The waters in the area are known to have dangerous rip currents and large signage nearby warns swimmers of the hazards in both English and Spanish.

Mayor John Antaramian and County Executive Samantha Kerkman issued statements about the incident recognizing that many people in the area Tuesday may have witnessed it.

“I offer my sympathy and prayers to the family. This tragic death is a reminder of the ever-changing flow of the Pike River into Lake Michigan and the dangerous undercurrent of the lake. The city has applied for a grant from the National Fish and Wildlife Foundation as we continue to look for solutions,” Antaramian said.

He also encouraged families that “may need assistance in dealing with this tragedy” or need help broaching the topic with children to contact the Mental Health Resource Center at 262-764-8555.

“Seeing something like this is shocking and county resources are available to help people process what they witnessed,” she said.

Several people on the beach who had been at the band shell for the concert said they had left the performance to help with the search. An announcement had been made during the concert alerting the audience about the missing boy.

Fire and rescue, they said, had to respond to the water incident just moments earlier involving the young girl.

Elisa Rocha of Kenosha was among the concert-goers who went to the beach to help with the search.

“We were just listening to the music and one of the police officers made an announcement that there was a little 5-year-old boy … that was missing,” she said. Rocha said the officer included in the announcement that the boy was not wearing any swim trunks and for the audience to be on the lookout for him.

“So, we just picked up our stuff and helped them look,” she said.

Garrett Devoe of Kenosha said he was also at the band shell to attend the concert but decided to go for a walk on the beach before it started.

“We’d seen everybody waving their arms before the police arrived,” he said. “There was a couple here, a man with his daughter holding her and saying there was a boy missing.”

According to Devoe, the man said that they had found the boy’s shorts. He said the man and his daughter, who Devoe said was about 8 years of age, were crying. Rescue personnel then descended upon the beach and into the lake to search for him.

He said following the police announcement at the concert “everybody started searching” for the boy, Devoe added.

Exploring what the Milwaukee County Parks trail system has to offer | WUWM 89.7 FM