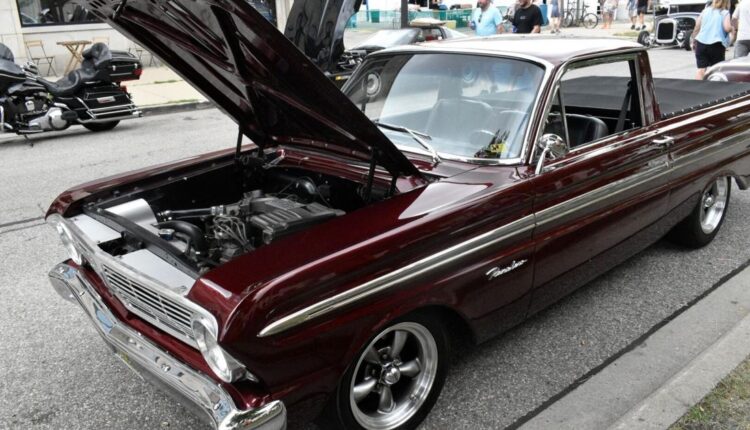 For John Hervat of Kenosha, cars have been a great part of his life since the minute he was born — he was born in a car on the way to the hospital.

Throughout his life, Hervat has owned and worked on many classic cars. At the 19th annual Kenosha Classic Cruise-In car show Saturday, Hervat brought his 1965 Ford Falcon Ranchero. It was featured among hundreds of other cars from local collectors.

“I’ve had a bunch of (car) projects. That’s what I did with my life,” Hervat said.

Hundreds of people gathered in downtown Kenosha to see the classic cars, vans and motorcycles Saturday. Streets were blocked off to allow visitors to stroll through the streets and admire the cars and talk with collectors.

Dave Fenstermaker, of Bristol, has worked on cars for 60 years and tries to make the Classic Cruise-In car show every year. This year, he brought his 1948 Ford pickup.

Nearby, Terry Gregorin sat with his bright blue 1936 Chevy two-door sedan, which he brought to the car show from Waukegan. Gregorin has attended the car show every year since he first heard about it.

‘Getting better and better’

“It’s just so well done,” Gregorin said. “The spectators are fantastic and always under control and it’s just getting better and better every year so we always enjoy ourselves and shop around, have a couple of beers.”

The car show attracted many collectors from the south of the state line. Roy Crossley, of Libertyville, Illinois, brought a 1973 Model Series 3 Land Rover. The military land rover was used by the British Army, he said.

While originally created for military purposes, today, classic land rovers like Crossley’s are often used for things like safaris. The vehicle features a safari roof that channels air into the cabin, Crossley explained.

When Crossley is in Wisconsin, he takes advantage of the gas stations, which he said works better for his 1973 Land Rover than the gas in Illinois, and is cheaper to buy.

“This (car) has a 12 gallon tank, come standard on it,” Crossley said. “And since it was a military vehicle, there’s another 12 gallon tank underneath. You’d have to take a seat out to fill it.”

The land rover is one of Crossley’s newer cars; he bought it in 2019.

“They redid it up here in Wisconsin and I bought it off whoever did that through a dealer,” Crossley said.

Other car collectors, such as Ron Schottler, opted to bring cars they have owned for decades. He bought his 1967 Ford Big Block Mustang 35 years ago, and since then it has been featured in Milwaukee Magazine and multiple news stations, featured as a Snap-On calendar car and used for a lot of charity events, Schottler said.

A charity event Schottler used his car for was a raffle for a ride in the mustang for the American Cancer Society. He was able to give a ride to cancer patient before the patient died, fulfilling the man’s strong desire to ride in one of the cars.

Schottler passed down a love for cars to his family; both his son and grandsons enjoy fixing classic cars.

“The grandson was just here for two weeks and he helped me work on them,” he said.

Families of classic car collectors were not uncommon at the Cruise-In. Joe and Sean Mulroney, a father and son from Waukegan, drove to the car show to feature their 1972 Chevy Malibu.

“We try to make this (car show) every year because it’s a large on,” Joe Mulroney said.

Within one of the rows of vans featured at the show were Pat Ennis and Vicki Dower, there with their husbands’ reworked vans. Ennis and Dower both “married into” van life, they said.

“(My husband) has always been into the antique vans like this,” Ennis said. “It was something I never knew about until I met him.”

The two women and their families are members of a van club with chapters across the country. They frequently attend van shows and other events like the Classic Cruise-In.

“My husband and I have been coming down here to this car show for six years,” Dower said. “We’re trying to get the younger generation involved with vanning.”

Most vans at the show were reworked on the inside to include beds and comfortable chairs for long trips and camping. Kris Nichols, of Waukegan, brought her 2015 GMC Savannah 2500, which was missing a row of seats so there was more space to fit a bed.

“We’ve been traveling in it so we take one row out. My fiancé is 6-foot-6-inches, so we have to put one seat all the way to the front,” Nichols said. Nichols and her fiancé bring the van both to van shows and camping about twice a month, she said.

With hundreds of cars, vans and motorcycles of dozens of different makes and models, each vehicle featured something different from the last. Regardless of differences, however, the Classic Cruise-In allowed a day of memories and camaraderie for Kenosha-area residents with a shared love for cars.

“They make people smile,” Schottler said of the cars.

Can I still rent DVDs from Netflix? | WFRV Local 5