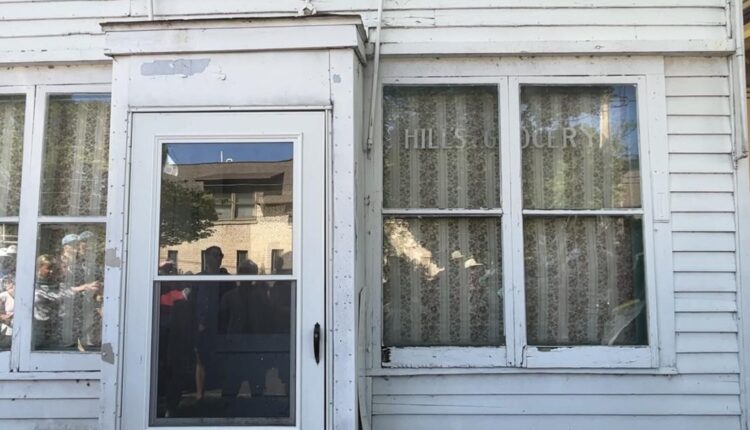 Participants in a walking tour focused on Madison’s Black history visited four distinct landmarks Saturday morning, ending their trek next to a larger-than-life-size cutout of Vel Phillips, the first woman and African American elected secretary of state in Wisconsin.

This is the second year of the Wisconsin Historical Society’s Madison Black History Walking Tour. The organization is making the tour a monthly offering with the Boys & Girls Club of Dane County, expanding local access to Black history.

The Boys & Girls Club is also raising money for the construction of a statue of Phillips at the Capitol.

“There’s a lot of rich history in this city among African Americans,” Boys & Girls Club president and CEO Michael Johnson said. “It’s important for all kids to know. White kids, Black kids, Latino kids, women, should understand and see the fabric that makes up the people in our city, in our country and in our state.”

Tanika Apaloo, multicultural outreach coordinator at the historical society, said the society is making the tour a monthly offering for the summer season.

“There’s a huge interest in this history,” said Apaloo, who is African American. “We’re happy to be the ones to be able to present it. “I never learned anything about the local history of African Americans in the state of Wisconsin growing up.”

The tour began at Hill Grocery Store, the first Black-owned business in Madison. John and Amanda Hill, along with their three children, operated the business for nearly 70 years after it opened in 1915.

The store was the longest single family owned business in the city. The Hills’ daughter, Freddie May Hill, was the first Black woman to graduate from UW-Madison.

Sarah Dawson, of Madison, said she enjoyed learning more about Black history in the area.

“It’s so important to make sure that contributions from marginalized communities are maintained and talked about,” Dawson said. “Those histories get lost and aren’t seen as important. The more we can bring those to the forefront, the better.”

Johnson said a statue of Phillips is an important way to bring Black history to the forefront of Wisconsin history. Once Phillips’ statue is erected, Johnson said, it will be the nation’s first statue of a Black woman at a state capitol.

Most people, he added, haven’t heard of Phillips or her achievements, including being the first African American and the first woman elected to the Milwaukee Common Council. Schools, for the most part, do not teach about Phillips’ work as a civil rights leader or fair housing advocate, he said.


Tour attendees also visited the home of Benjamin Butts at 633 E. Johnson St. Butts was born enslaved in Virginia in 1853. He opened a barbershop in Madison in 1872, servicing Madison’s political elite, and later worked for the Wisconsin Historical Society. His son, Leo Butts, became the first black football player at UW-Madison.

Butts, his wife and their eight children were 10 of 41 African Americans living in Madison in 1892. Dawson said she had never learned about the size of the Black community in Madison and was shocked to hear it was so small.

“To have such a small number of Black people but for them to have such a large impact on the community and the future of Madison, that’s really impressive,” she said.

The bank is one of the few buildings from the 1800s still standing in the region. One of Thomas Jefferson and Sally Hemming’s grandchildren ran a hotel once located there, known as American House, American Hotel and Capital Hotel, among other names, Diel said.


Easton Hemmings-Jefferson hosted Wisconsin legislators and other recognizable figures at the property. Once Hemmings-Jefferson died, his two sons, who later served in the Civil War, bought the hotel and opened a transit line in the city. They were considered prominent businessmen, though the descendants of the former president and Hemmings, a black woman enslaved by Jefferson, were not officially recognized as Jefferson’s descendants until the 1998.

“When we teach local history about people that look like us and who we can identify with, it can be very empowering,” Apaloo said. “It can help us identify successful people in the past and envision or mirror those things.”

Learning from the past

Apaloo said she wanted to give tour attendees a window into the relationships the Black community built in Madison, in addition to introducing them to trailblazing figures.

She showed participants the Miller House, owned by William and Anna Mae Miller, a couple involved in improving social conditions in Madison. The couple offered their home at 647 E. Dayton St. as a rooming house for African American families migrating from the South.

A mock-up of a statue of Vel Phillips to be constructed at the state Capitol concluded Saturday’s Madison Black History Walking Tour. Phillips was the first woman and African American elected secretary of state in Wisconsin.


Sharing stories like the Millers’ is why it’s important to regularly offer the tour, Apaloo said, adding that people who live here should have an understanding of the people, communities and camaraderie that came before them.

“If our ancestors can overcome obstacles, we can find a way to do it in these times,” she said. “Teaching that history and being able to learn from the past is an extremely important reason why I carry on those legacies and histories today.”