What Does A Successful Second Season Look Like For Joe Barry? 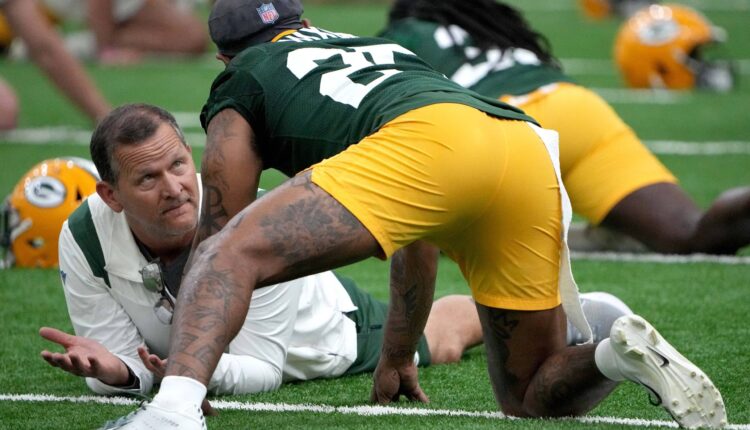 Believe it or not, after just one season with the team, Joe Barry is the longest-tenured coordinator with the Green Bay Packers.

Following Nathaniel Hackett’s departure and Green Bay firing Maurice Drayton, Barry is the only returning coordinator in 2022. His first season with the team had its ups and downs. He brought an exciting new energy to a stagnant defense and revitalized the linebacker position and corner depth. However, the run defense and end-of-half defense remained a problem.

But Barry was installing a new defense in Year 1, and his two best players (Jaire Alexander and Za’Darius Smith) missed most of the season. The defense ended on a strong note, dominating the San Francisco 49ers’ offense in the Divisional round. Despite the eventual loss, that performance was a sign of what could be.

Despite having a worse defense by DVOA than the last two years of Mike Pettine’s tenure, Barry’s first year was promising, all things considered. The Packers have filled their offense with unproven playmakers, so they will need to rely heavily on their defense this year. What does a successful Year 2 for Barry’s system look like?

Obviously, the dream scenario would be having the No. 1 defensive in the league and winning a Super Bowl with it. But just in case that doesn’t happen, Barry needs to build on the success he found late last season and successfully integrate his new players into the system.

Thanks to his high-energy and optimistic style, Barry won over the locker room — and many fans — after his hiring. But his previous stints as DC weren’t promising. Barry led some of the league’s worst defenses in Detroit and Washington. Even his first year with Green Bay was statistically worse than his predecessor’s. You can make an argument about the lack of talent in previous stints, but Barry has yet to lead a defense in the top half of the league.

That’s all great, but as a DC, here are Barry’s overall defensive DVOA ranks:

I understand all the qualifiers about the (lack of) talent on DET and WAS and about Jaire’s injury etc. etc.

That said, Barry has learned a lot since his time in Washington and appears all the better for it. He lost his two best players in his first year in Green Bay, but Barry made the most of what he had. He is particularly gifted with coaching inside linebackers and helped De’Vondre Campbell break out from a street free-agent signing to a first-team All-Pro. Meanwhile, Barry helped turn Rasul Douglas from a practice-squad depth player to a legitimate CB2. Eric Stokes had a promising rookie season when Green Bay called him up. Rashan Gary broke out in Year 3 while Preston Smith had a bounce-back year after a lackluster 2021.

Barry is getting phenomenal individual performances from his playmakers, who are responding well to his coaching and energy. Campbell said he chose Green Bay because Barry allowed him to move away from the Mike role he’d played in Atlanta, and Campbell responded by balling out. Barry is providing autonomy by letting his players do what they’re good at and building trust with his team.

Now he will need to turn those individual performances into group success and make sure these players continue ascending. It was fair to wonder if Campbell and Douglas could repeat after only one year of proven success. Still, Barry and the Packers believe they’ve found true core players, and he and his coaching staff need to keep up the momentum.

Another offseason with the team means Barry is able to get the players he needs to build his ideal defense. The Packers’ two first-round selections, Georgia’s Quay Walker and Devonte Wyatt, are Barry picks through and through. Barry has consistently done well with inside linebackers, and Walker is an athletic monster who should be a perfect fit scheme. He’s a bit raw, but he has the skillset to be a major contributor early, and he has the opportunity to learn from Campbell. If Walker can get acclimated quickly, inside linebacker becomes a strength, a rarity in Green Bay in the last 20 years.

Meanwhile, Wyatt allows Barry’s weakness to shore up one of the team’s biggestes, run defense, with a lineman who better fits the scheme. A shorter, penetrating lineman is something the Packers didn’t have in 2021, and that provides the newly bolstered line some versatility.

It’s a lot to expect rookies to make an impact right away, but Green Bay clearly drafted these two to contribute as soon as possible, and Walker and Wyatt have the benefit of having experienced veterans to learn from. Getting these rookies acclimated and playing roles on the defense will be a major factor in getting the defense to the next level.

Barry has all the tools he needs to produce a top-tier defense. Green Bay has been investing significant resources into the defense for years, and it finally seems like the individual talent is there. When Matt LaFleur hired Barry, he kept most of Pettine’s staff intact, with the implication being just a change in scheme and leadership was all that side of the ball needed to improve.

It’s up to Barry to get the defense to where it should be. The unit has enough talent to be a top-10 squad and just drafted two enticing first-rounders. If Barry builds on the end of the last season, gets consistent performances from the defense on the whole, and can quickly get his rookies involved, Year 2 will be a successful season.