What I learned from my mom 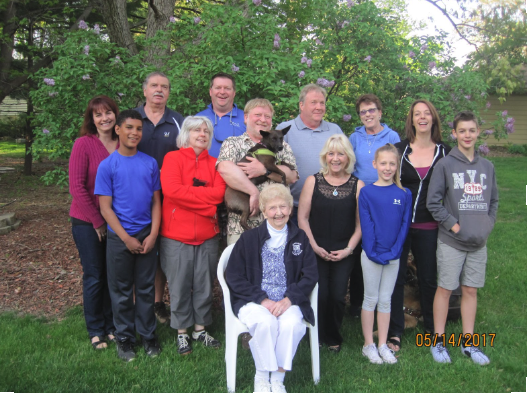 In January 1995 my mother, Elaine Benz, sent me a newspaper clipping of a letter she had written to the editor of the Milwaukee Journal. She was 70 at the time. I’m pretty sure it was the only one she ever wrote. It was a response to another letter writer who had opined that anyone foolish enough to work for the minimum wage must be “one big sucker.” My mom’s letter read, in its entirety:

“The letter written by James Arndt made my blood boil. He has no idea what the world is like when one is disabled or blind. To say ‘you are one big sucker’ if you are working for minimum wages shows Arndt doesn’t know what he is talking about. Elaine Benz, Waukesha.”

Elaine died on Dec. 29, before the sun came up. She was 98, just a few weeks shy of 99. My sister, Diane, and I were able to spend much of her last two days at her side. There is no need for condolence; my mom led a full and mostly happy life, and had a peaceful death. But I do want to share a few thoughts about her, because I think that many of us who end up as journalists and advocates and assorted other kinds of would-be do-gooders have had someone like her in our lives.

My mother, an only child, grew up in Milwaukee during the Great Depression and never finished high school; her father pulled her from school for a family road trip when she was 16, and she never went back. She was not political. She didn’t wear buttons or go to campaign events. But she always voted—I assume she voted mostly for Democrats, though I honestly don’t know—and for many years she was a poll worker at her neighborhood polling place. She read the newspaper every day. Being reasonably informed was a civic obligation.

It was my mother, unquestionably, from whom I got my politics, though we never talked about politics at all. It was my mom’s example of kindness, her commitment to fairness, her focus on family, her constant concern, that informed my world. I never heard my mom say an unkind word about anyone. I never even heard her swear—except the one time when she referred to some music I was listening to as “crap.” That was literally the only time. And she had a point.

I read my mom’s letter to the editor at her memorial service on Jan.6. I didn’t have to explain to the people there why she was so offended by someone saying only a “sucker” would work for the minimum wage. She herself had worked for low wages all of her life: at her father’s potato chip business when she was young; at the franchise ice cream shop she and my dad tried for a year to make a living at; as a clerk at a local convenience store called Winkie’s; and then for more than two decades as a clerk at Woolworth’s.

My dad, Lorenz, who went by Lorry, worked for low wages, too, as a delivery driver for a laundry and dry cleaning company. (Fun fact: My father worked for “Ollie” Adelman, the father of Lynn Adelman, now a federal judge for the Eastern District of Wisconsin.) He started his workdays at 5 a.m., and for decades he held a second job cleaning offices at night. He died in 1985 at age 62.

Several years later, my mom remarried, to another war veteran: Don Benz, whose wife had passed away. Don and my mom had known each other since they were toddlers. They had 25 happy years together, until his death in 2014. 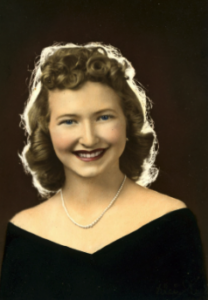 As I said at her service, my mother had two marriages but only one family. Both of her husbands were lucky to have her in their lives. Elaine was a good mom. She was there for us. She let us know that we mattered. She worried about us. She was proud of us, as we were proud of her. She lived for the times when the family would all get together. I think she knew that this was her gift to the world, the family that had sprung into being around her.

My brother Rick, who is blind, has worked all of his life for low wages—often lower than minimum, which the law allows for people who are deemed not fully abled. He works to this day, at age 68, running lathes and milling machines at a nonprofit workshop for the blind in Milwaukee. Our other brother, Jim, was killed at age 19 when a bus drove over an expressway median and crashed into his car.

My sister Diane has always liked to help others. Now in her mid-70s, she bakes cookies for people who are, as they say, experiencing homelessness. She sews colorful, unique tote bags that attach to walkers and wheelchairs—365 per year for the past six years and 366 in leap years. Each takes about an hour to make. She gives them away for free to nursing homes and other senior care facilities.

That’s one of the reasons it is so heartbreaking and tragic that, toward the end of her life, my mother was treated with great disregard by the industry that makes money off of the elderly, and by the government officials whose job it is to protect them.

As I detailed in more than a dozen articles for the Wisconsin Examiner and other publications and summed up in a report last August for The Bulwark, my mom was evicted in October 2021 from the senior care facility where she had lived for more than ten years, including several with Don. The Regency of New Berlin, owned by a Waukesha-based “not for profit” called ProHealth Care that makes more than $100 million in revenue less expenses per year, had decided that she had become too much work.

As often happens in cases of improper discharge of the elderly, recognized by the U.S. Department of Health and Human Services as a serious and growing problem, Elaine was sent outside of the facility for treatment and not allowed to come back. The Regency claimed without evidence that it was an emergency, that she had become a danger to herself or others.

I filed a complaint with the state Department of Health Services, which regulates licensed care facilities in Wisconsin. It investigated and found that the Regency had violated state administrative code in two particulars, specifically including its false claim that there was an emergency that absolved it from having to give an otherwise required 30 days notice. It issued citations and a $1,500 fine. Then, when the Regency appealed, the state obligingly backed down and rescinded the fine. It even replaced a document on its website that flagged the two deficiencies with one bearing the same date that falsely claims “No deficiencies were identified.”

The state claimed that some new information, which it has never been able to identify, caused it to conclude that the original citations had been issued in error. We pressed for an explanation for months, but none was forthcoming. Bryan Polcyn, a reporter at  Fox6 News in Milwaukee who produced an eight-minute investigative report on Elaine’s eviction that aired in October, was also unable to get the state to offer a cogent explanation. (Think local television news does not do impressive, hard-hitting, in-depth reporting? You are eight minutes away from being proven wrong.)

My mom never knew about these articles or the TV report in which she appears. It would have been too much for her to comprehend. I wish the attention we generated had been enough to move the needle in terms of how vulnerable people are treated. I don’t think it did.

The Regency and ProHealth Care never paid any price, beyond some bad publicity, for kicking out my mother one day to the next. The state never proved that it was right to rescind the citations it had issued. None of the specific suggestions I made to the state on how to improve the process were pursued, so far as I know. My family and I did our best to make it less likely that something like this would happen to others. I don’t think we succeeded.

After my mom passed, I sent an email linking to her obituary, which mentioned her eviction, to friends and some of the state officials involved in her case. One of the many state workers who initially found fault with the Regency’s actions and later remained silent when that finding was overruled wrote back to say, “Sorry for your loss. You have my sympathy!” I thanked this person in reply, but added:

I would rather that you had been able to stand up for us, for my mother, and for yourself, when it mattered. When the state swooped in and said that you got it all wrong, you screwed it all up, I wish you would have said what we all know to be true: That the folks at the Regency broke the law and you did the right thing in flagging them for it, and that the state was wrong to capitulate. That would have been more meaningful than to have your sympathy

That’s a big ask, I know. Frontline workers should not have to demonstrate more courage and integrity than the systems for which they work. But that may be what it will take to bring about real change. In the end, it comes down to individual action, to the choices we all make each and every day.

Anyone who takes an honest look at our current political predicament must be taken aback by the depth of the dysfunction and the immensity of the challenge. But it is not hopeless as long as we can find reasons for hope. We all have a role to play in that process, whether it consists of exposing injustices, sewing tote bags for older people, or handing out ballots at the neighborhood polling place.

My mom was not political but she embodied the essence of good politics: Be kind. Be decent. Try to make the world a better place. You just might succeed, as she did.

This article was originally published in The Bulwark and has been made available to other publications that ran stories regarding Elaine’s eviction.