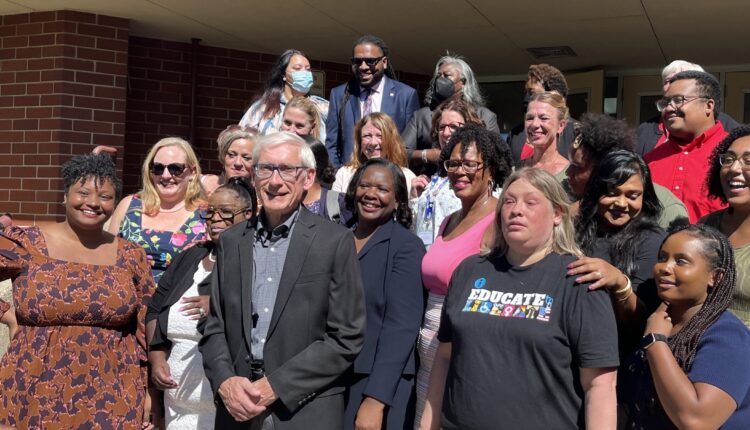 The funds, which come out of the state’s allocation from the federal American Rescue Plan Act (ARPA), will double Wisconsin’s investment in Evers’ “Get Kids Ahead Initiative,” adding $15 million for mental health support for students. The remaining $75 million will go toward addressing school staffing shortages. In total, the effort “will help provide what kids need to be successful,” Evers said.

The superintendent of Madison public schools, Carlton Jenkins, called the announcement “a big step in the right direction.”

But instead the state could be taking a giant leap.

Wisconsin is in the best fiscal shape it’s been in history. There is plenty of money to fund public priorities, including public schools.

An Aug. 24 memo from the Legislative Fiscal Bureau lays out Wisconsin’s increasingly rosy financial picture: Revenue from tax collections is 8.6% above the bureau’s January estimate — which already projected a whopping $3.81 billion budget surplus. It turns out we have $1.62 billion in extra money on top of that already stunning windfall. Add to that the $1.73 billion that is already sitting in the state’s “rainy day” fund and it brings the total amount of our unexpected surplus funds to more than $7 billion.

That number dwarfs the $1.7 billion increase for schools over two years that Evers asked for in his last budget proposal, which the Legislature rejected, instead pushing through a plan that froze spending on schools. The total surplus is seven times more than the $1 billion in special education funding local school districts are scrambling to come up with by jettisoning art and music programs, since special ed is a 100% federally mandated program but the state only reimburses 28% of the cost (down from 70% several decades ago).

It’s even significantly more than the $3.9 billion in cumulative cuts in state aid to public schools Wisconsin has made over the last decade.

Meanwhile, the $90 million Evers announced on Tuesday is a one-time gift from the federal government — not a long-term commitment.

Schools across Wisconsin are facing significant challenges meeting students’ needs as they start the new year.

The pandemic disrupted lives and greatly ratcheted up the need for mental health services. At the same time, there’s been a surge in teacher turnover. A recent Wisconsin Policy Forum report showed public sector workers, including teachers and school staff, left Wisconsin’s workforce in 2021 at the highest rate in two decades. And then there’s the fiscal cliff schools face when the one-time federal funds run out.

The Republican-controlled Legislature refused to make new money available to schools in the current state budget. Instead, they approved a historic 0% increase in education spending. When the federal government put them on notice that the state could lose billions in aid if it failed to maintain state funding for schools, the Republicans grudgingly put $706 million into education — but then refused to raise spending caps on local school districts, so the money can only be used for cutting local property taxes, not for education.

So this year, school districts are begging homeowners to tax themselves more to come up with money to cover building maintenance and basic operating expenses, even though Wisconsin’ state coffers are overflowing with tax revenue. At least 50 Wisconsin school districts are going to referendum in the fall, asking voters to approve tax hikes on the November ballot and seeking $1.9 billion from local communities — a record amount.

As public school advocate Heather DuBois Bourenane of the Wisconsin Public Education Network puts it, “the state froze spending for two years, at a time when kids have never needed it more.” And that comes after more than a decade of disinvestment in Wisconsin’s historically great public schools, leading to cuts in classrooms all over the state.

Spending on schools has not kept pace with inflation since former Republican Gov. Scott Walker slashed state support for education and began the current trend of making bigger and bigger tax cuts every year.

Shortly after Evers’ announcement of the $90 million for schools, the campaign of Tim Michels, his Republican opponent, put out a statement accusing Evers of “tapping into his taxpayer-subsidized re-election slush fund so he can pretend to care about education.”

But what bugs them the most is that there’s no excuse for their austerity measures, other than pure mean-spiritedness.

People who want to get government down to the size where they can drown it in the bathtub don’t like the fact that we can afford great schools for all kids. They want a pay-as-you-go society where if you can afford private services including private schools, you’re in luck, and if not, too bad.

Since there’s no economic rationale for draconian budget cuts, Republicans fall back on anti-government rhetoric, as if they were liberating elementary school students from the iron grip of communism by defunding their schools.

On his campaign website, Michels promises to “transfer power to parents from [Evers] and the public school establishment” and expand private school choice.

“We’re already throwing so much money at education,” Michels said during a primary debate. He called putting more money into public schools “the definition of insanity.”

“They made a calculation that they can try to win this election and blame the governor for their own failures and then shovel that money into massive corporate tax breaks,” she added.

Meanwhile, Wisconsin’s per-pupil spending on elementary and secondary school students has sunk below the national average, according to a report released last month by the Wisconsin Policy Forum. Wisconsin ranked No. 25 among the 50 states in 2020, a steep drop from its  No. 11 ranking in 2002. And, the report states, “The caps on school revenues in the 2021-23 state budget may drive additional drops in Wisconsin’s ranking in upcoming years.”

Less spending on education means lower taxes, since K-12 schools are the single biggest budget item paid for by state and local taxpayers. But less spending also means lower quality schools. The high rate of success for school referendum efforts seems to show that taxpayers are not comfortable with that trade-off.

Still, even Evers has been careful to endorse tax cuts before proposing more spending on schools. Asked about the additional revenue surplus the Legislative Fiscal Bureau is reporting, he called it a “huge issue” that should definitely affect the next round of education budget talks. But “first of all,” he said, “I have a plan out there to use some of those funds to reduce the tax burden on middle class taxpayers.”

A lot of those middle class taxpayers will be voting in November to fund their local public schools by raising taxes on themselves.

But Wisconsin has enough money to restore funding for public schools after a decade of neglect without raising taxes at all. It has enough money to implement every one of the recommendations of the bipartisan Blue Ribbon Commission on School Funding without using up the surplus. “It’s a generational opportunity,” says Chris Thiel, legislative policy analyst for the Milwaukee Public Schools. “The funding that’s available moves the Blue Ribbon Commission report from rhetoric to reality. We have the opportunity to do the things we know would work for kids.”

DuBois Bourenane, who welcomed Evers’ announcement of the $90 million in federal funds for schools, says she is still “really worried” about the future. “What we really need are leaders who are going to invest in a state budget that allows kids to thrive without happy miracles,” she says.

“We’re a decade behind our lowest point,” she adds. “To play games while we’re sitting on this shamefully large surplus is unacceptable.”

The idea that Wisconsin can’t afford to do right by kids is a lie.