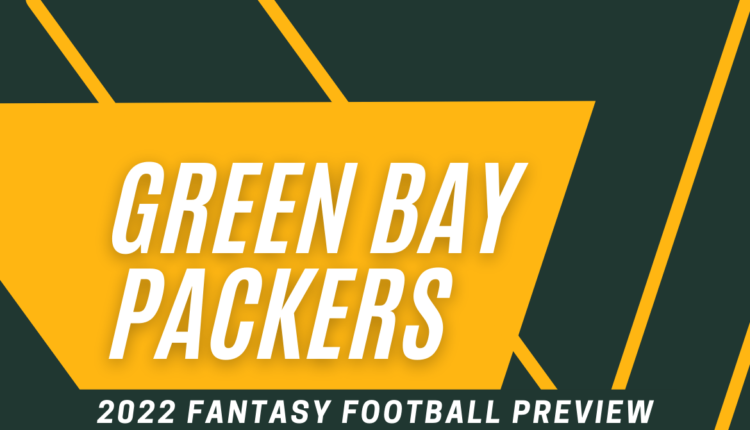 The amount of drama surrounding the Packers each year is insane. Every year the saga of Rodgers and the Packers front office continues and adds a new layer. This year was no different.

After rumors of possible retirement and leaving the NFL to be the host of Jeopardy, Aaron Rodgers signed a massive contract keeping him in Green Bay for the next few years. However, his top wideout Davante Adams is not returning. In a stunning blockbuster trade, Adams was traded to the Las Vegas Raiders to pair up with his college QB: Derek Carr.

Somewhat predictably, yet still surprisingly, Green Bay did not take a WR in the first round of the 2022 NFL draft to replace Adams. Most of the first-round WR talent was gone by the time they were on the clock anyway. Instead, they traded up to select Christian Watson of NDSU at pick 34. Green Bay also added journeyman WR Sammy Watkins in free agency.

It’s a year of uncertainty for the Green Bay wide receiving group, but we know somebody will be valuable in fantasy. It’s a matter of who. But, there are also things that should be consistent from last year.

Complete a free five-minute mock draft against industry experts and custom analysis for your team with the FantasyPros Draft Wizard.

Rodgers has finished as top-10 QB in each of the past 4 seasons. Davante Adams is gone, but I have no doubt Rodgers is going to make it work. Courtesy of Statmuse, since 2019 Rodgers has played seven games without Adams. In those games, he has a combined 19-1 TD/Int ratio and won all of them.

That is not to say Green Bay is better without one of the best receivers in the game, merely that Rodgers is an incredible QB. This is why I feel that Rodgers will finish as a QB1 once more. His supporting cast has talent and potential, he’s an all-time great and can make things work regardless of the situation.

Don’t draft Jordan Love. That may go without saying, but just in case. The former first-rounder has to wait even longer to get his chance to show his stuff for more than a game here or there.

Jones and Dillon are going to be a powerful one-two punch this year. Last season both running backs finished in the top 24 in PPR, with Jones sneaking into the RB1’s and Dillon likewise with RB2s.

Jones is a running back who relies on efficiency rather than volume, similar to Alvin Kamara. He doesn’t need volume to be a great fantasy asset. And in a backfield where he’s sharing the workload with a player like AJ Dillon, that’s a good thing.

One thing to watch this season with the Green Bay RBs and Jones specifically is the number of targets that could be coming their way. A study done by The Fantasy Footballers Kyle Borgogoni showed that among teams with the most vacated targets, running backs stand to benefit more than WRs. Jones had 65 targets last season; imagine if that number grew closer to the 90+ target range like a Najee Harris had last year!

And let’s not forget about AJ Dillon, aka Quadzilla, Quadfather, all the quad jokes. He had over 200 touches last year as well, and can benefit from some possible extra passing volume.

One caution with Dillon is that he was RB36 in PPG, he finished as an RB2 on the back of playing every game in 2021. However, he has the workload and the upside to finish inside the top-24 running backs once again.

Allen Lazard is the top returning WR in Green Bay this season. To be quite honest, I’m super high on him. With so many vacated targets, even with the Packers’ new additions and the RBs likely getting a target boost, Lazard should still thrive.

Chemistry matters with a guy like Rodgers throwing the ball. He’s been there longer than Sammy Watkins, Amari Rodgers, and Christian Watson. That already gives him a leg up on those guys. Though he got off to a slow start in 2021, in weeks 14-18 he was the overall WR8 in PPR. That’s not all.

He has Rodgers’s trust in the red zone. Lazard hauled in eight-of-sixteen RZ targets for seven touchdowns last year. He’s been a trusted target when it matters most.

Smaller sample size sure, but did you know Lazard has a better YPT and YPR in the Redzone than Davante Adams over the last two years? That might be more of a fun fact than actionable but it’s still cool, right? Either way, I think Lazard is in for a big year.

To me, Christian Watson has the best chance to overtake Lazard for the number one WR spot. However, I think he’ll end up as the wide receiver two for the time being. As part of a run-heavy scheme at NDSU, he comes into the NFL with only 105 career college receptions. He was used in the running game some in college, with 49 career carried at NDSU. Maybe that will give HC Matt LaFleur a creative spark for Watson’s usage.

His receiving production profile is somewhat lacking, but he’s tall, versatile, and athletic. And to their credit, Green Bay is pretty good at selecting WRs in the early rounds. In time he could be a great fantasy asset, I just don’t know if it’ll be right off the bat. Preseason reports will help tell the tale.

I’m not interested in Watkins outside of best ball formats. He’s totaled more than 40 receptions once in the past six seasons and is very boom/bust. Randall Cobb is a floor option that you can use for bye week fill-ins.

After doing next to nothing in his rookie year, I’m leaving Amari Rodgers on the waiver wire.

A year after finishing as the TE3, Robert Tonyan predictably came crashing back down to earth. After scoring a TD every 5.4 targets in 2020, that number fell to 14.5 targets per TD in 2021 before tearing his ACL in week 8. To make matters worse, Tonyan also scored over 8 PPR points only twice.

But I believe this season can be a bounce-back year for the tight end. While his touchdowns were down, his targets per game and YPR were the same. He even saw a higher ADOT and better YAC per reception than in 2020.

If he can maintain or even slightly increase his 2021 per-game workload, he could be a low-end TE1/high TE2 for fantasy given his efficiency. I’m not interested in the other options in Green Bay as Tonyan will likely eat into their 2021 targets more than anyone else’s.

The Packers underwent a massive change with Davante Adams leaving. But not all hope is lost. There are still a lot of playmakers who can be valuable for fantasy.

Guys like Lazard, Watson, Jones, Dillon, and Tonyan are led by one of the best quarterbacks in NFL history. Trust the greats to figure it out.

That will do it for our 2022 Fantasy Football Green Bay Packers Preview! Make sure to come back and check out the rest of the team previews here on Fantasy Six Pack!

Want more fantasy football? See what else our team of writers has for you!