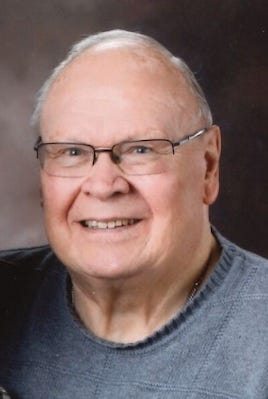 Ronald A. Daul, 80, of Glenmore, was called home to be with his Lord early Friday morning, July 1, 2022. The son of the late Maurice and Mary (Vande Hey) Daul was born on January 17, 1942. He was a graduate of De Pere High School, class of 1960. Ron then served in the US Army from 1962 until 1964, stationed in Germany, then in the Army Reserves until 1968. On April 23, 1966, he married Betty Lou Nohr at St. Mary Catholic Church, Greenleaf. Ron worked at Fort Howard Paper Co/Fort James for 32 years, retiring in 1997 as a member of the Quarter Century Club. After a year of retirement, he then worked part time at Monroe Truck Equipment. Ron enjoyed playing cards, snowmobiling, a good old fashioned and fish fry. He was always up for a good laugh and good times with family and friends. He was an active member of St. Mary’s Glenmore, St. Mary’s Catholic Community of De Pere, the Ledgeview Snowmobile Club, and the Knights of Columbus. Ron enjoyed many years of traveling with Betty throughout the world but was most proud of his trip to the Philippines and the dedication of the Betty Lou Daul Center in Quezon City after Betty’s passing on November 2, 2005. Ron has sponsored many children around the world through Children International and has given to many other charities. On Friday, August 29, 2008, Ron and Lorraine (Ashley) Kaiver were united in marriage at St. Mary Catholic Church in De Pere. On this day, Ron went from zero to seven children with a simple “I do”. Ron always looked forward to family visits from all. Ron was a man of great faith, always starting his day with Lorraine with “Jesus loves us!” Ron is survived by his wife Lorraine, brother and sister-in-law Lloyd and Betty Daul and their children who he though the world of: Jackie (Bill) Kempen and their children Tracy (Travis) Dumke, Corey (Natasha) Kempen, Krystle (Jason) Terry; Randy (Vicky) Daul and their children Adam (Lindsay) Daul, Alyssa (Jordan) Zirbel; Mike (Maria) Daul and their daughter Stephanie (Mitch) Korb; Sandy (Dean) Smerchek and their sons Jeremy (Lindsey) Swain, Newton (Jordy) Smerchek, Dalton Smerchek; Pam (Artie) Routhier and their sons Nathan and Evan Routhier; nieces and nephews Dan (Theresa) Daul, David Daul, Dale (Terry) Daul, Christine Daul, Mary Beth (Jim) Grutza. Lorraine’s children Vicki (Dan) Treml, Lisa (Wayne) Harrison, Amy (Glen) Johnson, Dave (Lisa) Kaiver, Beth (Scott) Daul, Don (Tina) Kaiver, Brandon (Brittany) Kaiver, grandchildren, great-grandchildren, many cousins, extended family and friends. Ron is preceded in death by his wife Betty Lou, his parents Maurice and Mary Daul, brother and sister-in-law Francis and Marilyn Daul, nephew Dennis, and great-nephew Eric. Visitation will be held at St. Mary’s Catholic Community (4805 Sportsman Dr, Ledgeview, WI) on Friday, July 8, 2022, starting at 9:00AM until 10:45AM. A Mass of Christian Burial will be held at 11:00AM with Fr. Mike Ingold officiating. Ron will be entombed at the Shrine of the Good Shepherd Mausoleum in Green Bay. Ryan Funeral Home is assisting the family. A memorial fund has been established at St. Jude Children’s Research Hospital.