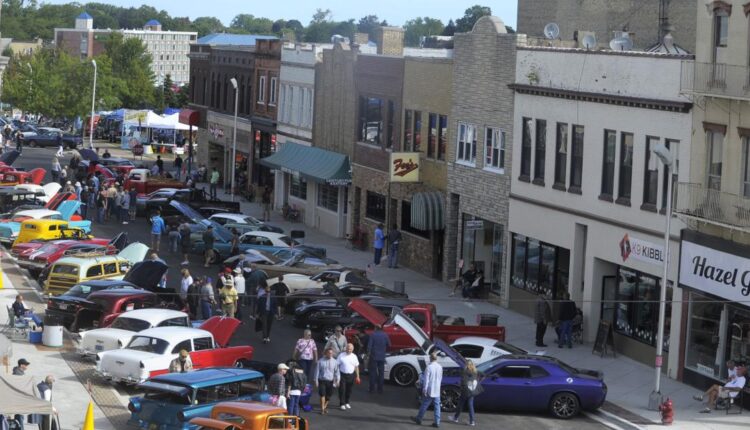 Where: Outside the Kenosha History Center, 220 51st Place

Known for: Welcome to all classic vehicles

Known for: Being the first stop of the 2022 US Title Series Powerboat Racing tour. Drivers from around the country gather together to race against the best in their classes.

Known for: Bring your bike and helmet for a leisurely ride through the park with a guide. Total distance is about 8 miles. Note: The ride is free, but a vehicle admission sticker is required.

When: 6 pm Saturdays and Wednesdays, May 28 through Sept. 3

Where: In Lance Park on Lake Mary, 55 Lance Drive in Twin Lakes

When: Home games are May 30 through Aug. 11 (Schedule at kingfishbaseball.com)

Known for: Weekly races on the historic velodrome, which opened in 1927 and is the oldest operating velodrome in the country. Spectators are welcome to “fill the hill” each week. Racers from Southeastern Wisconsin and Northern Illinois compete in various sprint and endurance track events. ([email protected])

Known for: The “grand launch” of more than 300 kites that kicks off the event

Where: Civic Center Park, on Sheridan Road between 56th and 57th streets

Known for: The comedy “Much Ado Nothing” is 7 to 9 pm The stripped-down, fast-paced production will be held in the Bong amphitheater. Bring your own lawn chair. Playing with Will Workshop is 5:30-6:30 pm Get outside with “Will” at this interactive workshop for kids 8 and up to explore acting, characters and creative play.

Known for: A festival showcasing adorable baby animals! There will be a large variety of local farm favorites (goats, chicks, piglets, alpaca, and more), as well as some exotic animals. Tickets are $10 per person; free for kids age 2 and younger.

Where: The Sesquicentennial Band Shell at Pennoyer Park, on Seventh Avenue at 35th Street

Known for: Performances with everything from John Philip Sousa marches to John Williams movie scores. This is the band’s 100th season.

Known for: Free performances in a wooden setting.

Known for: This three-day German-style biergarten features German and US beers, along with food and live music, children’s activities and stein-hoisting contests.

Known for: Cooking up zillions of scrambled eggs in a huge frying pan

Known for: Featuring a variety of artwork, plus food and live music.

Where: Outside the Anderson Arts Center, 6603 Third Ave.

Known for: A variety of music performed on the lakefront.

Where: Downtown Kenosha, along the harbor and the lakefront

Known for: Concerts, fireworks, live music and other summer fun, capped off by fireworks at dusk on July 4.

Where: Lance Park in Twin Lakes

Where: Starts on Seventh Avenue and Washington Road, heading south through Downtown.

Known for: Marching bands, clowns, politicians waving to the crowd. This year’s theme is “America the Beautiful.”

Where: In Pennoyer Park, on Seventh Avenue at 35th Street

Known for: Live music leading up to the city’s fireworks. The Kenosha Pops Concert Band performs a patriotic program at 4 p.m

Known for: Marching bands, clowns and candy tossed to the crowd

Where: In Pennoyer Park, on Seventh Avenue at 35th Street

Where: Hansen Park in Bristol

Where: Six local, private gardens, plus activities at the Gateway Horticulture Center

Known for: Being a self-guided tour, hosted by the Four Seasons Garden Club (4seasonsgardenclub.org)

Where: Just west of I-94 at the Wisconsin/Illinois border

Known for: Live concerts next to the Lincoln Park flower garden.

Known for: A party-type atmosphere, with outdoor concerts and mud fights in the campgrounds. Oh, there’s music, too, with national headliners.

Known for: This is a new event, with chalk art (the public can vote for their favorite), plus a beer garden, food and artisan booths. To sign up as a chalk artist ($35 fee), go to jerrysmithfarm.com/event/chalk-fest/

Where: Kenosha History Center, 220 51st Place and other lakefront areas

Where: At the lakefront on the east end of Kenosha’s Harbor Park

Known for: Lots of specialty food and beverage vendors, plus live music

Where: Outside the Wyndham Garden Harborside Hotel, 5125 Sixth Ave.

Known for: Tribute bands playing the music of popular groups like Chicago, Journey and Pink Floyd.

Where: Bandshell in Pennoyer Park, at Seventh Avenue and 35th Street

Known for: Sweet corn (naturally), plus other food, a petting zoo and children’s activities

Where: Kenosha County Fairgrounds at Wilmot

Known for: Demolition derby action — and plenty of fried foods!

Known for: Bringing in big-name jazz and blues artists

Known for: Live music, food trucks and fireworks at dusk.

Where: The streets of downtown Kenosha

Known for: Being a huge car show, displaying all makes and models of vehicles and motorcycles

Known for: Live music, plus about 60 artists displaying their creations along the wooded trails and gardens of Hawthorn Hollow

Where: Harbor Park, in Downtown Kenosha at the lakefront

Known for: Sampling of beers from area breweries and home brewers.

Where: Veterans Memorial Park, downtown at the harbor

Watch: UVA Doctor Talks About the State of the Pandemic and Health Equity