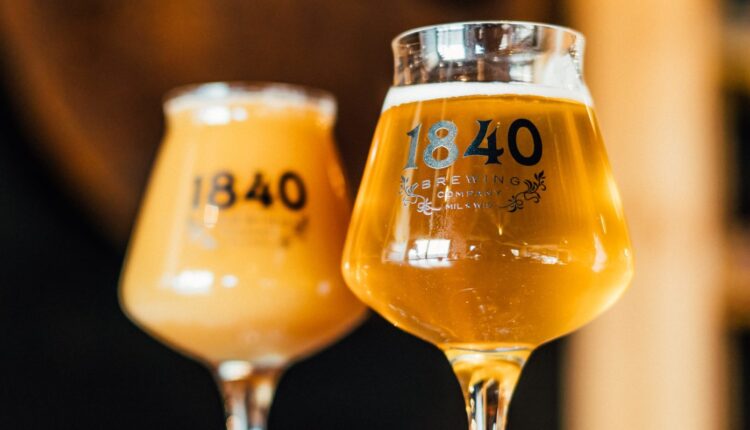 It’s an anniversary week for 1840 Brewing Company (342 E. Ward St.) and the fun kicks off with a beer dinner with Trouble Maker’s Cocina: Mad Mexican Food. The four-course dinner runs from 6 to 8 pm and costs $65.

Klub Kölsch is nearing an end at New Barons Brewing Co-op (2018 S. 1st St.). Get there between 6 and 8 pm to vote on the Kölsch-style beer you think should earn a coveted spot in the taproom. Details are on the New Barons events page. The cost is $10.

Amorphic Beer (3700 N. Fratney St.) is releasing This Is My Serious Face IPA in the taproom this week. Try it on tap before it’s available in cans on Wednesday, July 27.

It’s not a Ted Talk, but a Tim Talk might be the next best thing (or maybe not). Black Husky Brewing (909 E. Locust St.) founder Tim Eichinger hosts the Tim Talk while guiding attendees through a tasting a few beers. The self-deprecating Eichinger presents his “worst talk” starting at 6 pm Tickets are just $25. Reserve your spot by emailing [email protected]

The Plant & Sip Succulent Bar comes to The Tap Yard Milwaukee (1555 Rivercenter Dr.) from 6 to 8 pm For $60 you can build a tiny garden and enjoy a free beer in the process.

Component Brewing Company (2018 S. 1st St.) has a cool and crafty event from 6 to 8 pm Two Mikes Factory will be there hosting a workshop to create a personalized beer flight board. For $65 you get the glassware, flight board and art supplies needed to create something unique. You also get one free beer from Component.

Lakefront Brewery is tapping a ceremonial keg of My Turn: Anthony Kellerbier at 6 pm at the Estabrook Park Beer Garden (4600 Estabrook Pkwy.). The first half barrel is free.

Supermoon Beer Company (3145 S. Howell Ave.) has a pair of beer releases this weekend and that means the pop-up taproom is open from 3 to 8 pm on Friday and noon to 7 pm on Saturday. The beers are Oaxen, an abbey-style pale ale fermented in oak, and Inside of Outside, an oak-fermented hoppy saison that’s a collab with Hacienda Beer Co. Preorder for both started on Monday.

Third Space Brewing (1505 W. St. Paul Ave.) is releasing the latest in the Beers about Nothing Innovation Series. Milwaukee Mule is a fruited sour with lime and ginger. Perfect for summer imbibing. Copper mug is optional.

Covid canceled plenty of Christmas parties. New Barons is making up for it with a Christmas in July party from 6 to 10 pm Santa will be there, because what else does the jolly old elf have to do in the summer?

1840 Brewing’s big fifth anniversary week culminates with a street party from noon to 10 pm to honor the occasion, 1840 is releasing five different beers and having live music and food available. It’s a can’t-miss event for craft beer lovers.

The Tap Yard Waukesha is devoting a good portion of its tap lines to IPAs from a few different breweries. Conveniently, The Tap Yard is also giving up some taps to 3 Floyds and WarPigs. And, they’re having a meat raffle. Need any other reasons to be there?

Raised Grain Brewing is bringing its beer to the next Farmhouse to Brewhouse Seasonal Beer Dinner at Old World Wisconsin (W372 S9727 Hwy. 67, Eagle). The locally sourced dinner runs from 4:30 to 7:30 pm and costs $99.

Ever want to demolish a car? Component Brewing and New Barons are giving you that chance. Head to the Lincoln Warehouse for between 2 and 6 pm to join the two breweries and Bust-N-Stuff in the demo. For $20 you get a minute taking a sledge hammer to a car. All proceeds benefit The Sojourner Family Peace Center.

From 2 to 10 pm, Gathering Place Brewing (811 E. Vienna Ave.) is hosting a beer and plant sale. Help Gathering Place clear out its cooler and benefit from great deals on bottles and cans. Bayside Garden Center will have a mobile greenhouse parked in front of the brewery from 2 to 6 pm with plenty of plants for sale.

Head to The Tap Yard Milwaukee for BBQ Fest from noon to 7 pm A handful of barbecue food trucks will be there, and there are plenty of tap beer options to choose from to wash the barbecue down.