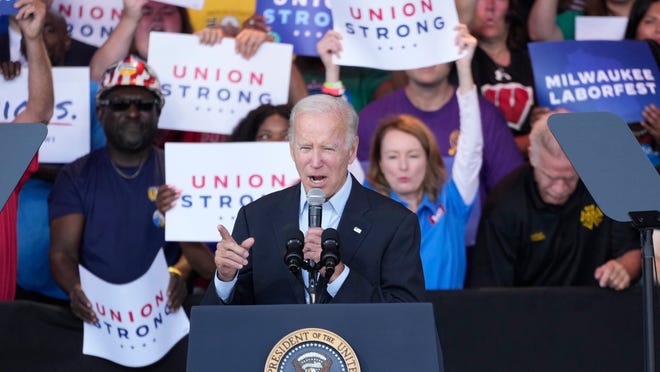 The midterms are on.

But let’s get real: Biden’s speech at Henry Maier Festival Park kicked off the most important leg of the midterm races as Democrats and Republicans battle for control of Congress and key statehouses around the country, including Wisconsin.

Here are five takeaways from Biden’s speech and the big labor event.

It came in two parts.

“I wouldn’t be here without unions,” he said, launching into an extended riff on the importance of work.

Biden then carried a political message as he said the country was at an inflection point, whether it wanted to move forward or backward, to build a future “or obsess about the past.”

“But the extreme MAGA Republicans have chosen to go backwards, full of anger, violence hate and division. But together we can and we must choose a different path.”

Biden had several pointed remarks against Republican US Sen. Ron Johnson, who is running for a third term against Democratic Lt. gov. Mandela Barnes.

Biden hit Johnson on drug pricing, key social insurance programs and the Jan. 6 insurrection at the US Capitol.

“He wants to put Social Security and Medicare on the chopping block,” Biden said, a reference to Johnson seeking to make those programs and others part of annual budget negotiations.

More:Sen. Ron Johnson says Social Security ‘was set up improperly’ and would have been better invested in the stock market

Biden also took issue with Johnson’s remarks on the insurrection.

Mandela Barnes was not on stage

A big question in an election year with a president who is underwater with the public. Midterms are usually tough for the party that holds the White House.

U.S. Rep. Gwen Moore was there, giving her typical stem-winder of a speech.

So what Democratic Gov. Tony Evers, who faces Republican candidate Tim Michels in the fall. “I am the only candidate for governor who has actually bargained for a public sector union. The only one,” Evers said.

But missing on stage was Barnes. His campaign said the lieutenant governor marched into the Laborfest parade.

Biden gave Barnes a shout-out: “He’s going to be your next United States Senator.”

Milwaukee Mayor Cavalier Johnson and Milwaukee County Executive David Crowley made sure to greet Biden on the tarmac after Air Force One arrived at Mitchell International Airport.

They got shout-outs from Biden, as well.

Michels actually trekked to Milwaukee’s lakefront to deliver his message about how Biden and Evers are “two peas in a pod. They’re politicians that are in way over their heads. They’ve done nothing, nothing but come up with bad policies.”

Johnson used some time during a teleconference to jab at his opponent, Barnes.

A big day for organized labor

AFL-CIO President Liz Shuler, in the post for a little more than a year, gave an upbeat address about union successes around the country and added: “Even cannabis workers are organizing.”

Shuler noted a Gallup Poll that showed approval of unions was at its highest since 1965 and said, “That’s because this president is not afraid to say the word union.”

More:Union organizing efforts have succeeded at some local businesses. How strong is this latest burst of activity?

Moore told the audience: “Working men and women of Wisconsin the last few years have been really tough. But I’m here to report Wisconsin is stronger.”

Labor Secretary Marty Walsh said “there has never been a more pro-worker, pro-labor president in the history of the United States” than Biden. Without mentioning former Gov. Scott Walker by name, Walsh criticized him for “decimating the rights of public-sector workers.”