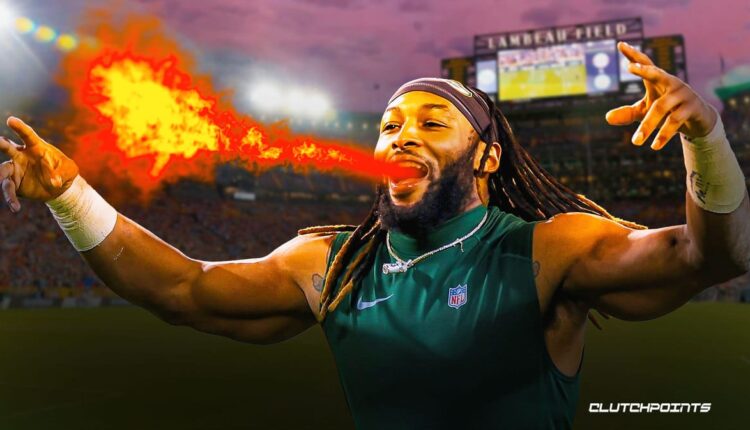 Green Bay Packers star Aaron Jones let his feelings known after a fan page and website suggested Green Bay to move on from him.

Replying to a tweet for an article titled “Three Reasons The Packers Should Cut Ties With Aaron Jones,” the veteran running back admitted he was hurt by the suggestion. He added that he used to love the page, but clearly, that’s not the case anymore.

“Damn this one hurts cause I LOVED y’all’s Twitter page,” Jones wrote along with a cold face emoji.

The article suggested that Aaron Jones’ contract, position and age are major reasons why the Packers should consider parting ways with the running back, noting that Green Bay could benefit financially by cutting Jones. Not to mention that the author believes he’s at the age where he would soon slow down in a position that’s not really that important for the team.

Nonetheless, it is clear that the Packers don’t feel the same way. After all, Jones is coming off a career year when he recorded a career-high 1121 rushing yards with an average of 5.3 yards per carry. He also caught 59 passes for Green Bay and tallied five touchdowns in the process.

It is true that Jones’ contract is a big issue for the Packers since his salary cap hit increases to $20 million in 2023. Despite that, general manager Brian Gutekunst said they “expect” to have Jones back next season, per Yahoo Sports.

“He’s a dynamic player. For a guy his size, to bring it every day, he rarely misses a practice, rarely misses a rep. The way he leads our football team, his consistency is amazing,” Gutekunst said of Jones.

Time to set goals to help others all year