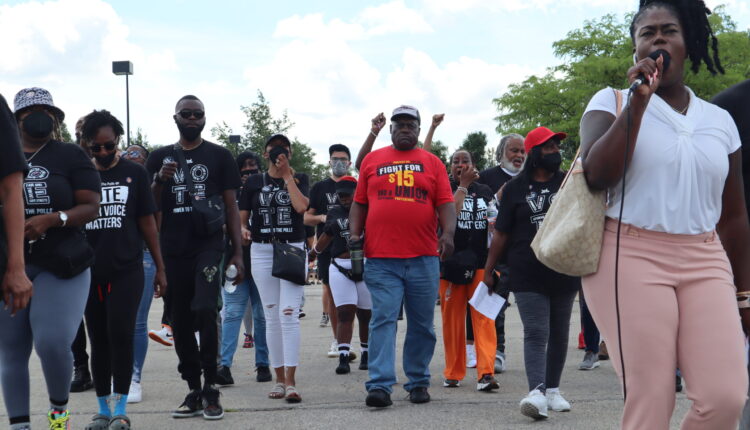 Voting rights activists, community organizers and elected officials gathered at the Midtown Center in Milwaukee Tuesday to mark the first day of early voting for the Aug. 9 primary election — a call to the polls that focused on the voting power of minority and marginalized communities.

Voting is a means to shape democracy, Anita Johnson, community outreach manager for Souls to the Polls, told the crowd gathered at the early voting site.

Anita Johnson of Souls to the Polls. (Photo | Isiah Holmes)

“This election affects our voting integrity, our health, the abortion laws, Social Security, our children, their school districts, concealed firearms, people with disabilities,” said Johnson. “These are issues that affect our daily lives. All you have to do is vote for leaders to represent us and support our interests. You have the power.”

Milwaukee County Board of Supervisors Chairwoman Marcelia Nicholson recalled her first time voting, which was for former President Barack Obama. “To me voting is liberating,” said Nicholson. “For someone like me who grew up in the 53206 zip code, I never knew I could see someone like me ascend to the highest office in the land.”

For Nicholson, the trajectory from casting her first vote to being elected to office — and now to her first term as county board chair — is clear and direct. She recalled the spring election of 2020, which became known as Wisconsin’s “pandemic primary.” As the world ground to a halt because of COVID-19, many polling sites in Milwaukee’s minority neighborhoods closed down for the primary. This forced residents to congregate at the five remaining polling places in the city — including elderly residents who weighed their right to vote against potentially becoming another COVID statistic. 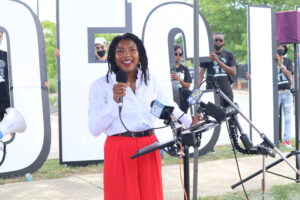 “We can remember the lines people stood in for hours in the rain, in the height of uncertainty around the COVID-19 pandemic,” said Nicholson. “I remember passing out bottled water and ponchos while people stood in lines almost a mile long, it seemed like. It looked like a scene out of a movie about the voting rights movement. Could you believe it was 2020?”

Nicholson added that “in the face of these cruel tactics, we must remain vigilant.” Last week, a resolution was introduced at the county board to provide $50,000 to the Milwaukee County election commission to expand voting outreach and protect free and fair elections going forward. 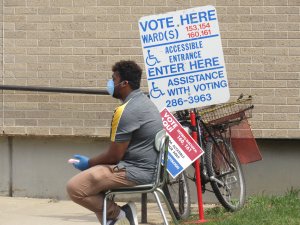 A poll worker sits outside of Washington High School wearing a protective mask during the spring 2020 primary. (Photo by Isiah Holmes)

At Tuesday’s rally, George Christenson, Milwaukee County Clerk, applauded the investment. “We will use this money to encourage and educate voters to get out and exercise their right to vote,” he said. Working with Souls to the Polls and other community organizations, Christenson hopes the county will be able to show Milwaukee’s most marginalized communities especially that safe and accurate voting is at their fingertips.

The event included a vocal performance by Mikayla Hughes, 19. Tuesday was  the second time Hughes has voted in her life and she urged young people like her to vote as well. “Voting is so important to me because we’re able to get people in office who look like us and support the same values as us,” she said.

Members of Vets for the People, which sent organizers up to Wisconsin from Texas to organize veterans, were also in attendance. Representatives from the Milwaukee branch of the NAACP outlined efforts to bring candidates to the people.  All but two of the candidates for U.S. Senate showed up at one such forum. One candidate had a scheduling conflict, while another outright refused to attend. 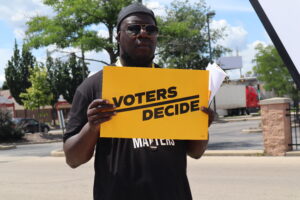 The Wisconsin Republican Party opened a field office on Milwaukee’s predominately African American North Side in early 2020 — apparently an attempt by the GOP to temper Milwaukee’s strong tendency to vote for Democrats. Over the last year Republican state legislators have emphasized criminal justice, seeking harsher penalties, proposing a constitutional amendment to set tougher standards for bail and attacked the Milwaukee County district attorney’s office for being soft on crime. The recent rash of U.S. Supreme Court decisions, such as overturning of abortion rights, is another flash point for some voters. 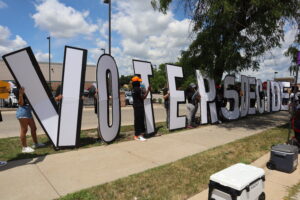 “We must be able to vote against or for certain things that will affect our life,” said Forbush. She highlighted legislation that would lead  abortion providers to be charged with felonies, and could lead to charges for women who have had a miscarriage.

“You know what people with felonies can’t do? Vote,” Forbush said. “There’s no reason to think that these fascist people in power will stop at voter suppression. They’ve showed us time and time again that they do not care about people having the right to vote.” 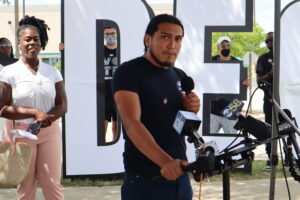 It’s a fight with a lot on the line said Alam Chavoya, outreach chair for the Milwaukee Alliance Against Racist and Political Repression (MAARPR), who emphasized how these fights are often interconnected.

“At the Milwaukee Alliance, we consider voter suppression to be political,” explained Chavoya. “As long as the continuum of racist oppression that mainly affects Black, brown and poor people exists, efforts to prevent these people, our people, from improving our living standards and fighting against oppression will continue.”

Chavoya decried far-right rhetoric from the Republican Party, but he also took aim at inaction from Democrats. Both, he said, feed a movement that will ultimately prove dangerous for marginalized people’s right to vote. “Now is the time, more than ever, to fight in every arena of struggle to get our rights back,” he said. 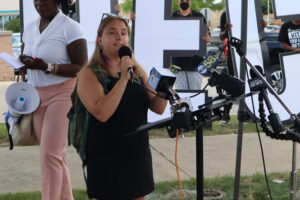 Rev. Greg Lewis of Souls to the Polls dreams of a day when voting would be as simple as going to a local McDonald’s and getting a ballot with a meal. Until that happens, he remains fiercely determined to remind minority voters that they matter.

It’s an observation often made during the last election, as observers wondered whether Milwaukee voters would mobilize behind Joe Biden or stay home on Election Day, as some did in 2016. 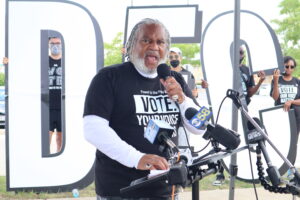 Becoming emotional, Lewis stressed that now it’s more important than ever to vote. “That is so stupid, for you to not understand your power right now,” he said in a booming tone.

“You’re the most powerful people in the world right now,” he added. “In the state, folks are split. In the country, folks are split. And you make a difference, but you have to take yourself serious. Stop putting yourself down, believe you’re somebody, believe that you count, understand you have hope, don’t just lay down and let people just walk all over you! Stop letting things happen to you, make things happen for you.” 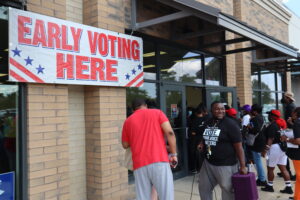 For Lewis, who calls voting “pure energy,” it’s an all-hands-on-deck sort of moment. “This time is for real!” Lewis declared. “If we don’t get out now, if you think things are bad for you now, don’t go out and vote and I can guarantee you you’ll regret it. And you’ll be sitting around looking at each other crazy, because you could have done something about it.”

Health Insurance Price Data: It’s Out There, but It’s Not for the Faint of Heart