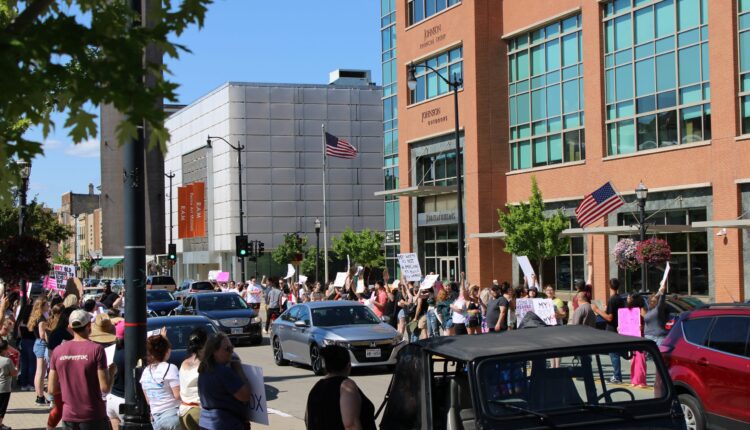 Wisconsin women likely won’t get any concrete answers until after the November elections about when or if access to abortion will resume.

When the US Supreme Court effectively overturned the 1973 Roe v. Wade decision in June, Wisconsin residents were confused about what it meant for women’s reproductive rights. As it turns out, the most simple solution could be repealing the 1849 law that makes it a felony to perform an abortion, said Mike Murray, vice president of external affairs of Planned Parenthood Advocates of Wisconsin. But state Republicans are unlikely to make any moves until after the November elections.

The state’s 1849 criminal abortion ban makes it a felony for anyone to perform an abortion after the mother feels fetal movement except to save the life of the mother.

An 1858 law is even more restrictive, making it a felony to abort at any point after conception. The penalty associated with the felony charge is up to six years in prison or up to $10,000 in fines.

Both laws were neutralized when Roe v. Wade held that the decision to terminate a pregnancy in the first three months was solely up to the woman affected. Wisconsin lawmakers passed legislation in the intervening years that restricted abortion to before 20 weeks of gestation and required a mandatory waiting period and the woman getting an ultrasound. Both laws are in effect.

Wisconsin State Attorney General Josh Kaul and Gov. Tony Evers filed a lawsuit challenging the 1849 law on the basis that it is unenforceable because it conflicts with laws passed since Roe v. Calf.

As the Journal Sentinel story notes, the state Supreme Court leans heavily conservative and is unlikely to agree with Kaul’s and Evers’ reasoning. Whether the case could make its way to the US Supreme Court eventually to trigger another showdown remains to be seen.

Vos, Kapenga, and LeMahieu filed a motion on Aug. 22 to dismiss the Evers/Kaul lawsuit because, they said, they are the wrong individuals to name since legislators don’t enforce the law. Moreover, the motion asserts that as lawmakers, they are immune from civil law suits, especially one brought by the state’s governor.

Racine County Eye talked to Racine County District Attorney Tricia Hanson, Representative Greta Neubauer, Vos, and Murray for their take on where the state stands and where it could go from here.

Hanson: “I’m hopeful a case never comes to me”

Abortions have never been available in Racine County. Women who wanted to obtain one had to travel to Milwaukee, Sheboygan, or Illinois, where abortion access remains legal despite the SCOTUS ruling. When Racine County Eye talked with her shortly after the decision, Hanson said Roe was a poorly written law and that states should have cleaned up their legislation based on the Supreme Court’s decision.

“Everyone just kind of threw up their hands and said, ‘We won,'” she said. “Advocacy groups should have pressed for cleaner legislation at the state level to avoid the mess we see today.”

The Washington Post ran a story about a woman who experienced an ongoing miscarriage. She bled for ten days after seeking treatment because emergency room staff refused to remove the fetal tissue inside her, citing the state’s abortion law as their reason for withholding care. dr Carley Neal, an OB/GYN from Lake Geneva, told the newspaper the woman came to see her and was at serious risk of infection.

So, what happens if a doctor treats their patient with the same procedure in Racine County?

Hanson wondered if she would even know about it because of existing privacy laws like HIPAA (Health Insurance Portability and Accountability Act), signed into law in 1996. HIPPA protects patient health records by giving patients more control over who has access to their information. But on the off-chance someone were to report a physician, Hanson said the decision to charge individuals with crimes is ultimately her decision, but she hopes she never has to make that consideration.

“I’m hopeful a case never comes to me, but if it did, I would take situations on a case-by-case basis.”

“My struggle is that my opinion could run contrary to law, but it’s absurd to think a woman shouldn’t get the care she needs and has to wait for the legislature. There’s no way I’d step in front of maternal health in a situation like that.”

“I can understand why people are confused,” Neubauer said shortly after the decision came down. “On the one hand, we have this 173-year-old law, but we also have a number of laws passed since Roe in 1973.”

Neubauer believes Gov. Evers and AG Kaul have a solid legal argument based on the laws passed since Roe that also regulate when abortion can be accessed.

“How can abortion be both legal and illegal? I think the reasoning that the more current laws have more weight is sound.”

And while she doesn’t rule out sitting down with her Republican colleagues to discuss a way forward, for now, state Democrats are focused on repeating the 1849 bill.

“State residents deserve full access to medical autonomy and to medical procedures that are between women and their doctors,” Neubauer stated.

Vos: I want abortion to be unnecessary

Vos said in July that state Republicans in Madison haven’t had a chance to sit down and talk about where the party stands on what it would mean for Roe v. Wade to be overturned. They didn’t need to since Roe was the law of the land. Racine County Eye has not been able to connect with Vos about whether Republicans have had those conversations in the intervening weeks. Most likely, any talks will wait until after the November elections and the Legislature reconvenes in January.

Any abortion law should always include exceptions for rape, incest, and maternal health. Rape and incest survivors have already become crime victims and should’t also have to carry their rapist’s baby, Vos said.

“We can’t sacrifice the mother, including her mental health, after she’s already suffered as a result of being a victim of a crime.”

Vos is up for re-election and faced a primary on Aug. 9 against Adam Steen, who supports Pro-Life Wisconsin’s position that the fetus and mother’s lives should be treated equally and that rape and incest should not be listed as exceptions to the state’s abortion ban. He also wants to outlaw contraception, including Plan B, the morning-after pill, according to a story from WKOW, the ABC affiliate in Madison.

Vos came out ahead by 260 votes on primary election night, but Steen is mounting a write-in campaign for the November election.

“As I’ve been going door-to-door in Racine County, I’ve talked with residents on both sides of the issue, and no one wants abortion used as birth control,” Vos said. “But that’s exactly what will happen if contraception is outlawed.”

Vos said he wants wider access to birth control, including reclassifying it as an over-the-counter medication, to make abortion unnecessary. He would also like to make the morning-after pill easier to obtain as well, especially for victims of sexual violence.

Murray: Chapters still to be written

According to Murray, one of three things needs to happen now that Roe v. Wade has effectively been overturned:

He agrees with Neubauer about the legal argument laid out in the Evers/Kaul lawsuit, saying felony punishments are too extreme for doctors and citing the more recent laws passed.

“It was already really hard to obtain abortion care in Wisconsin. Even with a full repeal of the criminal ban, a large number of women would be unable to access abortion services anyway given the laws passed since Roe.”

Are exceptions a reasonable way forward?

Murray believes Vos and other pro-life lawmakers who say they support exceptions for victims of rape and incest are a reasonable way to find common ground on abortion are not actually being reasonable. He points to the number of sexual assaults that already go unreported to help support his position.

“Exceptions for crime victims require their disclosure, and what if they don’t want to?” he asked. “For Medicaid recipients, this is already a requirement. But for women who want to keep their assaults private, why shouldn’t they have that option and still access abortion care?”

Between 2017 and 2019, an average of 4,412 sexual assaults were reported in Wisconsin, the majority – 87% against women, according to the state Department of Health Services. Nearly a third – 32% – of assault survivors were between the ages of 15 and 24. Data included in those statistics suggest that almost 75% of all sexual assaults go unreported, pushing estimates of how many assault survivors there are statewide to 17,600 for that same time period.

Talk of exceptions means we’ve already failed patients, taking healthcare out of the hands of doctors because we can’t foresee each individual case, Murray added.

In reference to maternal health, Murray again pushes back because, without a full repeal of the criminal ban, doctors will understandably worry about prosecution.

“Who decides when the mother is sick enough? These are personal and sensitive decisions, and the issue is even more amplified by the possibility of criminal charges for the doctor,” he said. “Abortion care is like any other health care. Parsing exceptions is never really about the needs of the patient.”

Racine County Eye reached out to Vos to answer some follow-up questions, but we haven’t heard back yet. We will update this story when we do.