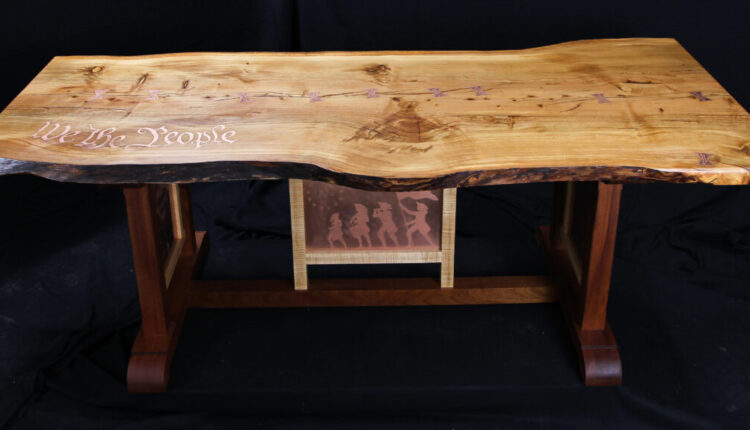 Eric Horton, manager of the Klingspor’s Woodworking Shop in Winston-Salem, North Carolina, said, for a surprise the day his lumber buyer came across some original tree slabs from Founding Father James Madison’s estate. The slab that really piqued Horton’s interest was a cedar one allegedly gifted by the Marquis de Lafayette to James Madison when he visited America in 1824. Oral history suggests that Lafayette brought cedar seeds with him as a gift to Madison from the country of France. Cedar trees are not native to North America, which makes the slab that much more special.

The slabs arrived rough sawn and completely unfinished. They estimated to be around three inches thick. By the time Horton was done, they were two inches, flattened, leveled, and completely finished.

Illustration of the Liberty Bell is etched into the copper panels of the table. (Courtesy of Jason Byers)

Horton explained that it took him six or seven months of contemplating to decide the best project for the wooden slab. However, he always knew that he wanted it to be Constitution-themed. “And so I knew that somewhere I wanted to inlay We the People, I just wasn’t sure what I was going to inlay,” he said. He finally kick-started the project in early April 2021 and decided on a copper inlay, inspired by Paul Revere, a coppersmith and significant figure in the American Revolution and the Boston Tea Party. Horton explained he had never dabbled in metalwork but was determined to make his vision come true. “That’s where the idea of ​​the copper ‘We the People’ came from on the top of the table,” he said. But that wasn’t all. Horton had to also learn acid etching in order to illustrate the copper panels with images from the Revolution and the Constitution. That summer, he taught himself acid etching and created custom-made, hand-cut stencils featuring all of the images. 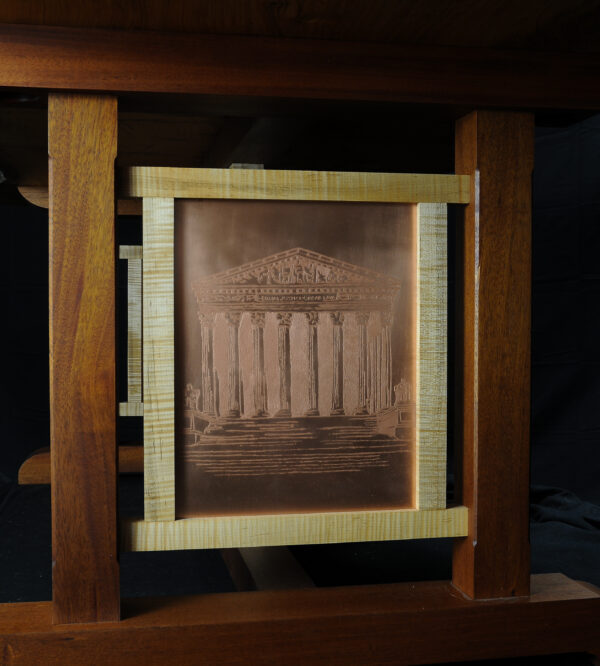 Illustration of the US Supreme Court is etched into the copper panels of the table. (Courtesy of Jason Byers)

Every design was carefully chosen, highlighting a particular part of America’s story. Key images incorporated into the Madison table include a central copper panel illustrating drummer boys and flag bearers, chosen to represent the American Revolution. A preamble to the Constitution is acid etched in constitutional script on a panel on the left, inner end of the table, while the right, inner side has an image of the Liberty Bell, representing Independence Hall. The outer three sides of the table depict all three branches of the federal government: the Supreme Court, the Capitol dome, and the White House. Accompanying these symbols are copper butterflies flowing across the top of the table. Half an inch thick, they are made of solid copper and outline the 10 amendments to the Bill of Rights.

The entire project lasted seven months, and Horton dedicated nearly 500 hours to crafting the table. It often meant getting up early in the morning to work on the project. While challenging, it meant he would still have enough time in the day to attend to his family and work duties. 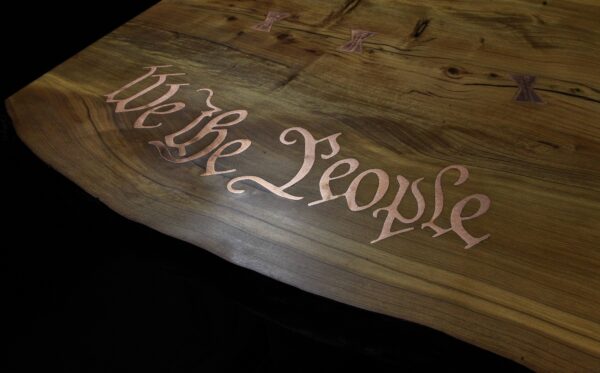 As a history lover, Horton explains his dream job would be to someday start a woodworking business specialized in repurposing historic, sentimental pieces. Three years ago, Horton received a message from a lady who asked him to repurpose her son’s old, broken piano into something more practical. “I tore that piano apart and turned it into an entryway hall bench. She absolutely loved it because it still had hints of a piano but was actually useful and not just taking up space in her home,” he said.

Horton considers the Madison table as his most time-consuming and expensive piece to date and wishes to someday sell it to the right person.

This article was originally published in American Essence magazine.