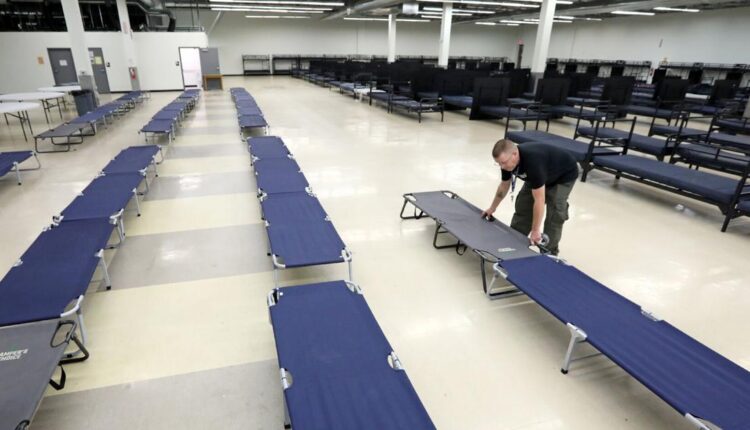 Even before this week’s perilous weather, pressure on the area’s homeless shelter system has been building, with the men’s shelter setting a record on Monday night and the women’s and families’ shelters also seeing high numbers.

“I foresee we’ll have even more for this blizzard,” Fares Fares, manager for Porchlight’s drop-in shelter, where cots and bunks have been added to increase capacity, said Wednesday.

Take an aerial tour of the completed homeless encampment at Dairy Drive in Madison in early November 2021, just prior to move-in.

“Porchlight has been managing the men’s shelter since 1987, so we have been through many snowstorms and bitter cold temperatures,” Executive Director Karla Thennes said. “We are grateful to be in one large location where our staff can work together as a team and serve guests adequately spaced out.”

The nonprofit has seen its number of average guests increasing since July, when it recorded an average of 141 nightly guests, said Kim Sutter, director of services. The numbers increased through the summer and early fall and hit an average of 183 a night when the city shifted shelter locations to Zeier Road in October. The average increased to 194 in November and 205 in December, Sutter said.

Meanwhile, the Salvation Army of Dane County has seen high demand at its women’s shelter, 630 E. Washington Ave., and its shelter for families with 35 rooms at the former Karmenta Center, 4502 Milwaukee St., which opened in May 2021, city officials and homeless activists said.

The increased shelter use likely comes from a combination of an early onset of winter weather, better and larger shelter spaces, and the ending earlier this year of city and Dane County programs that sheltered more than 100 people at a large hotel on the East Side, O’Keefe said.

In four months, the city transformed a vacant, former big-box store near East Towne Mall into a bright and spacious temporary shelter for homeless men, who began moving in on Oct. 13.

The structure features a large, airy space — a former sales floor — where the city located beds and created a living area.

“The shelter space is going well,” Thennes said. “The city did a great job of renovating the facility all summer with the needs of our staff and guests in mind.

“The guests like the individual bathrooms and showers, including handicap-accessible bathrooms and showers,” she said. “We have added individual lockers and a phone charging station for guests at the new location, and they are both well received. We had to add a few bunk beds in order to increase capacity, and the guests did not like the bunk beds. No one wants to be on the top bunk.”

Porchlight provides an evening meal and breakfast, case management and COVID-19 screening and physical health screenings via telehealth. It continues to offer COVID vaccinations and now flu shots to guests.

Jamie Herren, a homeless volunteer at the men’s shelter, rests at his bed, which is in a separate area for volunteers. He has been homeless for about a year.


“I think it’s a lot better,” said Jamie Herren, who has lived in Madison for about seven years, became homeless due to income issues about a year ago, and now stays at the men’s shelter and serves as lead volunteer there. “It’s a lot cleaner and a bit more up to date. (But) the people don’t ever change.”

The shelter was designed for a capacity of 150 but expanded to 200 for emergency use. Porchlight now has a combination of beds, cots and bunks for about 250 men, Sutter said.

The combination of spaces — the improved men’s, women’s and families’ shelters plus the city’s tiny shelter encampment with 29 tiny units at 3202 Dairy Drive on the Southeast Side and tiny hut and shelter communities on the East Side — have meant fewer people living on the streets, in cars and in tents, O’Keefe said.

It’s hard to get an exact count, but perhaps 50 people are unsheltered now, he said.

“We are seeing record numbers of people in shelters, which is good if more people are willing to go to shelter and are not outside,” said Brenda Konkel, a longtime advocate for the homeless and executive director of MACH OneHealth, which operates the city’s shelter camp at Dairy Drive.

But many challenges remain.

“I think after COVID and all the changes in the system, many of the agencies are struggling with capacity to get things done and keep staff,” Konkel said. “The upcoming storm has really bad timing as many agencies were prepared to have their staff take some time off over the holidays for self-care.

“Other challenges are that the last few years people were able to be out in the open and were easier to find — we have gone back to the days where people have to hide so they have a place to sleep outside,” she said. “But then it also makes it difficult for outreach workers and people who want to support them to find folks.”

Jamie Herren, a volunteer at the men’s shelter, arranges food before the shelter opens.


Also, there are limited spaces for the homeless to go during the day, O’Keefe said.

Currently, the men’s and women’s shelters are for overnight use and only the family shelter allows guests to remain there 24/7, meaning that many homeless go to The Beacon homeless day resource center, 615 E. Washington Ave.

“We’re really stretched in terms of daytime facilities,” O’Keefe said. “We have to provide a way to provide a place during the daytime hours that complements The Beacon during periods of severe weather.”

The COVID-19 pandemic has meant unprecedented federal resources to aid the homeless, and Madison is using it in many ways. But what will happen

Get Government & Politics updates in your inbox!

Hundreds of US Hospitals Sue Patients or Threaten Their Credit, a KHN Investigation Finds