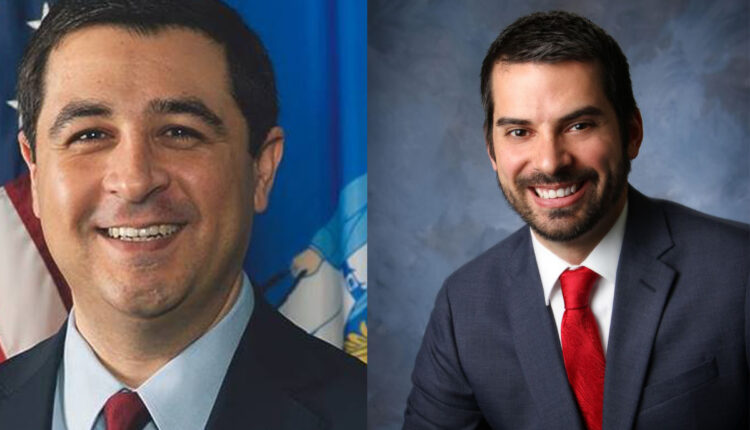 With voters often pointing to crime and gun violence as issues at the top of their mind as they head to the polls this fall, Wisconsinites are choosing between Democratic incumbent Josh Kaul and Republican Fond du Lac County District Attorney Eric Toney to be the state’s top law enforcement official.

Kaul, running on his record in his first term as attorney general, has said he would work to institute his “safer Wisconsin” package of legislation. The $115 million package of bills would use the state’s multi-billion dollar surplus to invest in community policing and violence prevention initiatives; limit access to guns; provide support for people affected by drug addiction or mental illness and increase the number of prosecutors working on violent crime.

“The level of violence we have seen in Milwaukee but also communities across the country in the wake of the pandemic is unacceptable,” Kaul said in a debate hosted by WISN TV’s Upfront earlier this week. “As the attorney general, I have overseen a department that investigates and prosecutes the most serious crimes in the state of Wisconsin, we’ve put serial rapists behind bars, we’ve worked on cases where there are homicides and the body cannot be found.”

Kaul touted both his previous experience and his first term. “I’m a former federal prosecutor and we need somebody who brings that kind of experience to the job,” he said. “I have proposed comprehensive public safety plans. My safer Wisconsin plan would invest in law enforcement, invest in victim services, it would invest in mental health crisis response, it also proposes common sense gun safety measures like universal background checks.”

Toney has accused Kaul of letting the state Department of Justice (DOJ) lose staff members during an increase in violent crime. In the Upfront debate, he repeatedly pressed Kaul on the issue of staffing in the department’s Division of Criminal Investigations. Toney has said 18% of the special agent positions have been left unfilled.

“I’m challenging our attorney general — release the organizational charts for DCI, redacted without names, to see how many positions there are, how many vacancies there are,” Toney said. “You’ve refused to address that issue.”

Kaul has repeatedly disputed Toney’s assertion. Reporting from WisPolitics.com shows that 10% of DOJ’s special agent positions are currently vacant, along with 13% of the criminal prosecutor jobs, numbers that are lower than Toney’s claims.

“That data is accurate,” Kaul said. “Mr. Toney has seen that, so what he’s been saying for this debate is a lie.”

The race has also focused heavily on the state’s abortion ban, which was reinstated this summer after the U.S. Supreme Court overturned Roe v. Wade. The law makes it illegal for doctors to provide an abortion, except to save the life of the mother.

Kaul has filed a lawsuit seeking to have the ban, enacted in 1849, declared unenforceable. Kaul has said Toney is “eager” to enforce the ban. Toney has said he is focused on “the rule of law” and if the law says abortion is illegal, he’ll make sure it’s prosecuted.

“We need to give our attorney general the authority to prosecute. They already would have the technical authority to investigate it,” Toney said during the interview. “And I think another approach would be allowing for adjoining counties to be able to investigate and enforce that abortion ban in Wisconsin.”

Joe Oslund, a spokesperson for the Kaul campaign, said in a statement to the Milwaukee Journal Sentinel that Toney’s plan would create “roving abortion ban enforcers” which, he added, “should be deeply concerning to all Wisconsinites.”

Hovering over the race is the campaign talking point Republicans have aimed at Democrats running for governor, U.S. Senate and attorney general — that Democrats don’t do enough to support law enforcement.

Last week, an attorney for the Kaul campaign sent letters to five Milwaukee-area TV stations asking that they not run an ad from an outside group affiliated with the Republican Attorneys General Association claiming that Kaul doesn’t care about” police and prosecutors.” The ad claims Kaul cut funding for the state’s crime lab, officer training and the state prosecutor’s office.

The ad “contains multiple assertions that are demonstrably not true,” the Kaul campaign attorney, Christopher Meuler, said in the letters. The ad’s cited source is a press release from the Milwaukee Police Association, which has endorsed Toney in the race.

In his requested DOJ budgets during his term, Kaul has asked for increases in funding to the crime lab, officer training and a boost in the number of assistant district attorneys working around the state.

“There is a difference between debating versus peddling false information,” Meuler wrote.  “As demonstrated herein, the assertions in the ad at issue aren’t even arguably true.”

In an attempt to back up his claims of support from law enforcement, Toney has racked up endorsements from many of the state’s county sheriffs — including two Democrats, Barron County Sheriff Chris Fitzgerald and Menominee County Sheriff Rebecca Smith. “I don’t think we’ve seen a lot of support from our current attorney general,” Fitzgerald told the Wisconsin Examiner.

Throughout his first term, Kaul has had a strained relationship with some of the sheriffs in the state, most of whom are Republicans.

Emails obtained by the Wisconsin Examiner show that in response to emails from Kaul to county sheriffs honoring the celebration of Law Enforcement Memorial Week in 2021, St. Croix County Sheriff Scott Knudson responded with his complaints about Kaul’s perceived backing of cops across Wisconsin.

“Words and actions speak volumes,” Knudson wrote. “You have not publicly supported law enforcement, or our mission, in recent memory.”

Kaul, meanwhile, has received endorsements from retired Dane County Sheriff David Mahoney, more than 25 current and former mayors, the Professional Firefighters of Wisconsin and a number of county district attorneys, including Republican Buffalo County DA Tom Bilski (who did not return a request for comment).

In the wake of an increase in gun crime across the state, Wisconsin Democrats have raised questions about Toney’s endorsement from the National Rifle Association (NRA) and what he did to get it. Toney, who has never been a legislator and does not have a voting record, received an “A” grade from the gun lobby based on his responses to a candidate questionnaire.

The NRA told the Wisconsin Examiner it doesn’t release copies of the questionnaire and the Toney campaign did not respond to a request for a copy of it. A version of the questionnaire published by a candidate for the U.S. House of Representatives in North Carolina shows that it includes detailed policy questions on topics such as support for the elimination of gun-free zones as well as opposition to mandatory waiting periods to buy firearms and to restrictions on the purchase of ammunition.

On his campaign website, Toney says he’s opposed to red flag laws, which would allow a judge to restrict the right to own a firearm from people who are  a danger to themselves or others.

“These laws serve to restrict people’s lawful right to exercise their constitutional Second Amendment rights,” the website states. “Wisconsin has laws on the books that guarantee due process rights for any firearm restrictions. We can’t legislate our way to safety on this issue and it will only serve to impede law-abiding citizen’s constitutional rights.”

In a statement to the Wisconsin Examiner, Oslund said Toney is putting the NRA over the safety of Wisconsinites.

“While we don’t know what exactly Eric Toney promised the NRA to secure the highest NRA rating he could have gotten, there’s no question that he has put the gun lobby ahead of public safety and common sense,” he said. “Today in Wisconsin, people can sell guns out of the trunk of their cars or online without ever conducting a background check to find out if the buyer is a violent felon or otherwise prohibited from possessing a firearm. AG Josh Kaul opposes this, but Eric Toney is just fine with it.”

The Toney campaign did not respond to a request for comment.