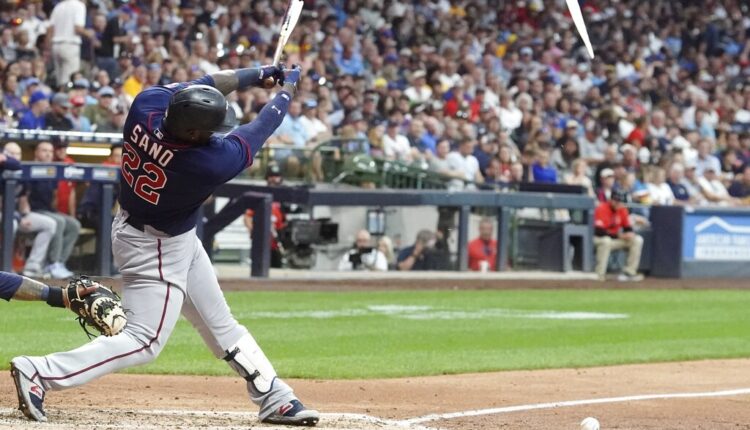 MILWAUKEE — The Twins could do little in the later innings of Tuesday’s game when Brewers manager Craig Counsell handed the ball to a pair of all-star relievers — Devin Williams and Josh Hader — in the eighth and ninth innings.

Twins hitters went down in order in the top half of both innings while Brewers hitters pressured Twins’ relievers in the bottom half of both innings, loading the bases in consecutive frames. Rookie Jhoan Duran bent but didn’t break in the eighth inning before Tyler Duffey gave up the game-winning run in the ninth.

After Duffey allowed a hit and a pair of walks, Luis Urías hit a walk-off sacrifice fly to send the Brewers to a 7-6 win over the Twins on Tuesday night at American Family Field. The run was the first Duffey has given up since July 12.

“They want to get a lead at some point in the sixth, seventh lead and then they turn it over to those guys. And it’s not just reputation,” manager Rocco Baldelli said of the Brewers. “They go out there, you can see it. That’s the kind of game that they play. They bank on winning games like that. We need to do the same.”

Though the Twins bullpen did keep the game close for the final five innings, the loss showed a difference between the two division-leading teams in the late innings when the Brewers got shutdown performances and the Twins had trouble coming upon outs easily. Having a bullpen that can consistently do the same and hold the opposition to zero, Baldelli said, is something the Twins would like to make their “calling card.”

And, he said, he thinks they can get there.

While Baldelli cited relievers stepping up and making adjustments, the most obvious route to improving their bullpen over the course of the next week is through deals ahead of next Tuesday’s trade deadline. Another back-end arm or two would help ease the burden on a bullpen that has been asked to shoulder the fifth-most innings in Major League Baseball and would give the Twins more options late in games to rely on.

Presently, Duran has stepped into the highest-leverage role in the Twins’ bullpen and while he ran into trouble on Tuesday — also issuing two walks and allowing a single — he worked his way out of it by dropping in a perfectly-executed curveball to Willy Adames that the shortstop just looked at to escape the jam.

“The pressure’s always going to be there,” Duran said. “You just have to learn how to deal with it and I’m learning that. I think this is a process.”

Duran had been called upon to keep a game tied that had been knotted up since the fifth inning when, after Gio Urshela hit a three-run shot to give the Twins the lead, Joe Smith surrendered a game-tying blast to Kolten Wong.

Starter Dylan Bundy gave up five runs — four coming in the second inning — pitched in his four innings. Bundy allowed a pair of weak hits before serving up a three-run home run to Hunter Renfroe, which gave the Brewers a 3-1 lead at the time. He gave up another run in the inning — during which the Brewers collected five hits and two walks — and another in the third on a Urías home run.

The game started out on a promising note for the Twins when Byron Buxton, playing in his first game since receiving a platelet-rich plasma injection in his right knee last Wednesday, hit a moonshot out to left-center, his fourth leadoff home run this season. Buxton also doubled in the loss.

But the Twins missed some opportunities — including one in the first inning when they ran themselves out of the frame — before eventually turning the game over to the bullpen and losing late.

“To be a good team and to play well in October, I don’t care who you are talking about, your bullpen has to be a strength,” Baldelli said. “ … We’re going to do everything we possibly can to get to that point where we look up and go, ‘We just absolutely want to turn the ball over.’”