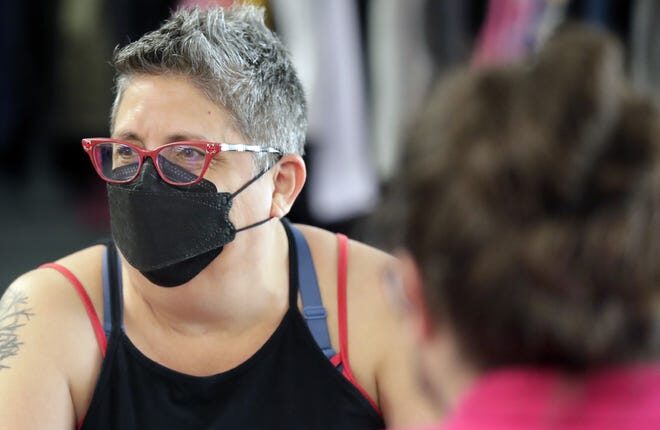 GREEN BAY – A prison guard in Green Bay accused of throwing a woman into a fire and choking her after calling her a homophobic slur has been offered a plea deal that would reduce his charges to misdemeanors and remove hate-crime penalties.

The nature of the crime and the decision to drop hate crime charges have inspired outrage from the victim, her family and the Appleton division of the LGBTQ advocacy group Diverse + Resilient.

According to police reports and witness accounts, on July 3, 2021, Green Bay Correctional Institute officer Shane Nolan called Dessiray Koss a derogatory term for LGBTQ people, threw her into an active fire pit and tried to strangle her when she fought back. Koss is openly gay and was at his private residence at the time of the incident. The attack was sudden and unprovoked, according to Koss and her sister, who said she witnessed the assault.

By July 15, Brown County prosecutors had charged Nolan with one felony charge and one misdemeanor — substantial battery and disorderly conduct, respectively — both with hate crime modifiers that would add nearly seven more years of prison time and thousands of dollars in fines if he was convicted.

Brown County District Attorney David Lasee, the prosecuting attorney in the case, negotiated the plea agreement without Koss’ knowledge, according to Nick Ross, anti-violence program advocate for Diverse + Resilient Appleton. Ahead of the last hearing on Tuesday, Lasee informed Koss that he would change the felony charge to three misdemeanors without hate crime enhancement.

Lasee would not recommend any jail time, Koss was told. Brown County Circuit Court Judge Kendall Kelley will ultimately determine the charges and a sentence if there’s a conviction.

The plea hearing is scheduled for 8:30 am Tuesday at the Brown County Courthouse in room 300.

“This case is already in the criminal justice system. The facts of it include all of the elements of a hate crime,” Ross told the Green Bay Press-Gazette Thursday.

Koss did not want to be interviewed for the story and has allowed anti-violence advocates at Diverse + Resilient Appleton to speak on her behalf.

Koss, 31, suffered severe burns, some of which have required plastic surgery, according to police reports. She is still recovering from first-, second-, and third-degree burns, according to a Tuesday press release by Diverse + Resilient Appleton.

A dispatcher sent Green Bay Police Officer JG Mueller to HSHS St. Mary’s Hospital Medical Center between 5 and 6 am on July 3, 2021, to respond to a disturbance after learning that Koss had been thrown into a fire, according to police reports.

With Koss’ permission, Mueller photographed the injuries, which required hospital staff to remove plastic bandaging from her left arm.

“It was apparent that Dessiray was in a considerable amount of pain,” Mueller’s report from the evening reads. In addition to Koss’ bandaged arm, Mueller noted her hands were covered in a black substance that looked like ash.

According to Koss’ victim statement, she was at her home in Green Bay at 3 on July 3, 2021, when her sister and female friend came over with two men whom her sister and sister’s friend met while bar hopping. Koss was introduced to two men named Matt and Nolan.

Shane Nolan referred to himself by his last name, according to the police report, which Mueller noted is a common habit used by those who “work in a pseudo-military occupation.”

Koss invited her sister, her sister’s friend and the two men to join her around her fire pit and offered everyone beer. At some point, everyone but Nolan and Koss went inside to use the bathroom. She offered Nolan another beer, which he took. Then, unprompted, he stood up, called her a homophobic slur, grabbed her by the torso from her chair and threw her into the lighted fire pit, according to the criminal complaint.

After she crawled out of the fire, she fought back against Nolan, loud enough to draw the attention of everybody inside, according to the criminal complaint.

Koss’ sister, who told officers she saw the attack, quickly intervened. As Nolan repeated the homophobic slur, Koss’ sister pushed Nolan to the ground and began punching him in the head to subdue him, according to Green Bay Officer Z. Cantie’s report.

Nolan pushed off Koss’ sister and lunged for Koss’ throat, according to her sister’s account. Nolan squeezed Koss’ neck, appearing to use all his force, she said. She watched his complexion change to purple while he strangled her sister.

An unidentified neighbor assisted Koss’ sister and her friend in removing Nolan. At this point, Nolan wandered off, separated from his friend Matt, according to police reports. That’s when the women helped to get Koss to the hospital to treat her severe burns.

Officer Mueller later identified Nolan, 31, as a suspect who matched the description of an employee with the Green Bay Correctional Institute. He hadn’t shown up for his shift the next morning or called in, according to police reports. Officers attempted to reach him by phone and at his home, but he was unreachable.

According to police reports, Koss identified Nolan in a photo lineup the next day, July 4. Once he learned police were looking for him, Nolan went willingly to the Green Bay Police Department.

Nolan claimed he drank too much, blacked out and woke to being physically assaulted, according to a police report. He denied calling Koss any type of slur, stating that it is neither his character nor a term you ever want to utter in his line of work.

According to a spokesperson from the state Department of Corrections, employees charged with felonies are typically placed on unpaid leave. It was unclear late Thursday whether Nolan remains employed by the state prison system.

Upon reviewing Koss’ written statement, Mueller recommended both substantial battery and disorderly conduct be modified to include the hate crime enhancer.

Hate crimes in the LGBTQ community are underreported, advocates say

Under Wisconsin law, prosecutors may add this additional penalty if the crime is deemed to be motivated by hate. That modifier means the defendant could receive additional penalties beyond the maximum of the base crime.

Instead, he may face a series of misdemeanor fines and no jail time, according to Ross.

Kathy Flores, the anti-violence program director at Diverse + Resilient Appleton, suspects that the hate crime charges were dropped because it would mean a “sure verdict” for the prosecuting attorney.

“A sure verdict is almost always the case when it comes to hate crimes in the LGBTQ community,” Flores said. “The reason we are pushing for this is because it’s what the victim’s family wants. We don’t trust the criminal justice system to do the right thing.”

Because Nolan is connected to local law enforcement, Flores said it’s hard not to be cynical about why a Brown County prosecutor is going lighter on the defendant.

“In this case, it feels like the call is coming from inside the house,” Flores said.

Lasee’s office did not respond to a message from the Press-Gazette.

Flores said nowhere is considered safe for the LGBTQ community, but it’s especially so in northeast Wisconsin. Over the last year of working with Appleton-based clients, Flores said the organization has served about 150 people, a majority of whom are victims of hate violence.

In a majority of those cases, victims do not report to the police. And for those who do report, it’s hard for such enhancements to “stick,” said Flores.

Ross said when they spoke to Koss, she expressed profound disappointment when Lasee informed her by phone of the plea agreement. Ross said she was provided no further explanation as to why the hate crime enhancers were dropped.

Flores and Ross both hope the outcomes of the plea hearing will give justice to Koss. They also want to ensure that Nolan is barred from supervising incarcerated people and any other job involving the criminal justice system.

“The thing that I keep thinking about is how (Koss) believed in the system, that she would get justice from the system, because that’s what we’re taught,” Ross said. “But those systems weren’t built for LGBTQ people in mind.”

Natalie Eilbert covers mental health issues for USA TODAY NETWORK-CENTRAL WISCONSIN. She welcomes story tips and feedback. You can reach her at [email protected] or view her Twitter profile at @natalie_eilbert. If you or someone you know is dealing with suicidal thoughts, call the National Suicide Prevention Lifeline at 800-273-8255 or text “Hopeline” to the National Crisis Text Line at 741-741.