Bucks Week Ahead: Steering Into the Skid 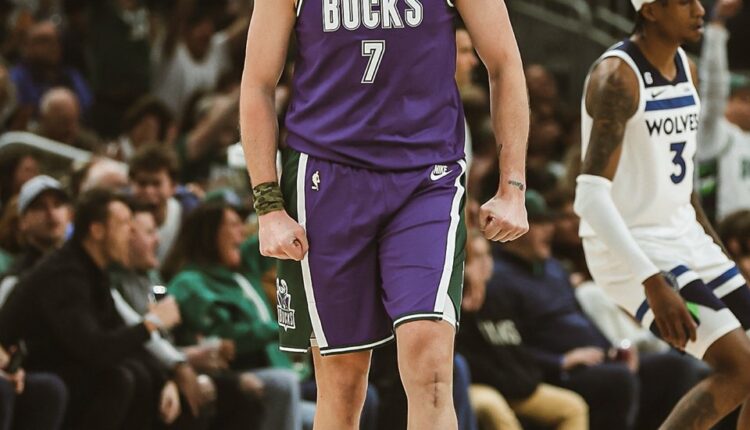 It was a tale of two halves for the Milwaukee Bucks on Friday night, in their last regular season game of the 2022 calendar year. Three-point shooting had been a problem for the Bucks, especially without outside shooting from Khris Middleton and Jrue Holiday, who are both currently out with injuries. The Bucks felt it against the Minnesota Timberwolves, making just two of 22 three-point attempts in the first half. That echoed the struggles of the last four games for Milwaukee, in which they shot just 30% from three-point territory, making 44 of 147 three-point attempts.

While it looked like Milwaukee would once again struggle from deep, the second half made the Bucks look like a completely different shooting team, as the entire lineup suddenly got hot from behind the arc. A barrage of three-pointers contributed to a 39-point third quarter for Milwaukee, and ultimately would be the difference as the Bucks pulled away from the Timberwolves. Coming into this week, the Bucks rank just 23rd in the NBA in field goal percentage, and are in dire need of a consistent outside shooter. Thankfully, Friday night’s win snapped a four-game losing streak, but Milwaukee’s lineup suffered from injuries to the entire big three for the Bucks plus key roleplayers in a loss on Sunday night. Here is what is in store for the team this week.

The week begins for the Bucks at Fiserv Forum, with the second of two games against the Washington Wizards. Washington came into the first of two games on Sunday with a four-game win streak, thanks to an offense that is beginning to turn things around. The Wizards’ attack is centered around Kristaps Porzingis, who has been a much-needed addition to Washington since being acquired from the New York Knicks. With the status of guard Bradley Beal and forward Taj Gibson up in the air, Porzingis had to carry the load for the Wizards as of late, along with forward Kyle Kuzma. On the right night, the Wizards can put together a strong showing, but they have a long way to go in order to make up from a recent losing streak. With Milwaukee’s stars all hampered by injury as well, anything could happen on Tuesday night.

A short Canadian road trip mid-week will see the Bucks face the Toronto Raptors for the first time this season. Toronto comes into the week winning just three of their last 11 contests, with losses to some objectively bad teams in the early-going of the season. Forward Pascal Siakam is the star of the show for the Raptors so far this season, averaging 26.5 points per game and leading the team in rebounds, assists and steals as well. With a solid supporting cast around Siakam and little rest with travel to Milwaukee, the Bucks will have their work cut out for them on Wednesday. Fortunately, Milwaukee has won four of their last five games against the Raptors in Toronto over the past five seasons.

The week wraps up for Milwaukee back at home, taking on the Charlotte Hornets at Fiserv Forum. This is the second meeting of the teams this season, with Milwaukee securing a 105-96 win last time around. They did so without Giannis, who was out with the left knee soreness that has kept him sidelined for much of this season so far. In his place, Bobby Portis stole the show, racking up 20 points and leading the team in rebounds and assists that night. Portis has been in fine form as of late for Milwaukee, while Charlotte is sitting near the bottom of the Eastern Conference standing with the second worst record in the NBA coming into the week. If a repeat performance is in order, hopefully a lively Fiserv Forum crowd can push the Bucks over the edge on Friday.

Allen Halas is a life-long Milwaukeean, and has been in and around local music for over 15 years. He is an avid Milwaukee Bucks follower, and general supporter of all that the city has to offer. Find him on social media: @AllenHalas.