Chefs from around the world use knives made by Milwaukee bladesmith 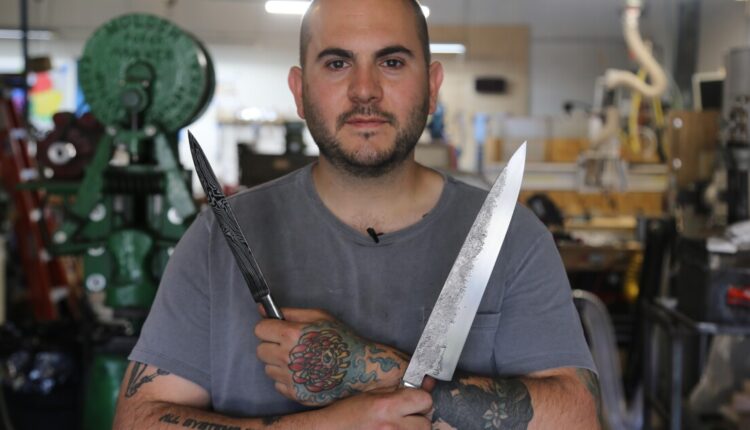 MILWAUKEE — Chefs from all around the world use knives made by a Milwaukee man. Nathan Zimmerman, a 31-year-old bladesmith from Milwaukee, makes some of the finest cutlery you will ever see or use.

“Not really a job. It’s more like a pursuit of craft or a pursuit of like excellence or just getting the crazy ideas that I have in my head out in 3D object,” Zimmerman said.

For the past five or so years, he has been making knives and swords in his studio off of East Capitol Drive in Milwaukee. However, he was making knives long before he moved into his studio. Zimmerman smithed blades for years just as a hobby before making it into a business.

One of Zimmerman’s knives that he makes. It may take a few days to months to make just one knife.

His passion for knives started as a child. It was a combination of his love for all things fantasy like board games, video games, and movies, plus his love for cooking.

For him, it’s the continuation of a long historical tradition of tool making. 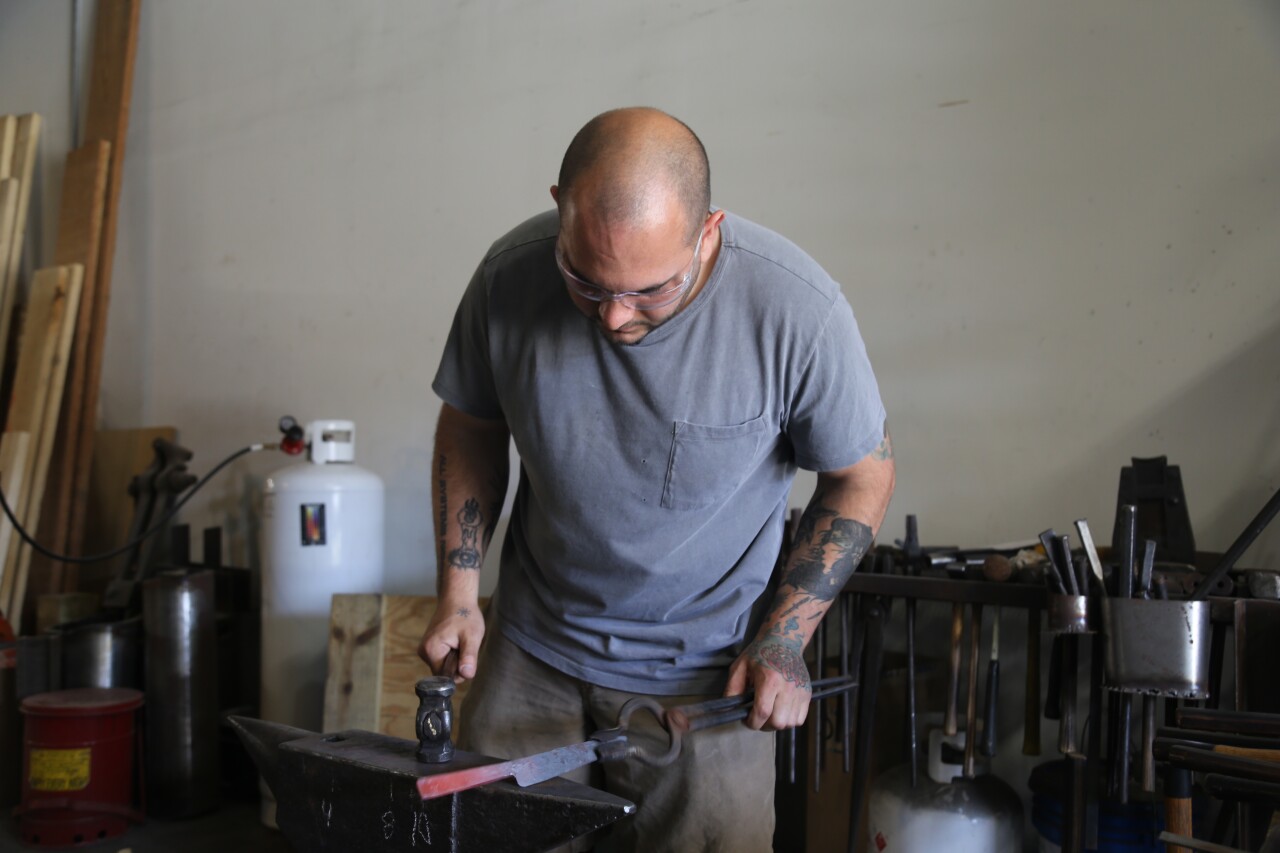 Zimmerman works on a small blade in his studio on E. Abert Place in Milwaukee.

“I’m still heating up a piece of steel and hammering it to shape on a lump of other steel with a lump of steel in my hand. It’s the same basic process that people have been doing for thousands and thousands of years, and it’s very fun and very satisfying.”

On his website, one knife set, which includes a knife, cutting fork, and board, costs $1,420. There are cheaper options, though which can run in the few hundred dollar range.

“I think my knives are so great because they cut better than any production knife on the market,” he said. 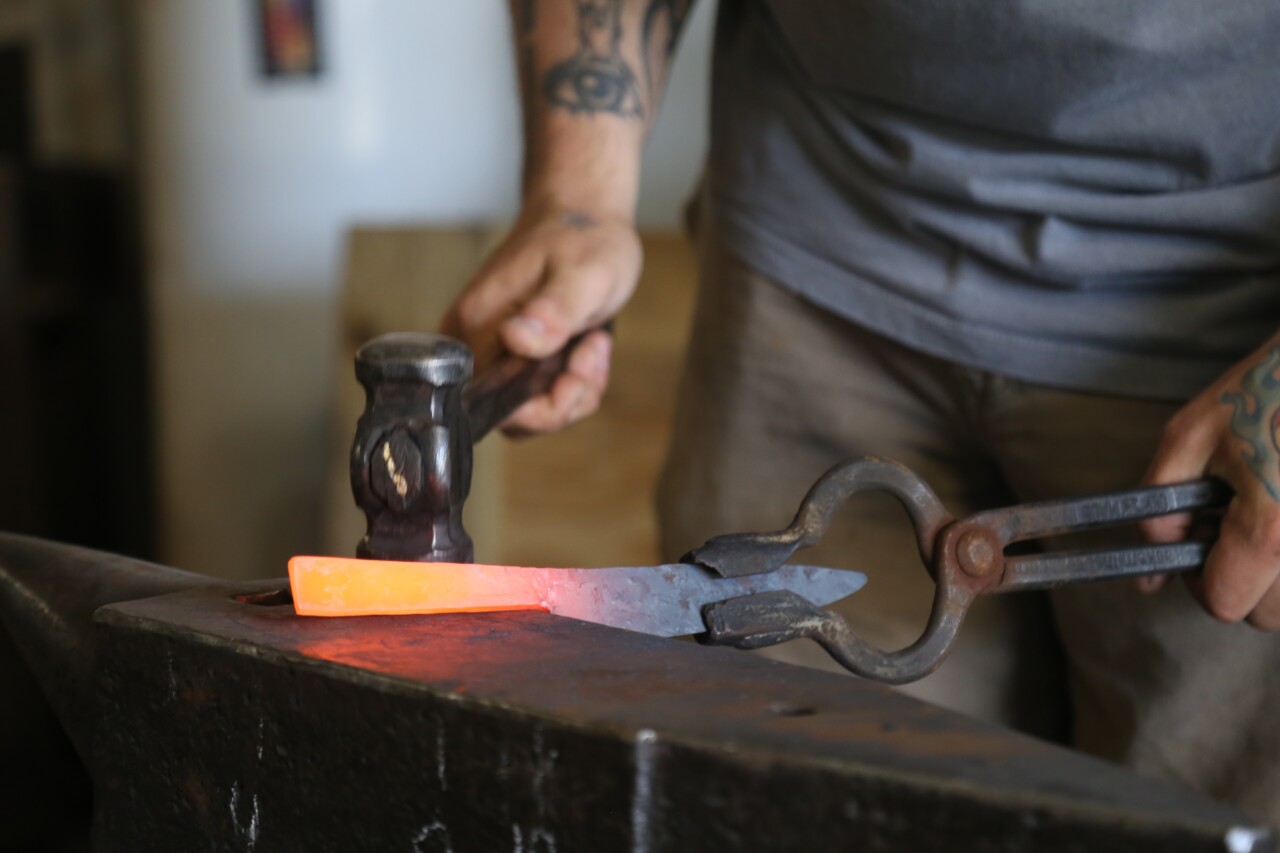 Hammering the handle of a blade.

For custom knives, he has four tiers which are $75/inch, $100/inch, $150/inch, and the final and nicest of his custom pieces have to be given individual quotes given the level of complexity.

“When you don’t have to make a piece that is functional necessarily, you can make some really fun shapes and curves and lines and colors,” Zimmerman said about his custom pieces.

However, bladesmithing isn’t his main source of income. Zimmerman also works with the The Sharp Brothers, which sharpens knives, blades, and other sharp tools. Zimmerman goes to the Waukesha and Greenfield farmer’s markets every weekend to offer blade sharpening.

“The sharpening is how I fund my knife making addiction. It certainly brings in more money than the knife making,” he said.

It’s knives that are his true passion, though. He’d like more people to appreciate the craftsmanship of a well made blade and transition from cutlery bought at Target to something nicer. His knives are in restaurants like Sanford and Eagle Park Brewing in Milwaukee. He has also shipped knives across the country and world.