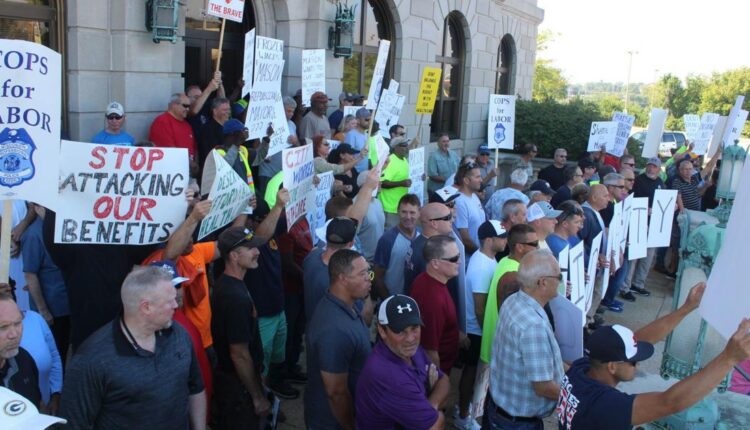 RACINE – In the ongoing negotiations between the city and the Racine Police Association, the primary block to an agreement largely comes down to benefits.

There is not that much distance between the wage increases being offered by the city and the increases the union is seeking. However, the union wants to retain retirement and health benefits the city has discontinued for other city staff due to budget constraints.

The union wants a three-year contract with a 3% increase for every year.

As seen here, the primary difference between the Racine Police Association and the City of Racine in contract talks is not wages, but rather benefits, as the city’s offer on wages has little difference to what the union is seeking.


Since the last-agreed upon contract expired at the end of 2020, and no new contracts have been approved, the union and city have been operating as if the contract that ended nearly two years ago was still in effect. Approving a contract for 2021-22 could lead to backpay for officers.

The sticking point is the union does not want any changes to the health insurance or retirement plans, which the city has already eliminated for its non-represented employees.

The city attests that it is not legally allowed to negotiate those benefits with the union due to changes to state law made a decade ago under Act 10 and other related public union-busting legislation. A state union representative — Jim Palmer, executive director of the Wisconsin Professional Police Association — responded, telling The Journal Times earlier this month that even if what the city has been doing is legal, no other Wisconsin municipality has cut benefits for unionized police officers in this way.

The city’s most recent offer to the Racine Police Association includes the stipulation that the union drop its appeal in a court case challenging how the city lessened unionized officers’ and firefighters’ benefits.

The Wisconsin Professional Police Association provided The Journal Times with the proposals the Racine Police Association and the City of Racine have made in contract negotiations. The RPA’s offer is dated Nov. 18, 2020, and takes up only about half of a page and only details requested wage increases. The city’s most recent offer, dated Oct. 5, 2022, is nearly three pages long and details 10 stipulations ranging from student loan repayment assistance to paid parental leave to an additional paid holiday.

To review the yourself, find this story online at JournalTimes.com or go to bit.ly/3D6caBp

The city and police association initially tried to negotiate a new contract in 2020 but discussions broke down over changes to retirement benefits the city claimed were necessary to balance the budget.

The union claimed the changes should have been brought to the table during contract negotiations. The city claimed state law, specifically resulting from Act 10 and other union-busting legislation passed a decade ago under then-Gov. Scott Walker, prohibited municipalities from negotiating those elements of a union contract.

Both sides agreed in early 2021 to put the issue before the Wisconsin Employment Relations Commission, which sided with the city in a decision issued in July 2022. The union is appealing that decision in a case that includes the union of the Racine Fire Department, AFL -CIO International Association of Firefighters, Local 321. The case was filed in Dane County Circuit Court.

The changes to benefits were made by the Racine Common Council in 2020 over heavy protests from city employees and retirees.

Due to constantly increasing health care costs, the City Council made the following changes for the city’s unrepresented employees:

The city’s negotiations with the police and fire unions intended to bring their health and retirement benefits to be more similar to the benefits the non-represented employees receive.

For the unions, those changes are not on the table.

After Act 10, 20 and 32 were passed a decade ago, the only element of the health insurance public safety unions could negotiate in Wisconsin was the premium share; that is, what an employee paid toward health insurance.

As part of their negotiations, the city has offered a payroll deduction of 7.5% of the health insurance premium, the same as non-represented city employees.

Additionally, the city wants to remove from the contract those elements that are now prohibited subjects of bargaining by state law. They would then put the plan design in the department’s handbook since those elements are no longer subject to bargaining.

Under the city’s proposal that the union rejected, the city indicated it wants to cap and phase-out the sick leave cash payout. Right now, retirees receive a payout equal to 50% of their accumulated unused sick time, with a maximum of 140 days; the city wants to end that within four years. The city proposed as follows:

These sick leave payouts have been expensive for the city. According to City Administrator Paul Vornholt, the city made seven such payouts this year through the end of September with the average payout equaling $19,000 for a total of $133,000.

If no agreement is come to within the next month-and-a-half, Racine Police officers will be entering their third year without a current contract and their wages will continue falling further behind other area departments.

As part of the proffered offer, the city would also extend to its officers benefits already offered to non-represented city employees:

In photos: City employees call out mayor during protest of cost-saving health care changes in September 2019

Employees from various City of Racine departments, from fire to police to parks to public works, stood side-by-side in protest of proposed changes to their health care plans.


Marching outside of City Hall

Racine city employees organize a protest outside of City Hall on Monday to express their frustration with a proposal to increase health care costs.


‘At least Palenick will get a raise’


‘Stop spending save my health care’

José Carbajal, second from left, is the president of Local 321, the local firefighters’ union. He held a sign reading “Stop attacking our benefits” on Sept. 16, 2019, in front of City Hall, protesting proposed changes to health care benefits for all of Racine’s public employees.


Protesting at the roundabout

Racine city employees organize a protest outside of City Hall on Monday to express their frustration with a proposal to increase health care costs.

Racine city employees organize a protest outside of City Hall on Monday to express their frustration with a proposal to increase health care costs. On Tuesday, the City Council deferred making a decision on the health care cuts.

Racine city employees organize a protest outside of City Hall on Monday, Sept. 16, 2019, to express their frustration with a proposal to increase health care costs.

Wisconsin’s Could Be Biggest Gubernatorial Race In The Country