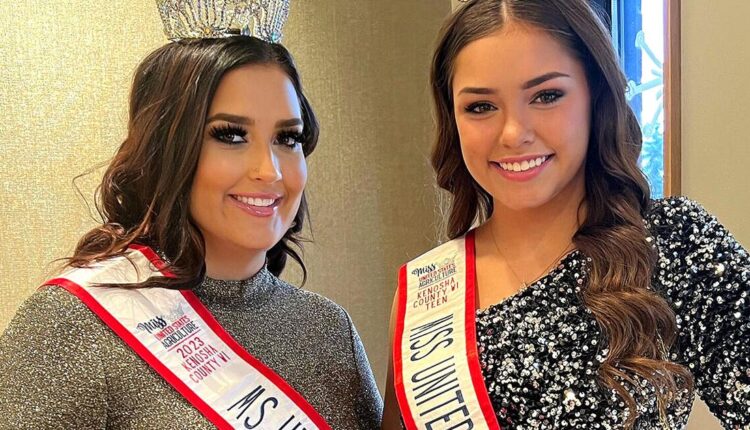 They will be representing Kenosha County in the 2022 Wisconsin Miss United States Agriculture pageant Saturday in Faribault, Minn.

Before competing together, the two girls met each other through being involved in 4-H.

They are not new to the world of pageantry.

Armbruster, who currently holds the title of Miss Kenosha County, has been competing in pageants since she was 3. She took a hiatus from competing until Eisenbraun and her mother, Nikki, convinced her to get back into pageantry.

“Over the last year, Paige got back into pageants and when the Miss United States Agriculture had another photo contest, I thought it was a great opportunity for Paige to join Jadyn promoting something they both love,” Nikki Eisenbraun said. “I entered Paige’s photo, and a few weeks later we found out she won.”

Jadyn Eisenbraun started competing in pageants in 2020 when she entered in a Sunburst Beauty Pageant, a program in which she remains involved.

“When I saw the photo contest on Facebook to win your local Miss United States Agriculture title, we entered it knowing that would give her the opportunity to compete at the state level and meet like-minded girls,” Nikki Eisenbraun said. “She won the contest for her age division which awarded her the county title and the opportunity to go to the state pageant.”

Saturday’s pageant will include categories such as formal wear, interview, onstage questions and introduction.

Preparation for the pageant ranges from beautification to preparing for onstage questioning.

“I’ve been preparing for like the last week so obviously (part of it is) making yourself pretty,” Armbruster said. “So nails, hair, lashes, getting your dresses and all your outfits that you have to wear and making sure they all fit and they’re all steamed, and then just really preparing yourself for onstage questions and practicing walking.”

The hardest part of the competition, Jadyn Eisenbraun said, is being ready for the on-stage competition.

“The hardest part is definitely just being mentally ready to go on stage and talk in front of people,” Jadyn Eisenbraun said. “The hardest part about competing is just keeping it calm and not freaking out all the time.”

Winner takes it all

If the girls win each of their titles, they will have an opportunity to compete at the national level, as well as scholarship money.

“Right now we’re collecting donations for the Minnesota food shelters, food banks. Anyone that brings the most non perishable food items in can win the People’s Choice Award and receives a scholarship,” Armbruster said. “So we’re trying to bring the most food items from Kenosha County.”

Unlike what is shown on reality shows, such as “Toddlers and Tiaras,” Jadyn Eisenbraun said most young kids enjoy competing, and it’s less of an individual competition.

“They’re not angry and I don’t think they fight back with their parents,” Jadyn Eisenbraun said. “And it’s just more like a family thing than an individual thing. So once you win a title, it doesn’t really matter what the title it is, you automatically have a family anywhere because we both have a lot of friends that have different titles.”

Armbruster said she is often asked if the pageants are beauty pageants.

“It’s not a beauty pageant, but we do prepare with hair, makeup, nails and other things like that, and that’s more of a confidence booster,” Armbruster said. “Personally, it makes me feel like I’m more confident on stage with all of that done. It’s not a requirement for the pageant, though.”

Given their ties to 4-H, both girls are advocates for agriculture.

Armbruster, who has moved from Bristol to Kenosha, said Saturday’s pageant is an opportunity to expand her platform of promoting agriculture to children who live in non-rural areas.

“I come from an agricultural background. I do live in the city now, so my platform is promoting agriculture in the city for kids that don’t know a lot about it,” Armbruster said. “That’s why it’s big to me, because I do want to promote that platform and where crops and stuff go and how dairy farmers help in Wisconsin.”

When Jadyn Eisenbraun is not prepping or competing in pageants, she coaches basketball at Salem Grade School and gets involved in the Central High School Theater Department and brand.

“I recently retired from playing sports due to a lot of injuries, so I’ve taken a step back with the athletic department,” Jadyn Eisenbraun said. “But I have definitely been more active in drama club, the band program and I’m also really active in 4-H.”

She was 4H president for two years before switching to a role in leading community service, is the 4-H ambassador for the 4-H Council Board and is the junior leader of the Dairy Goat Project.

Armbruster, who is a Central High School alumna, is the operations manager at Tropical Tan, overseeing eight locations including sites as far as Palatine, Ill. and as close as Kenosha.

When she was in 4-H, Armbruster entered in events ranging from photography to showing animals.

“I was active in the pork project, archery project, quilting, photography, food, baking, vegetables (and) anything and everything,” Armbruster. “I can’t physically show animals or sell animals at the fair, but I can help the younger kids, which I do, and get them ready for showing on sale day, helping them walk and helping them properly feed their animals.”

Both girls said they are thankful for their sponsors for helping them get this far.

“We want to make Kenosha proud and bring home two titles,” Jadyn Eisenbraun said. “And we’re hoping to compete at nationals together next year.”

IN PHOTOS: Check out the images as thousands attend Kenosha’s Lightin’ Up celebration Downtown

Patrons turn to view the lit Christmas tree during the Lightin’ Up celebration Downtown on Friday.

President of the City Council Rocco LaMacchia, left, Santa Claus, center, and Mrs. Claus reach to light the city’s Christmas tree during the Lightin’ Up celebration Downtown on Friday, Nov. 25, 2022.

Miss Kenosha 2022 Jenna Zeihen sings with children on the stage during the Lightin’ Up celebration Downtown on Friday.

Santa Claus makes his way to the stage at Fountain Plaza, west of the Kenosha Public Museum, during the Lightin’ Up celebration Downtown on Friday. Thousands of area residents descended upon Downtown Kenosha to witness the lighting of the city’s 35-foot-tall Christmas tree and enjoy the high-energy holiday festivities during the annual celebration Friday evening.

A group gathers to light the Christmas tree in Friendship Park during the Lightin’ Up celebration Downtown on Friday.

Dan Cunegin sells holiday toys during the Lightin’ Up celebration Downtown on Friday,.

Miss Kenosha 2022 Jenna Zeihen sings during the Lightin’ Up celebration Downtown on Friday.

Remy LeRoy, 7, left, and her brother Kellen, 3, right, talk with Santa at the Rhode Center for the Arts during the Lightin’ Up celebration Downtown on Friday evening.

Those Funny Little People entertain the crowd during the Lightin’ Up celebration Downtown on Friday, Nov. 25, 2022.

One of the members of Those Funny Little People, left, says hello to Hazel Beutner, 1, and her mom, Ariel, during the Lightin’ Up celebration Downtown on Friday.

Josiah Gibson, 2, and his grandmother, Kimberly Dill, sing and dance along to the Harmonix during the Lightin’ Up celebration Downtown on Friday.

Kenosha St. Joe’s off to hot start behind mix of experience and youth