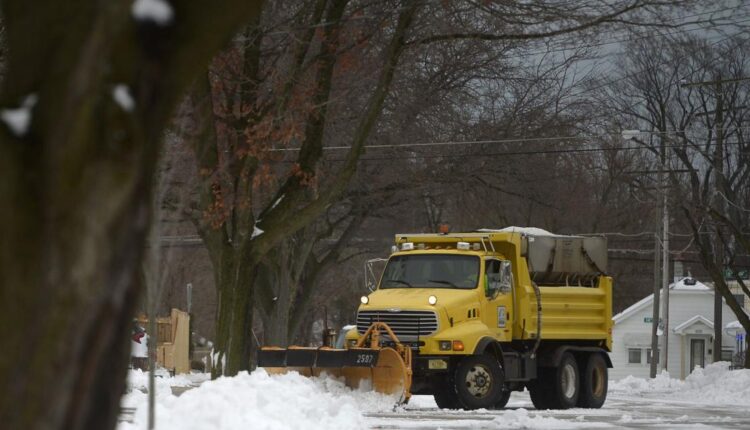 The city of Kenosha has asked all citizens to help keep streets and sidewalks clean and safe in the winter months ahead. Citizens can help by following parking regulations during a Declared Snow Emergency.

As posted snow route regulations explain, after 2 inches of snow have fallen, parking is prohibited in areas where snow routes are posted with road signs. Violators are subject to a fine, and their vehicles could be towed.

Yellowstone National Park’s magnificent winters are dwindling as the planet warms. Billings Gazette reporter Emily Schabacker and photographer Mike Clark toured the park by snowmobile to witness its geysers and wildlife in the winter, and to learn about how the landscape is changing.

The city may declare a snow emergency during severe winter weather conditions, usually when 4 inches or more of snow is anticipated, has fallen or when snow is causing hazardous driving conditions. The city provides notice at least two hours prior to the enforcement of snow emergencies. This is designed to allow motorists sufficient time to remove their vehicles from the roadway.

In the event of a snow emergency, parking is prohibited on all city streets. However, the city will allow overnight parking in designated downtown and uptown city parking lots to ease the burden of finding parking during declared snow emergencies.

The city notifies the public of snow emergencies through the local media, WLIP 1050 AM and Channel 25 on Spectrum Cable. The emergency will also be posted on Kenoshanews.com and the Kenosha New Facebook page.

In addition, snow emergencies will be posted as a banner on the City’s web site: www.kenosha.org and through City social media: Twitter, (@City_of_Kenosha) Instagram and the Kenosha Police Department’s Facebook page and through the City’s mass notification system, AlertSense.

The City also provides updates of current parking restrictions on a 24-hour hotline 262-653-4074. To find posted snow route regulations, snow emergency parking lots and for more information, visit kenosha.org/departments/public-works/seasonal-operations or pick up a free copy of the City Snow & Ice Control Guide at the City of Kenosha Department of Public Works or call 262-653-4070 between 7 am and 3 pm

The winners of the 2022 US National Snow Sculpting Championship are…

team name: Sculptora Borealis (Wisconsin 1) Sculpture Title: Deeper Connections Artist statement: Against the many storylines that exist today, whether it’s political, racial, cultural, religious, etc., the media narrative continuously places humans into groups or uses descriptors that try to push people into some sort of category often creating division and tension between those groups . Whatever the motive, in the end, we are all humans and our opinions and what we look like on the outside are just a small part of who we are as a person. The deeper we dig into understanding our fellow humans, we’ll find that we have much in common, and if you remain open, you just might find a connection that would not have otherwise been found. It is time for us to reach out and understand each other so we can unify the world and create compassion, and acceptance for all beings on Earth. Team Members: Joshua Jakubowski (captain), Robert Lechtenberg, Michael Lechtenberg.

team name: Flozen: Less Latitude, More Attitude (Florida) Sculpture Title: Cherry Blossom Beauty Artist statement: The meaning of this sculpture holds an important significance to Team Flozen. Over the past year, countless people around us have suffered losses, struggled with anxiety, and have endured tremendous life-aging circumstances. Our world seems to have a dark shadow cast upon it. We wanted our piece to illustrate the beauty that still exists in this world. It’s our hope to transport everyone into a place of peace and serenity, where troubles are no more than a cherry blossom falling from a tree. Team Members: Amanda Bolduc (captain), Bruce Peck, Adam Turner.

team name: Jay Ray w/SnoKraft (North Dakota) Sculpture Title: Here, There Be Dragons Artist statement: Viking long ships and their stylized figure heads struck fear into the hearts of coastal dwellers in medieval northern Europe. The long agile ships were fast and capable of sailing oceans and rivers alike. These ships were so well made, that they were capable of crossing oceans to lands unknown. Fearsome and fearless, the Vikings sailed into the unknown, regardless of what might be there to greet them. The snow carving titled “Here, There Be Dragons” features a Viking long ship in its final moments above the waves as it is being ravaged by a monstrous sea dragon. Featuring the Viking ship is an homage to the “Hjemkomst Viking Ship Park” where team North Dakota met in friendly competition at the annual Frostival Snow Carving Competition. Team Members: Jay Ray (captain), Mike Nelson, Josh Zeis.

team name: Urban country men (New York 1) Sculpture Title: Screwed Artist statement: The sculpture titled “Screwed” is a design that was first thought of by artist Alan Tuttle. He had brought the idea to our team discussions and after many other ideas passed by, the idea of ​​the screw passing through wood seemed like the most viable option for our team. It offers the challenge that we are looking for as sculptors, as well as an interesting concept for the viewers. This sculpture has a double helix screw body, hollowed from the core with a giant Philips screw head protruding from a diagonal piece of wood. As a screw is driven into wood it creates a draw through tension and stress. In our society today tension and stress are two areas that we can all relate to in our own way. The name given to the sculpture is obviously a pun and meant to be funny. It is a name that no one will pass by without wonder. This idea in all seriousness, offers some great technical challenges that we will overcome. Our journey has brought us back together to sculpt snow after a long break. We are excited to create and celebrate a form of art that so many have spent countless hours thinking, planning and executing all to watch it melt back into the ground in a short time. We are the urban countrymen from the state of New York and we are excited to experience this event alongside so many other talented people. Thank you for all that make this event happen. Team Members: Paul Aubin (captain), Alan Tuttle, Johnny Church.

A painted snow sculpture of a bonfire is stationed on Riviera Beach as part of Bonfires on the Beach.

With the cold February temperatures, people stay warm by one of the bonfires.

A group of people relax by one of the bonfires on Riviera Beach.

Bonfires on the Beach offered heated snow globes and tents where people could stay warm, relax and enjoy some food.

Queen Bee Artisan Market, located inside the Market of Lake Geneva, has an ice sculpture of a queen bee– of course.


Be the first to know