Community and labor organizations speak against voter suppression in Milwaukee 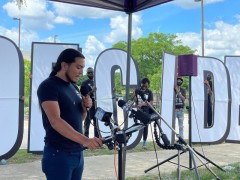 Alan Chavoya, Outreach Chair for the Milwaukee Alliance, calls for people to fight back in the democratic struggle for voting rights at an event in Milwaukee. (Fight Back! News/staff)

Milwaukee, WI – On July 26, the Milwaukee Alliance Against Racist and Political Repression and Reproductive Justice Action Milwaukee joined SEIU Wisconsin for an event to speak against voter suppression. Early voting for the partisan primary kicked off on Tuesday in Milwaukee, and while many speakers emphasized the need to vote, the Milwaukee Alliance and RJAM kept their messages focused on the fight for voting rights. This is important, as our voting rights, especially those of oppressed nationalities, are coming under deeper and more frequent attacks.

Lauren Forbush, chair of RJAM, drew connections between the attacks on reproductive rights and the attacks on voting rights, stating, “With the reinstatement of Wisconsin State Statute 940.04, abortion providers can face a Class H felony and a $10,000 fine. You know what people with felonies can’t do? Vote!”

Now, more than ever, it’s imperative to shed light on how these issues in order to build stronger alliances and fight back, and fighting back is exactly what Alan Chavoya, outreach chair of the Milwaukee Alliance, encouraged as he spoke at the event.

“We all know that the fight against voter suppression in this country is a struggle that spread across the entire history of the US But, like during any other time in history, when working people’s right to vote is under attack, what do we do? We stand up and fight back.” Chavoya said.

Chavoya highlighted the need for organized labor and grassroots movements in Milwaukee to come together and build political power. Chavoya called attention to the impressive work being done in Chicago to foster unity between movements in the community and in labor to fight for greater democratic rights.

“The partnership between SEIU, other unions, and the Chicago chapter of the Alliance is what made it possible for them to pass the most progressive police reform in this country and are one step closer to getting community control of the police.”

The Milwaukee Alliance and RJAM are continuing to build the struggle in Milwaukee against racist, sexist, transphobic and political repression. Through these kinds of events, the alliance between these organizations and unions like SEIU grows stronger, setting the stage for future victories in Milwaukee.