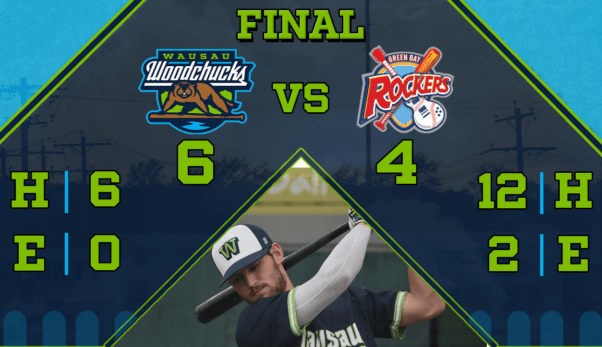 Conway (North Georgia) totaled his first five RBI of the season in the win, erasing an early 1-0 deficit with an RBI groundout to plate Michael Brooks (UCF) in the second inning.

Brooks would start the rally in the fourth, leading off the inning with a ground-rule double. A bunt single by Amani Larry (New Orleans) loaded the bases for Conway, whose no-doubter to left field put the Woodchucks in front 5-1.

Mark Shallenberger (Evansville) would extend both the lead and his on-base streak with an RBI single later in the inning. He has reached base in all 16 of his games this summer.

The Rockers would only score two runs off Woodchucks starter Jack Wenninger (Illinois), who struck out a season-high six batters over four-plus innings.

Andrew Armstrong (Florida State) would pitch around some trouble in the seventh and eighth, allowing two runs. He was lifted by the leaping catch of Dwight Allen (Georgia) in the left field corner, robbing Brendan Ryan of extra bases and an RBI. An inning-ending double play turned by Larry would strand the tying run on base in the eighth.

Skipper Corey Thompson then turned to Cade Denton (Oral Roberts), who made it a perfect 2-for-2 in save opportunities this summer.

The Woodchucks improved to 12-13 with a win, moving them into a tie for second place in the Great Lakes West Division. They snapped a four-game stretch of road losses and have now won two in a row.

Wausau will host Green Bay on Friday starting at 6:35 pm at Athletic Park. A fireworks show, sponsored by Festival Foods, will follow the contest.