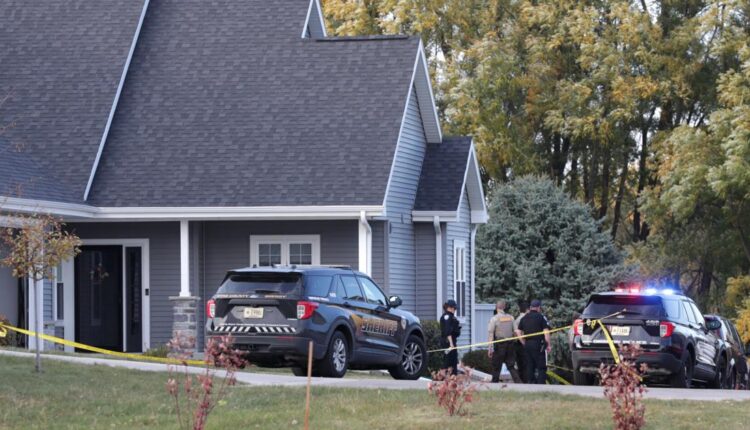 A person suspected of committing “several weapons violations” in recent days was shot and killed by a Dane County Sheriff’s deputy Sunday afternoon in the village of Oregon, authorities said.

At about 11 am, the Dane County Sheriff’s Office received a 911 call about a weapons violation on Jefferson Street in Oregon, and deputies and assisting agencies began “actively” searching for a suspect in the area, Sheriff Kalvin Barrett said.

The suspect, who was alleged to have committed “several weapons violations” in recent days, was believed to be in the 5200 block of County Road CC, according to the Wisconsin Department of Justice, which released more details on the incident late Sunday.

Authorities block off portions of a neighborhood Sunday afternoon in the village of Oregon, where a Dane County Sheriff’s deputy shot and killed a person alleged to have committed several weapons violations in recent days, according to the Wisconsin Department of Justice.


Officials set up a perimeter in the area, and the suspect fled on foot, the DOJ said. A deputy made contact with the suspect at about 3:15 pm and fired at the person who died at the scene.

Authorities had not released the name of the person killed or the deputy, who has been placed on leave while the DOJ investigates the shooting.

A firearm was located at the scene, the DOJ said.

Barrett took no questions at a briefing outside a nearby church just after 7 pm, and said the DOJ’s Division of Criminal Investigations would be releasing additional information.

The name of the person killed will be released by the Dane County Medical Examiner’s Office after family is notified, Barrett said.

Police were still on the scene late Sunday.

Just after 4:30 pm Sunday, police tape and squad cars were seen blocking off a neighborhood in Oregon.

Law enforcement on the scene of an incident Sunday afternoon in the village of Oregon.


The incident appeared to have occurred near a cul-de-sac just off the 200 block of Bergamont Boulevard. Police tape and squad cars were seen through the area, and police had blocked off the entrance to the neighborhood at Eagle Drive, and also had officers stationed along Jefferson Street, on the other side of the property.

A white tent could be seen in the backyard of the residences.

Several residents stood outside their homes on Eagle Drive while police worked to contain the scene. One family still had the Packers game playing on a TV in their garage while they observed the scene. Other neighbors in the blocks beyond the incident had emerged from their homes to see what was happening.

Multiple neighbors reported seeing a medical helicopter land in the area and leave around the time of the incident. The area is mostly residential.

A white tent is set up in the backyard of residences in a neighborhood in the village of Oregon, where authorities say a Dane County Sheriff’s deputy fatally shot a suspect in several recent weapons violations.


Roberta Rusch, who lives a block away from the scene of the incident, called the incident “unsettling.”

She had been shopping with her daughter in Fitchburg during the day and returned home around 4:15 pm It wasn’t until then, when she saw the emergency lights — which could be seen from almost all sides of the property — that she learned something had happened.

“It’s such a small town, and two events in one weekend,” Rusch said, as she walked her dog, Cooper, near the scene.

This incident comes two days after an explosion at a nearby duplex and after an armed robbery in the area, though it was unclear if any of the incidents were connected. On Sunday, Barrett declined to answer a question about whether the armed robbery was connected to Sunday’s shooting.

This is also the second time this month a Dane County sheriff’s deputy has shot and killed someone. On Oct. 13, Deputy Cody Woods fatally shot 46-year-old Quantaze D. Campbell during an investigation of a stolen vehicle outside a Super 8 hotel in Windsor. Woods has been placed on paid leave pending a DOJ investigation.

Schools in the county receive state aid amounts, all generally the amount expected