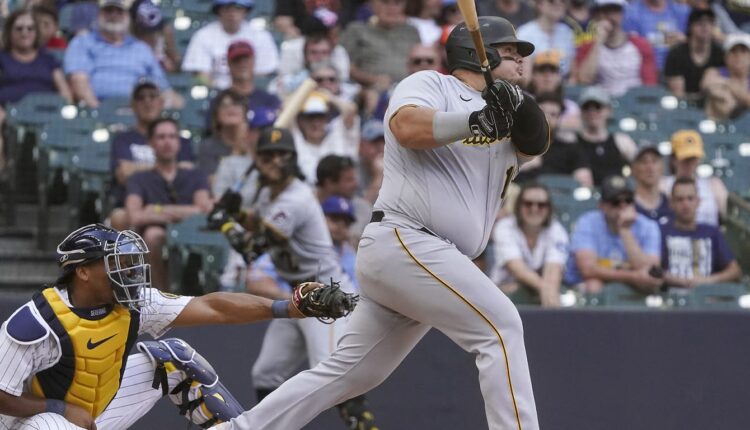 MILWAUKEE — With the Pirates sitting last in the National League Central, it’s very likely that center fielder Brian Reynolds will be wearing a new uniform after Major League Baseball’s Trade Deadline on Aug. 2.

So when manager Derek Shelton sent Jack Suwinski up to pinch-hit for Reynolds in the seventh inning of Pittsburgh’s 8-6 victory over the Brewers on Sunday afternoon, social media naturally began buzzing with rumors of Reynolds’ imminent departure.

But, as is often the case in these situations, there was a more logical — though equally unpleasant — explanation: Reynolds was not pulled for a trade, but instead due to discomfort in his right side.

“He felt it a little bit,” Shelton said. “He was able to play defense unrestricted, but we just didn’t want to test it in an at-bat.

“Obviously with who Bryan is and what he means to us, we weren’t going to risk it.”

Other than that, Sunday was about as good of a day as the Pirates have had all season.

Start with Pittsburgh’s offense, which produced eight runs in a game for the first time since an 8-7 victory on June 30 against Milwaukee, and the 11th time this season.

The Bucs got their scoring via multiple avenues: They hit four home runs, while also manufacturing runs more resourcefully, like when Ke’Bryan Hayes scored on a passed ball after leading off the third with a double, his second of three hits in the game .

Those runs also came at the most opportune times, as Milwaukee seemed to answer every time Pittsburgh crossed the plate, only for the Pirates to answer right back.

After the Brewers tied the game at 2 in the third, Hayes put the Pirates ahead with two outs in the fifth with his fourth homer of the season. Milwaukee took the lead back again with two more in the bottom of the frame, but the Bucs answered back in the sixth with a leadoff homer by Michael Chavis and a two-out solo shot by Oneil Cruz﻿. Neither team scored again until Daniel Vogelbach broke the game open with a three-run blast in the ninth.

While the offense did its part, Pittsburgh’s bullpen made the late-game heroics possible by holding Milwaukee to just two runs over the final 4 2/3 innings, both of which came by way of Andrew McCutchen’s homer with one out in the ninth.

As a result, the Pirates not only won the game, but posted consecutive victories in Milwaukee for the first time since September 2018, while winning a series there for just the second time since the start of the ’19 season.

That, combined with taking two of three from the current division leader, is exactly the kind of boost a team needs in the middle of a daunting stretch of 14 games in 13 days in five cities heading into the All-Star break.

“Winning is hard in the big leagues,” Vogelbach said. “We’ve been on the other side of some games where we just couldn’t get the ball to bounce our way and we’d lose by one run, so games like this are huge. It’s back and forth.

“Any time you can win a series in the big leagues, no matter who it’s against, it’s huge. We have two more series before the break and we have to keep playing good baseball, because we have some good teams ahead of us.”